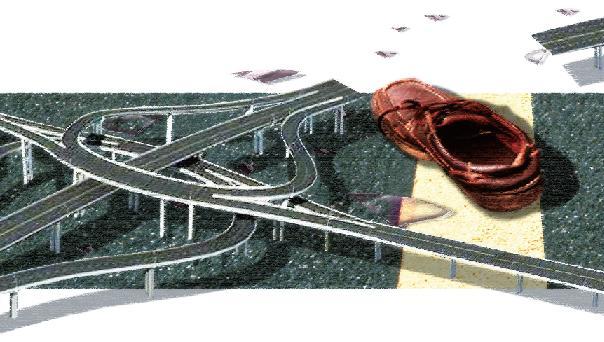 In typical Korean fashion, the nation’s experience with road safety has been one of seismic change over a very short period of time.

The number of people killed in traffic accidents here has almost halved since the turn of the century, when 10,236 people died on the roads, to 5,229 last year.

In 2010, the last year for which international comparisons were possible, the nation had the dubious distinction of having the world’s highest road fatality rate in the Organization of Economic Cooperation and Development.

Lee So-beom, a professor at the Department of Transportation Engineering at the University of Seoul, said that Korea’s problems with road safety stem primarily from its people, rather than infrastructure or vehicle standards, which are both good generally.

“Korea’s road environment is not bad compared to other countries. (In terms of) vehicles, it’s OK ― Korea is the fifth country in terms of the number of vehicles (produced) in the world, but the problem is the people.”

Korea’s rapid motorization ― the number of registered vehicles having rose from a little over 128,000 in 1970 to almost 18 million in 2010 ― coupled with a lack of education has resulted in a dangerous driving culture, he said.

“We have some problems in education. Not only learning knowledge, but we have to learn to respect our people. But in our education system that portion has not been emphasized,” said Lee.

“Changing human behavior is a long-term project, but our presidential period is only five years so nobody is concerned with (creating an) education system to change people’s behavior.”

The public’s poor adherence to the rules of the road also means that effective road features commonly used in other countries have little use in Korea, according to Lee.

While driver behavior may be one of the main culprits in the country’s poor road safety record, experts also indentify deficiencies in planning and road maintenance, as well as other factors, as contributory causes.

“We have many blind intersections, especially in residential areas,” said Kho Seung-young, a professor at the Department of Civil and Environmental Engineering at Seoul National University, adding that greater capital investment is needed to address road hazards.

“There is no control of intersections in residential areas. So there are many accidents between cars and pedestrians compared to other countries.”

Other safety problems arise from bureaucratic failures, according to another researcher in the field.

“Especially, the detail in installing traffic safety facilities is very bad in practice,” said Kim Won-chul, an associate research fellow at the Department of Regional and Urban Research of Chungnam Development Institute.

“This means that engineers do not obey the regulations of traffic safety facility installation. This is because the municipality and policy agency do not have administrative harmony.

The Ministry of Land, Transport and Maritime Affairs is currently implementing its seventh action plan to improve road safety in conjunction with the Ministry of Public Administration and Security and the National Police Agency. The plan aims to see road deaths reduced to 3,000 a year by 2016, bringing Korea in line with the OECD average.

“As Korea, is rapidly transforming into a car society, traffic safety and automobile safety have emerged as areas of attention. However, despite the commitment to continuous traffic and vehicle safety improvements, Korea lags behind in safe driving,” said a spokesperson at the Land Ministry, noting that everything from human behavior and weather conditions to fuel costs had an effect on the number of traffic accidents.

Whether through government efforts or not, the arc of recent years has been a decline in traffic deaths. Last year, however, looks to have bucked that positive trend.

While the official figures are yet to be released for 2012, Kho said that number would surpass that of the previous year, which would be the first rise in more than a decade. One possible reason, according to Kho, is changes made last year to the evaluation and promotion system for police officials.

“They evaluate the captains of police stations across the country. There are many items for the evaluation, but one item was removed last year: That is the number of fatal injuries,” said Kho, arguing that this may have acted as a disincentive to the police enforcing the traffic laws.

“Last year, the KNP did not pay much attention to enforcement, including speeding and many violations of traffic laws.”

Another theory for the rise in deaths is that international conferences such as the 2012 Seoul Nuclear Security Summit diverted police resources away from traffic enforcement.

With a lot done to improve road safety already, the next task for the country, as set by the government, is to bring the number of accidents in line with international levels. Kim said that three “Es” would be crucial to putting Korea on this path.

“We commonly say that we need three ‘Es’ ― education, engineering, and enforcement. Among them, I want to emphasize traffic safety education. With a long-term perspective, education can change the behavior of road users,” he said.

“Related to this, we have to develop safety policies for the elderly to prepare for an aging society.

“Engineering means to develop the design skills for roads, to improve the management of traffic safety facilities with converging advanced IT solutions, and to enhance technologies of vehicle equipment.

“Enforcement should be applied not to simply impose a penalty on road users but to encourage their behavior and sense on the traffic safety.”

Korea could greatly improve road safety if laws were enforced. Unfortunately, South Korea has decided as a nation not to enforce road safety laws, such as speeding, failure to use a turn signal, driving too close to others, and improper seat belt use.

If the government wanted to improve road safety, like other OECD countries do, they would enforce the law by issuing tickets and encouraging new drivers to memorize these rules.

This would mean that Korea should create a serious and well-funded police traffic task force. They should be aggressive about handing out tickets when they have evidence of illegal activity. With this, prosecution should also be more serious and not allow bribery.

When it comes to non-police related issues, cities should be required to maintain crosswalks across the country much better than they do. They should also be required to put sand or salt on the roads for traction on snowy and icy roads.

The Korean government must also reign in on bus drivers and taxi drivers as their speeds and reckless behavior encourage others to drive aggressively instead of defensively.

Fake construction workers waving lights or police lights mounted to poles do little to stop traffic offenders. It is really a shame that Korea, as of 2009, has the second highest number of traffic fatalities among OECD nations per billion kilometers driven.

Traffic safety should not continue to be a second priority to timeliness.

It is very easy to improve road safety in Korea. First, stop selling soju in Korea. Second, remind all Korean drivers that being first is not as important as being alive. Third, all driving school instructors in Korea must be re-trained, and instructed to teach that the safety and security of all other drivers on the highways is the first priority of all drivers. Fourth, instruct all Korean drivers in highway courtesy. Fifth, wake up all Korean policemen who now sleep in their highway automobiles to do their job. Korea is one of the greatest countries on this Earth. I drove millions of kilometers on its highways. I survived by being careful and polite, and considerate.

Salt on the roads and sidewalks in response to snowstorms would help.