Coming to South Korea in 1995, Steve Kim dreamed of a future free from the suppression and poverty he had long suffered in his communist homeland.

Seven years later, life was not as he had hoped. Facing unexpected challenges, the defector decided to leave again for a third country where he could fulfill his aspiration and find genuine peace of mind.

“I risked (my life) to come all the way to the South as I hated the communist system and yearned for freedom. But the reality was different from what I thought it would be,” Kim, now in the U.S., told The Korea Herald.

“Amid the then government’s policy of engaging the North, pro-North Korean groups gained much clout here. We, in turn, felt left out in the cold and feared we would be (politically) exploited.”

What hurt his heart most was deep-rooted social prejudice. People looked at defectors through the political and ideological lens rather than embracing them based on ethnic homogeneity, he said.

“South Koreans do not appear to be ready yet to embrace the defectors. I do have some difficulties here in the U.S., but at least, I feel comfortable as I don’t really have to care about other people’s eyes.” 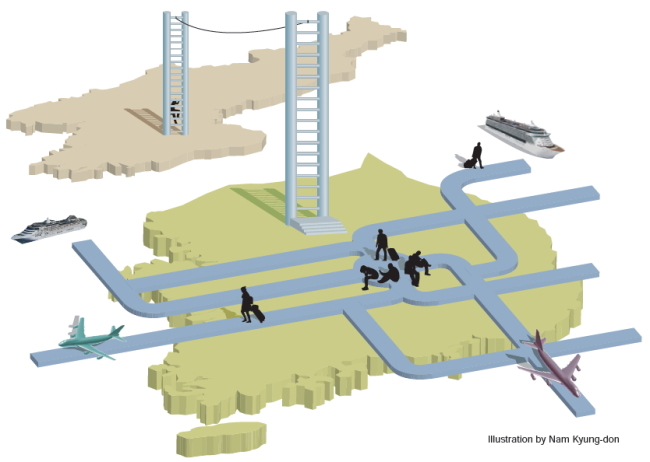 Many of the refugees, who made it to the South, have opted to “re-defect” to foreign countries such as Britain, Germany and Canada as they found little hope for a decent life amid intense competition with more affluent, better-educated South Koreans.

Some land on foreign soil on a travel visa and then discard their passports to disguise themselves as asylum seekers coming directly from the poverty-stricken state. Others take official steps to immigrate to foreign states.

The exact number of “re-defectors” is hard to obtain as each state does not divulge information on refugee applicants to protect their privacy. But experts put it at more than 1,000. The number of official emigrants is 42, according to Seoul’s Unification Ministry.

Timothy Kang, a 26-year defector and college student in Seoul, is preparing to get a job, but is anxious that his fears about alleged prejudice in the hiring process could become a self-fulfilling prophesy.

“I heard that when employers find any word related to North Korea on a cover letter, they just throw that away. So, I just can’t write the cover letter. People here still regard us as foreigners and appear to push us to follow their rules rather than trying to understand us,” he said.

“What makes it tougher to gain good employment is companies here do not recognize any job-related experience we had in the North. On top of that, they demand English and computer skills for which we can hardly compete with South Korean students.”

Kang came to the South alone in 2008 after fleeing the North in 1998 and living in China for some 10 years.

The reality is tougher in the classroom, Kang said.

“Professors deliver their lectures on the premise that we know the basics, which I never heard of in the North. I have to study much more laboriously to catch up with others,” he said.

“Different cultural strains among peers and the ideological frame they squeeze us into the moment we reveal our identity… all these make things difficult for us. I, sometimes, talk about re-defection half in jest, but it is not easy to put that in action.”

Oh Won-hwan, professor at Kyungsung University, noted some left the country as they did not want to see their children struggle through what they see as an unfavorable competition on their way up the social pecking order.

“They don’t want to make their sons and daughters inherit the social, cultural and economic gaps and the relative sense of deprivation, while hoping that a better welfare system in Britain or others will help them have a better future,” he said.

Data on defectors, whose number has topped 24,000, shed light on the level of their difficulties in adapting to their new life in the South.

The survey conducted on 8,299 defectors in January by the North Korean Refugees Foundation found that more than 30 percent of them belong to the low income bracket with a monthly salary of less than 1 million won ($897). Their unemployment rate stands at 12.1 ― 3.3 times higher than the country’s rate of 3.7 percent.

Even though defectors make another critical choice to move yet again for a better future, many often find even tougher challenges waiting.

“Due to language and cultural barriers, many found it about 10 times more difficult to get settled here in the U.S. They also have many conflicts in their children’s education due to cultural differences,” Pastor Moon Jung-im in Los Angeles told The Korea Herald via e-mail.

“As those who had not been well-fed in the North came here and had to labor for a living, many recognize the health limits and wish to go back or have already returned to the South.”

Moon established a Christian church in December 2004 in LA to help North Korean defectors there.

There are, of course, many defectors who have emerged from the periphery and taken center stage in politics, academia, government and other sectors of society. They include Cho Myung-chul who became the first defector elected to the National Assembly this April; and Ahn Chan-il, the director of the World North Korea Research Center well-known for being the first defector to receive a doctorate in the South in 1997.

Since the South enacted a law supporting North Korean refugees in 1997, the government has implemented a series of programs to support issues ranging from housing to cultural adaptation and job training.

The Unification Ministry’s budget for defector-related programs is 123.9 billion won, accounting for 58 percent of its total budget for this year. Together with provincial governments’ budgets, the total public funds for defectors are much greater.

But refugees do not seem to feel that their life has been satisfactory.

“Their ‘relatively’ poor status, compared with South Koreans who look the same and share the same ancestry plus prejudice and discrimination are quite unbearable for them,” said Kim Young-hui, a defector and economic expert at the state-owned Korea Finance Corporation.

“If they are discriminated against by those with different skin colors, it, then, might be more bearable. Every defector seems to go through a transitional period or sort of a slump about a year and half following their defection. Those who fail to overcome it may opt to re-defect.”

Kim crossed the border into China with her husband, mother-in-law and two sons at the Tumen River in August 2002. She then entered the South via Mongolia in December of the same year.

Kim added that the government policy has been well established so far, but the problem lies in its implementation.

“Many programs are a one-time event. Those in charge of them do not appear sincere in embracing the defectors. They look like they are just doing it as it is their job and duty. They should first read the minds of defectors,” she said.

A researcher expressed concern that all the talk about re-defection could produce a negative refugee image.

“I am concerned that the defectors could be seen as having betrayed South Korean society. As they have freedom to choose their own life, it should be seen from that perspective,” said the researcher who declined to be named.

“And, of course, they are to take responsibility for their choice. There are actually some who came to the South to make preparations to move to other foreign states.”

Amid growing calls to check policies for defectors, the government has begun looking to improve them. Critics have argued that the authorities should craft more systematic and efficient programs for the defectors in order not to waste taxpayers’ money.

“The reasons for re-defection are varied as South Koreans have different reasons for their immigration. We need to pay attention to its prevention, but also need to focus on helping the defectors here better adapt to society,” a Seoul official said on condition of anonymity.