Behind the glamour: S.M. stars retrace their beginnings


Ever wondered what it takes to be BoA or a member of Girls’ Generation?

Expect to spend at least seven to eight years training before making your debut. Forget hanging out with your friends ― you go straight to singing lessons right after school. And if you are not from Seoul, where the vocal and dance training take place, you may have to live away from your family, even if you are only a fifth grader.

Korea’s major K-pop and talent agency S.M. Entertainment has created a documentary film ― titled “I AM” ― to once again glorify their New York concert at Madison Square Garden last year. The movie links the highly successful event to the idols’ years of tears and sweat.

Yet it seems like the 32 S.M. stars ― the legendary boy band H.O.T. member Kang Ta, pop singer BoA, and members of S.M.’s top idol groups Girls’ Generation, Super Junior, SHINee, TVXQ and f(x) ― didn’t have to do much extra work for the upcoming picture. “I AM” is a cinematically edited version of S.M.’s 16 years of archived video footage ― from the idols’ younger days as aspiring stars and S.M.-trainees to the day of the Madison Garden triumph last year.

“Oh, this is why they taped us back in the days,” says f(x)-member Sulli in the trailer, as she watched footage of her younger days as a trainee.

“I’m from Busan, so I’ve had to live away from my parents since I was a fifth grader,” the girl group member told reporters during a press meeting on Monday. “I very often missed my parents. That’s when I regretted my decision the most.” 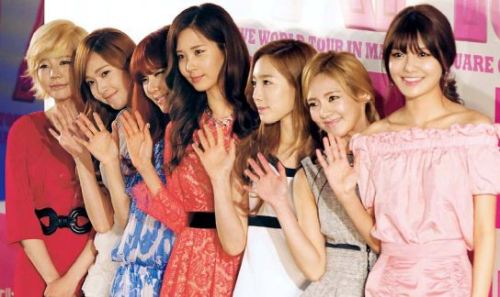 The agency unveiled a seven-minute trailer of the film during the Monday event. It was both refreshing and touching to see the idols’ elementary school days as trainees, from Girls’ Generation member Seohyun’s pudgy, baby face when she awkwardly introduces herself, to Super Junior member Sung-min’s struggling moments during a voice lesson, being scolded by his trainer.

Director Choi Jin-seong said the upcoming picture is very much like “Billy Elliot,” the 2000 British drama about an 11-year-old boy who dreams of becoming a ballet dancer.

“This film is all about having a dream,” said Choi during the event. “Just like how Billy somehow becomes a dancer against all odds, I wanted to explore how these 32 individuals made it through the seven to eight years of training, which equals about 43,800 hours, just to become who they wanted to be. The climax is, of course, the New York concert at Madison Square Garden, which has been the dream venue for most of the 32 idol members featured in the film. The movie is also about growing up in that sense.”

Among the 32 featured stars, the oldest is Kang Ta, from S.M.’s first boy band H.O.T. The popular five-member group, who are now often considered the forerunners of K-pop idol bands, made their debut in 1996 and disbanded in 2001. Kang shared the early days of S.M. Entertainment before the debut of H.O.T., as well as his life as a trainee back in the 1990s.

“At the time, there were only four staff members at S.M., including the CEO Lee Soo-man,” Kang told reporters.

“We didn’t have many things. We were trained at this house located in a residential area of Songpa district of Seoul. There were no mirrors, so we had to use house windows at night to check our dance moves. The most expensive meal we were allowed to order was jajangmyeon (Korean-style Chinese black bean noodles). Once my fellow member Tony ordered japchae rice and got into trouble for two days. It wasn’t even imaginable to dream of performing at Madison Square Garden at the time.”

The S.M. singers kicked off their famous world tour in August of 2010, and performed at seven major international venues, including Zenith de Paris and Tokyo Dome. Last year’s New York concert was the last show of the tour, performed at the “dream venue” Madison Square Garden ― where mega pop stars such as Michael Jackson, Beyonce and Lady Gaga have held concerts. The 15,000 seats were all sold out.

“When I first got on the stage of Madison Square Garden, the first thing I did was to look at my feet,” said U-Know Yunho of TVXQ.

“I’ve been a huge fan of Michael Jackson, and it was just amazing to stand on the stage where Jackson once performed. And it was more meaningful because I got to perform with my label-mates at the same time.”

Girls’ Generation member Soo-young said the film has made her think of her beginnings.

“I recently got to see some parts of the movie,” said the girl group member. “And it reminded me of my younger days as a trainee that I had forgotten for a while. I’m sure the movie will be a great treat for my fans, but it really is a great gift for me as well.”

A CJ Entertainment release, “I AM” opens in local theaters on May 10.

The film will also be released overseas, although the dates have yet to be announced.