Economists note a failure to properly respond to currency fluctuations could lead to sparking foreign capital flight or dampening exports that have shored up Asia’s fourth-largest economy.

The won has depreciated against the US dollar in recent weeks as the global shock waves prompted by the prospect of steep US rate hikes hit local financial markets. 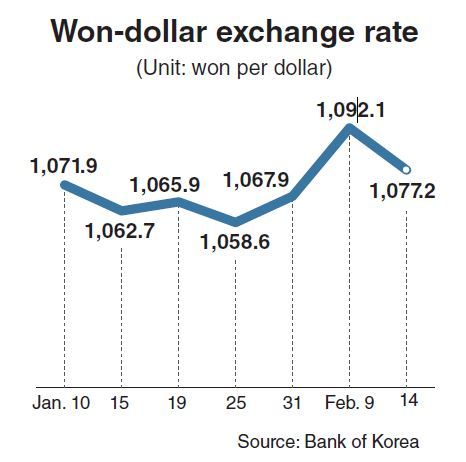 Foreign investors net sold Korean shares worth more than 1.6 trillion won ($1.49 billion) during the first five trading days in February, erasing their net purchases for the whole month of January.

Analysts say the rate is likely to rise above 1,100 won again if foreign investors continue to sell off Korean equities and bonds in keeping with US rate increases this year.

A possible escalation of geopolitical tensions on the Korean Peninsula following the end of the PyeongChang Winter Olympics could precipitate the exodus of foreign capital.

“Foreign exchange authorities should exert efforts to prevent the exchange rate from rising rapidly and ensure foreign capital exodus will not take place,” said Kim Jung-sik, a professor of economics at Yonsei University.

Policymakers here find it hard to move beyond repeating verbal interventions to curb fluctuations in the foreign exchange market as Korea is under close watch by the US Treasury for possible currency manipulation.

In this circumstance, attention is focused on the rate policy of the Bank of Korea, which held its base rate steady at 1.5 percent in January.


Next month is likely to see a US benchmark rate exceed Korea’s key rate, making the first rate reversal between the two economies in 11 years.

Acting on price hikes bolstered by full employment and rising wages, the US Federal Reserve is predicted to raise the federal funds rate by a quarter percentage point to a range of 1.5 percent to 1.75 percent at its next policy meeting as part of the widely expected four rate hikes this year.

The BOK, however, remains cautious on additional rate hikes, held back by a set of negative factors, including low inflation and mounting household debt.

Most analysts forecast the central bank will probably be pushed to increase its key rate by a quarter percentage point in April or May if the Fed’s first rate hike this year comes next month as expected.

From then on, the BOK will continue to grapple with the thorny task of striking a subtle balance between US rate increases and domestic economic conditions.

Kim said the central bank needs to keep a close watch on currency movements down the road to set up the pace of rate increases.

If the won-dollar exchange rate keeps an upward trend, BOK policymakers would be pushed to raise interest rates more aggressively to prevent foreign investors from yanking their money out of local financial markets.

They are also set to face growing pressure from economic aides to President Moon Jae-in to increase rates at a faster pace to help keep in check rising property prices.

In this regard, economists say, the successor to BOK Gov. Lee Ju-yeol, whose four-year term expires at the end of March, should be a figure who can be trusted to navigate monetary policy adroitly and without being swayed by political pressure.

Korea saw outbound shipments soar 22.2 percent from a year earlier to more than $49.2 billion in January on brisk shipments of memory chips and petrochemical products, according to government data.

The prospect of a continuous increase in exports, however, is being overshadowed by mounting protectionism in the US and intensifying competition with Chinese manufacturers in both traditional and high-tech sectors.

Kim said raising interest rates needs to be matched with measures to encourage corporate investment if the economy is to avoid being slumped by higher borrowing costs.

Economists note expanding currency swap deals with major economies would serve to guard against a possible exodus of foreign capital without jacking up rates above what could be seen as a proper level.

Korea is set to sign a swap arrangement worth $10.6 billion with Switzerland on Tuesday. It will be the eighth currency swap agreement the country has concluded on a bilateral or multilateral basis.

In November, Korea sealed a standing swap accord with Canada after agreeing to extend a swap deal worth $56 billion with China a month earlier.

Korea is also pushing for the conclusion of a currency swap agreement with the UK.

“There will be obstacles to reaching an agreement, but both sides share interests (in concluding a bilateral swap deal),” said a government official here, requesting not to be named.