A marriage in the chaebol family has always been a subject of interest for the public, partly for the glamour and more so for the anticipated development in the succession of managerial power.

Here is a look at the family tree of Chung’s sons-in-law in particular. 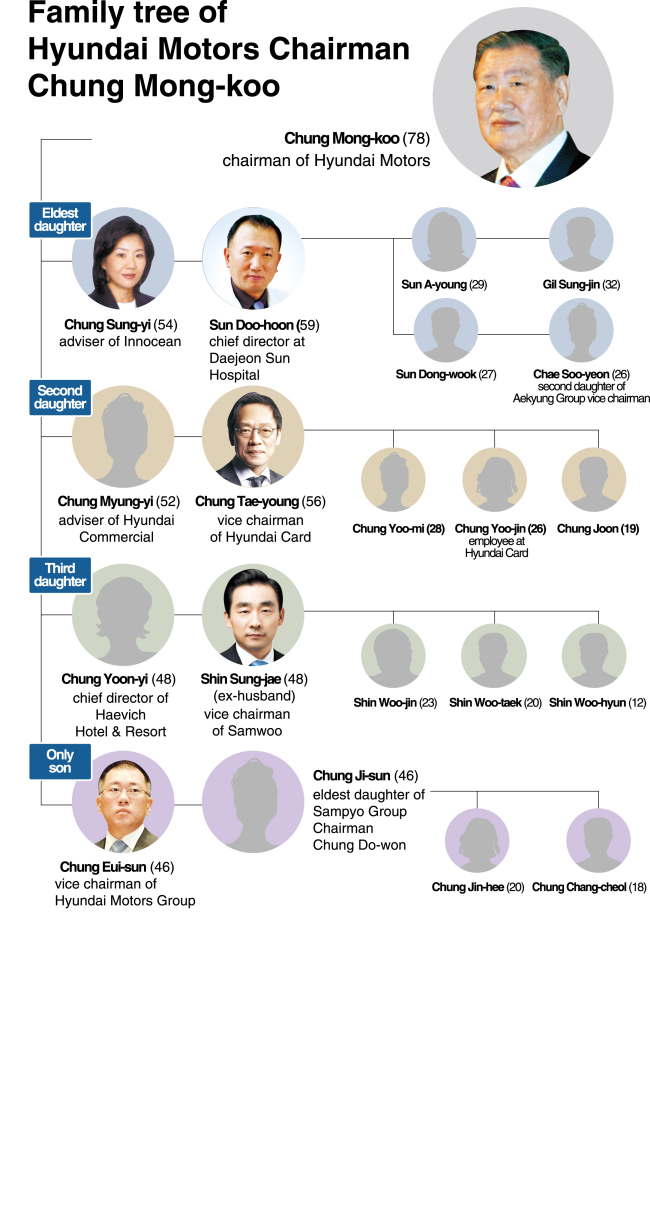 Since their marriage in 1985, she has not taken up any business role until she was named as chief director of Haevich Hotel & Resort in 2003.

According to The Superrich Team’s analysis, Chung Sung-yi is the country’s 74th wealthiest businessperson, owning a total of 363.9 billion won ($314.3 million) in stocks. Her husband Sun Doo-hoon debuted his artificial joint manufacturer Corentec on the tech-heavy Kosdaq.

Sun’s 7.66 percent of Corentec shares are estimated at 11.3 billion won as of Oct. 4. Doo-hoon’s children A-young and Dong-wook own a 0.11 percent in Corentec respectively.

The latest married couple Gil Sung-jin and Sun A-young were friends before being romantically involved.

Gil has a business diploma from Georgetown University and worked for Hyundai Motors for a while. He is now known to run a craft beer house called “Namsan Chemistry” in Itaewon, Seoul.

His father Gil Yong-woo owns the building where “Namsan Chemistry” is located. Including the building, Gil owns 30 billion won worth real estate assets.

According to industry sources, the senior Gil purchased the two-floor building in October 2014 under the joint names of his wife and son. The building sits on a 413 square meter land. Out of the 6.22 billion won used to purchase the building, 4 billion won was a loan.

He also owns another three-floor building, sitting on 1730 square meters in southern Seoul. The building is close to Sadang subway station. It has a supermarket chain and franchised restaurant inside. The building is estimated at 28 billion won.

Chung Myung-yi, an executive of Hyundai Commercial and second daughter of Chung Mong-koo, is married to Chung Tae-young, vice chairman of Hyundai Card.

Chung Tae-young earned a diploma in French from Seoul National University and completed his MBA at MIT. Starting his career at Hyundai Trading in 1987, Chung was relocated to Hyundai Mobis and Kia Motors. He took the helm of Hyundai Card in 2003 as vice chairman and has led the finance sector of Hyundai Motor Group since then.

In 2005, Chung inherited 57 percent of shares in Jongno Academy. It was later acquired by Haneul Education.

Chung Mong-koo’s third daughter Yoon-yi, an executive director of Haevich Hotel & Resort divorced Samwoo Vice Chairman Shin Sung-jae in March, 2014. Along with the divorce, Shin left Hyundai Hysco which he had been running for ten years.

By The Superrich Team (jiwon.song@heraldcorp.com)