Samsung Galaxy retains No.1 spot in brand value despite recall 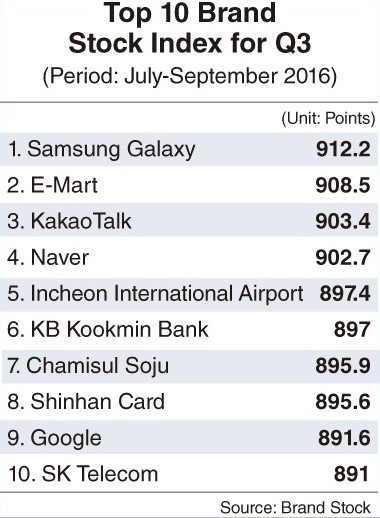 Samsung‘s quick reaction to the battery issue with its Note 7 smartphone appears to have received a positive evaluation from the market, the Seoul-based company said in a statement.

The fate of the mobile brand by the South Korean IT giant will be determined on the success of the company’s recall measures, it added.

The world’s largest smartphone maker launched the Galaxy Note 7 series in August, but shortly after announced an unprecedented recall of 2.5 million units worldwide and suspended sales of its Galaxy Note 7s on Sept. 2 following multiple reports of the device catching fire due to faulty rechargeable lithium batteries.

More than 60 percent the Galaxy Note 7s have been recalled, Samsung Electronics said, noting that about 90 percent of its users in the US chose to exchange their defective smartphone for a renewed Galaxy Note 7 instead of filing for a refund.

Samsung Electronics resumed sales of Galaxy Note 7s in Korea last Saturday, equipped with batteries that meet global safety standards. A green colored battery icon has been placed at the upper right side of the screen on the renewed model, the company said.


Meanwhile, the brand value of Lotte Department Store, a retail chain unit of Lotte Group, was ranked 16th from 8th in the previous quarter, due to the prosecution‘s probe into the owner family. Not only the department store unit, the brand value of Lotte’s other affiliates from rental car service to its fast food chain, also retreated over the period, the Seoul-based researcher said.

The market researcher conducts studies on the nation’s 1,000 brands in 230 sectors on a regular basis to select the top 100 brands.