The art of Korean traditional liquor

You have to look at the color, smell the aroma, sip and hold it in the mouth for several seconds before letting it slide down the throat and enjoying the slowly spreading scent inside the nose and throat.

“A good soju is soft and makes you smile,” said artisan Kim Taek-sang at his brewing studio at Samcheong-ro in Jongno, central Seoul.

Kim, who was named Seoul Intangible Cultural Asset No. 8 in 1990, has carried on the centuries-old tradition of brewing Samhaeju, one of the oldest kinds of traditional liquors in Korea, dating back to the late Goryeo Dynasty (918-1392).

The Samhaeju soju -- 45 percent alcohol by volume -- he offered contained a soft, velvety aroma that doesn’t make one cringe despite its much higher percentage of alcohol than contemporary soju.
The history of traditional Korean liquor goes back as far as the Goryeo Dynasty and Joseon era (1392-1910). There are some 20 alcoholic beverages that represent each Korean province, including Andong Soju in the Gyeongsang region and Munbaeju in North Korea.

Among other drinks, Samhaeju soju was exclusively enjoyed by aristocrats and kings in Hanyang, the former name of Seoul, during the Joseon era.

“Soju was not a popular liquor available for everyone because its main ingredient, rice, was one of the most valuable commodities back then,” said Kim.

Soju -- the distilled extract of fermented rice mixed with yeast and filtered several times -- was a high-end alcoholic beverage. When the rice supply fell short, a king even had the right to ban production of soju across the country. Traditional soju making, therefore, was carried out by noble families who could afford rice and made their own yeast. 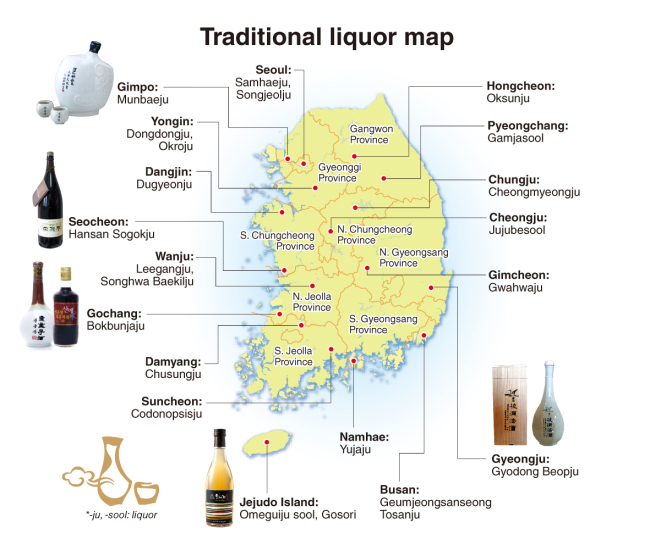 The term “Samhae,” a combination of the number three and “pig,” represents the lengthy process of the traditional liquor making, and the wish for high-quality clear liquor. The pig is the last and slowest animal among the 12 Chinese zodiac signs with clear blood. The official process of making Samhaeju starts on the first lunar pig day of the year, which falls around mid-February this year.

Even during the alcohol ban during the Joseon era, houses with infirm patients were allowed to make “yakju,” which literally translates to medicinal liquor. Yakju is still commonly used to refer to alcoholic beverages in Korea.

“The right amount of yakju revitalizes one’s life,” Kim said. Samhaeju yakju has a strength of 15-18 percent alcohol by volume.

Kim holds regular liquor-making classes for Korean visitors at his studio and customized tours for foreigners who make reservations in advance to raise awareness of Korean traditional liquor.

He stresses more research should be done on traditional liquors, especially yeast.

Not many contemporary liquors use natural yeast anymore. They buy cheap yeast catalyst from Japan to mass-produce popular liquors like soju and makgeolli more quickly.

“A good liquor should be made using yeast,” he said. “That’s why the quality of alcoholic beverages today falls short of what traditional liquors used to be.”

He believes investing in research on Korean traditional liquor and yeast will help upgrade the overall quality of Korean alcoholic beverages.

“One cannot survive without liquor. Whether you are happy, or sad, it’s always with you,” he said.