On a Sunday afternoon inside the Taeneung ice rink in Seoul, a group of boys stands in line on the ice wearing rubber-soled shoes.

Nine-year-old Yang Ji-min squats with one hand on the ice and the other clutching a broom and inches forward, sliding on his left foot with the other leg stretched out behind.

He is practicing the basic skills of curling, a Winter Olympic event still quite new to Korea.

One by one, the other students follow suit. Some slide smoothly with minor wobbles along the way, but some slam their knees into the ice.

According to Ahn, the sliding foot should be flat on the ice, hips and shoulders square to the delivery line. Learning how to balance is not easy, but once mastered you will be able to launch the 20 kilogram stones across the ice, she added.

The Seoul Curling Club’s beginner program provides basic instruction on curling. The initial hour is focused on technique, and the fun part starts when the participants break into teams for games.

Yang Wu-jin, 9, who is participating in the program for the second time, described it as “really fun.”

“I like sliding and throwing stones,” he said with a big smile.

“It’s like bowling, everyone can play it, though it takes a great deal of time and practice to be a good curler.” 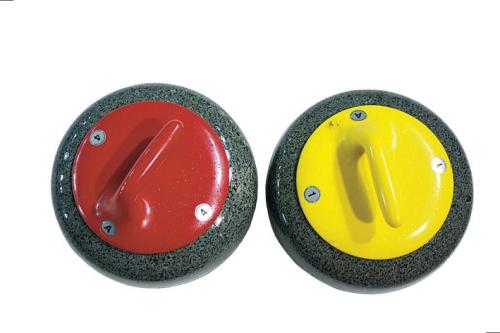 A team earns points based on the number of stones closest to the center of the target. The closer the stones are to the target, the more points are earned.

Matches last 10 ends ― an end is similar to an inning in baseball, each team gets eight stones per end, two for each curler.

The scoring is quite simple, but that’s where strategy comes into play, according to director Yang.

“I think the biggest attraction of curling is the strategy. It’s like chess on ice,” he said.

In each team, there is a first, second, third and fourth thrower. When the first curler throws the stone, two other teammates sweep the ice with their broom to help it slide along the 45-meters long curling sheet toward the button. The fourth thrower, who is called the skip of the team, also instructs delivery of stones at the other end of the sheet.

“You have to consider many things before throwing a stone. You can deliver it close to the circle’s center or place it in your opponent’s way and also bump out other stones.”

So naturally, in curling the delivery is most important. Even top class players like Yang practice the same postures and techniques countless times every day.

Yoo Ji-ung, a member of Seoul Curling Club, has been curling for two years. The 27-year-old said he was surprised at first by the difficulty of casting the stone.

“It’s a lot harder than it looks,” he said after practicing his stone release.

Know how to curl

A curling sheet is not smooth like speed skating ice. It is rough, which means the stone has some traction on the ice.

“Before a game we use little water droplets to make tiny raised bumps on the ice. It’s called pebbling,” the 38-year-old Yang said.

This pebbling makes the stone curl, allowing even a 9-year-old to throw, he explains.

“You give the stone just a little turn, and it sails off.”

Yang added: “But because of the spin, even the slightest difference in angle from the delivery line makes a huge difference.”

Brushing, more commonly known as sweeping, is also an essential skill in curling.

“It can affect a stone in two ways ― the distance a rock travels, and the degree to which a rock curls,” Yang explained.

By sweeping, one can remove the pebbles on the surface, reducing the friction between the stone and the ice. So if one wants a stone to keep moving fast and also straight, you scrub the ice with brooms, he added.

Curling is a fun and strategically complicated game, but can it be good exercise?

“Of course. You use your arms a lot in sweeping. When I first played 10 ends, I couldn’t lift my arms after the game,” said Yoo.

Yang has always loved athletics, but his passion for curling has provided the Seoul Curling Club and other Seoulites an opportunity to follow his lead.

Yang admits that curling is still in its infancy here. There are only two curling rinks in Korea, one of which is the Taeneung Curling Rink. The other is in Iksan, North Jeolla Province.

“I believe if we had more rinks, more people would follow it, because curling is very addictive,” he said.

The popularity of the sport, he said, is slowly growing.

“We have a total of around 300 registered members with a wide mix of backgrounds and ages. And about 50-60 people come out to play from time to time,” he said.

The club’s home Taeneung Curling Rink has two curling sheets, giving locals a unique opportunity to learn the sport. Yang leads the club with the help of a number of volunteers.

“My goal is to get more people out.”

For now, curling’s appeal to mainstream local fans appears to be only a minor, but Yang has high hopes that Korea will become home of curling in Asia when it hosts the 2018 Winter Games in PyeongChang.

He said that he believes Koreans have an advantage in curling.

“Because we use chopsticks all the time, Koreans tend to have a good grip of stones. Koreans also generally have more flexible legs than Westerners,” he said.

“But curling is something you don’t have to be in top shape to play. It’s just a fun game, and something that you can play together with your friends,” he added.

For those who are new to the sport and want to learn the basic techniques, various tutorial programs are available at Seoul Curling Club. Also, a social curling group meets every Sunday at the Seoul Curling Club, which one can join for free. For more information, visit Seoul Curling Club at http://cafe.naver.com/yjbcurling or call (02) 2699-1441.