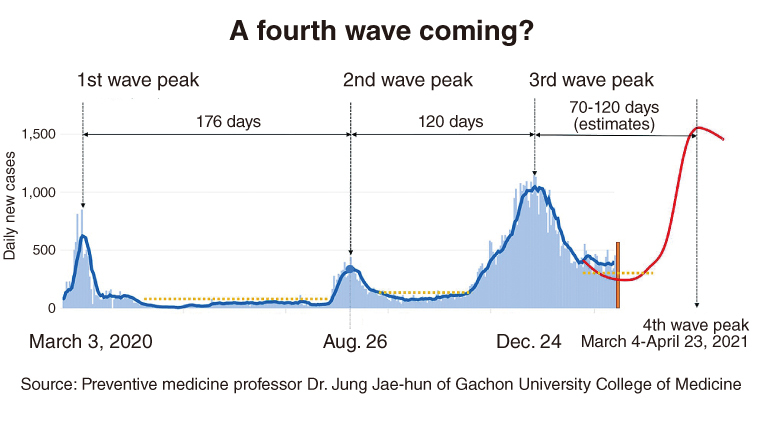 COVID-19 cases are on the rise again in South Korea after a brief respite from the winter resurgence, and experts warn that the country may be heading toward what may be its largest wave yet of the pandemic -- and sooner than anticipated.

Just two days after social distancing regulations were eased, the number of daily cases rose to 621 on Wednesday, the highest since mid-January in the immediate aftermath of Korea’s third wave of COVID-19, which sickened over 35,000 and killed nearly 700.

Preventive medicine specialist Dr. Jung Jae-hun of Gachon University says Korea is on a trajectory that is worse than what was shown in his Jan. 27 modeling.

“The numbers being registered now are higher than the forecast that I had made three weeks ago,” he said.

According to his model, the case rates during the first two weeks of February should have been on a decline. Instead, they have been demonstrating a concerning upward trend.

“It took 176 days for Korea to get to the coronavirus second wave after the first, and 120 days until the third. You notice how each wave expedites the arrival of the next one,” Jung said.

He had projected the fourth peak could approach Korea 70 to 120 days later, sometime between March 4 and April 23. Now, he says it appears to be “advancing faster than (he) thought.”

“Crowds are returning to bars and nightclubs, and more often than not, masklessly,” he said.

“The government eased social distancing with the intention to protect local businesses, not to encourage risky behaviors by any means. I urge you to not take this as an opportunity to exercise less caution,” he said.

The policy change that came into effect Monday moved the curfew from 9 p.m. to 10 p.m. for potential high-risk businesses and removed the closures on commercial escort bars, which are often fronts for the sex trade.

Jung of Gachon University pointed out, however, that an increase in the number of cases as a result of that change will not manifest until at least a week or two weeks from now.

“That’s about how long it can take a person exposed to the virus to become sick enough to seek help. So there is a delay before the impact of the relaxed rules is reflected in the data,” he explained.

“The current numbers are from the days leading up to Seollal, which is why it would have been more prudent for us to wait and monitor the trends post-holiday before implementing a change,” he said.

“Surely, the decision makers are aware that moving away from social distancing means rekindling the spread of the virus in exchange for an economic boost. That is the choice that was made by the government, and unfortunately, it’s not possible to have it both ways.”

In a news briefing held the same day, senior health official Yoon Tae-ho said the government “recognizes the possibility of a resurgence in March or April” in response to a press inquiry, and that it was well-prepared for it.

“After the third wave of infections, our system has been complemented to be able to manage up to 1,000 cases per day for as long as around three weeks,” he said.

But should another wave come, the number of cases will likely surge past the December peak, according to infectious disease specialist Dr. Kim Tark of Soonchunhyang University Medical Center.

“The next wave will be more substantial than the last, and the understanding among the country’s top experts is that Korea could be seeing a daily count of about 2,000 cases this time,” he said.

He pointed out that the even past surges of smaller sizes had exhausted the country’s hospital beds, leading to some patients dying at home without ever having access to treatment.

“That leaves us with no other option than to control the number of people getting sick with COVID-19, rather than leaving it up to our health care systems to bear the strain. And this can only be achieved through rigorous physical distancing and face mask wearing.”

Kim also warned of the future spike in infections possibly coinciding with the vaccine rollout, which will mean the health care workforce being stretched even thinner to deal with the influx of patients as well as vaccinations.

“It’s regrettable that the vaccination scheme had to be adjusted to leave out vulnerable populations at nursing homes. Without their vaccinations, Korea will have one less valuable tool for reducing hospitalizations and deaths,” he said. One in 3 deaths recorded between December and mid-January affected residents of nursing homes and other long-term care facilities.

The biggest setback facing Korea’s progress in the pandemic was the delay in vaccinations, agreed virologist Dr. Paik Soon-young of Catholic University of Korea.

“It looks like mass vaccinations won’t begin until summer, and that puts us very behind,” he said.

“For the first half of the year, the people eligible for vaccinations are about 43,000 residents and workers at nursing homes under the age of 65, and some 55,000 health care workers on the front lines -- which won’t be sufficient to suppress the transmission in a meaningful way,” he said.

“The prime minister spoke of the Novavax vaccine arriving in the second quarter, but it can’t be expected to be ready in time seeing that it is yet to be authorized. This leaves us with no supplies to protect the people at higher risk.”

He went on, “Once again social distancing is the best weapon available to us at the moment, and in doing so, reasonable compensation to small businesses and other vulnerable workers has to come simultaneously in order to make it viable and sustainable.”