By Son Ji-hyoung
Published : Dec 17, 2020 - 18:07       Updated : Dec 17, 2020 - 20:23
The Korea Herald is publishing a series of special reports on the glass ceiling in the financial industry, focusing on South Korea’s market compared to other major economies. Funded by The Korea Press Foundation, the series will evaluate where Asia’s fourth-largest economy stands in terms of gender equality, reflect on changes being made, and explore ways to boost inclusion in the sector. -- Ed.

The COVID-19 pandemic has been both an opportunity and a crisis for the world of finance and investment, testing decision-makers’ ability to navigate the fog of uncertainty. Minimizing risks has been the key to survival this year, putting a gender-diverse investment environment into the limelight, experts say.

As the tide went out earlier this year with the downturns accompanying the coronavirus pandemic, women-led funds were found to be less exposed to risks, faring better overall.

For example, US hedge fund data firm Hedge Fund Research showed that the HFRI Women Index and HFR Women Access Index gained 12.38 percent and 11.73 percent, respectively, from January to November. They outstripped the performance of the broad-based HFRI 500 Fund Weighted Composite Index, which returned 6.08 percent over the cited period.

This led global investors to pay attention to diversity during the recent economic crisis. Aberdeen Standard Investments, managing over $560 billion worth of assets as of June, is considering passive strategies by teaming up with HFR, with one of them likely to be women-themed.

Creating a gender-diverse environment is crucial as it often leads to better decision-making, said Junjie Watkins, chief executive officer of Asia, excluding Japan, at Pictet Asset Management, which managed $225 billion in assets as of September.

Women-led funds are unlocking their potential to stave off downside risks, given their reputation for being risk-averse, another investment professional said.

“We (as a female-led hedge fund) can sometimes be overly analytical but more focused on trying to provide transparency, rather than just pitching you a dream,” said Monica Hsiao, chief investment officer at Hong Kong-based Triada Capital.

Triada cited female fund managers’ tendency to fully represent a picture instead of hinging on “sound bites” in fund marketing. The company won the Eurekahedge award for best Asian credit long-short fund earlier in December with an 8.06 percent return from January to November.

“We spend time running through that to make sure allocators can understand and appreciate our approach and see that we have a replicable process and the market experience of having traded through many cycles, rather than just stating some return target that no one can guarantee.”

Slow as it seems, the global fund management industry is moving to make progress on gender inclusion in recognition of the positive impact of a diverse environment.

Some investment firms have not only strived to achieve gender balance across the financial services that they provide, but also demanded that their portfolio companies achieve gender diversity in consideration of the values they hold, experts say.

Such recommendations effectively impose gender quotas on the large-cap firms in which they invest or advise others to invest.

Multinational asset management firm Federated Hermes, which oversees $615 billion in assets, recommends to its clients that they vote against the chairs of FTSE 350 companies that have less than 33 percent women on their boards at annual shareholder meetings, endorsing the guidelines set out by the UK government-backed voluntary framework Hampton-Alexander Review.

At the same time, internally, Federated Hermes is aiming for at least 35 percent of its senior management roles to go to women by 2021. The September 2019 figure came to 31 percent, from 24 percent four years before.

French asset managers including Amundi Asset Management and Axa Investment Managers are moving in tandem to force constituents of the broad French stock market index SBF 120 to have management teams consisting of at least 30 percent women.

“(Gender diversity) reduces the risk of ‘group think’, widens the talent pool to ensure the best candidates are found and equips the board to effectively serve the company and its stakeholders,” said Amy Wilson, UK engagement lead of EOS at Federated Hermes, a stewardship provider.

“Beyond the board, diverse perspectives throughout an organization are also likely to more accurately reflect employees, customers, and suppliers across the company’s geographic footprint.”

Willis Tower Watson, a global advisory investment service provider with over $2.6 trillion in assets under advisory, laid out in October an action plan to accelerate the pace of improving gender diversity at asset management firms, urging them to set targets for diversity in talent sourcing and portfolio construction. It cited a “positive link” between the diversity of investment management teams and their long-term performance outcomes, as seen in a white paper titled “Diversity in the Asset Management Industry.”

Korea is notorious for having a stubbornly low proportion of female senior employees in the investment universe, and signs of progress are hardly visible. 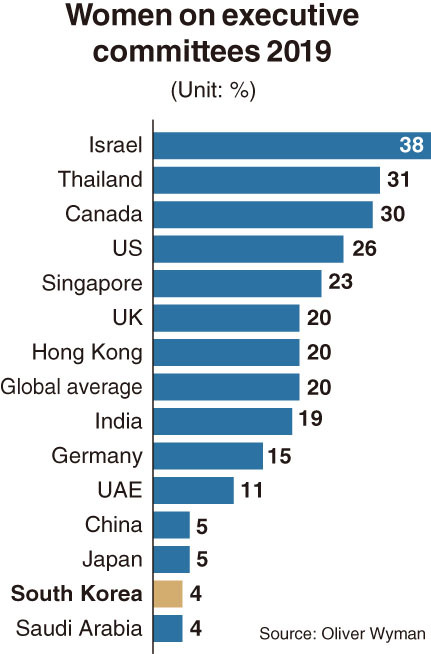 Across all major financial services firms, women accounted for 4 percent of members of executive committees in Korea in 2019, lagging far behind the global average of 20 percent and putting the nation at the bottom of the table with Saudi Arabia, according to the latest data compiled by management consultancy Oliver Wyman. The figure remained unchanged since 2016.

This highlights a possible link between the deeply rooted male dominance and the aggressive nature of the domestic fund industry, which has led to a series of hedge fund missellings, setting back efforts toward more transparent, more rational and less risky decisions.

Korea’s fund industry has paid a hefty price over the past couple of years, as some hedge fund managers and sellers were found to have turned a blind eye to the risks that the target assets implied.

Some are accused of colluding with each other to conceal their losses and defraud clients, or even faking the assets in marketing. Those billion-dollar fund debacles involved hedge funds such as Lime Asset Management, which was once considered the nation’s largest by assets under management.