The Korea Herald is publishing a series of special reports on the glass ceiling in the financial industry, focusing on South Korea’s market compared to other major economies. Funded by The Korea Press Foundation, the series will evaluate where Asia’s fourth-largest economy stands in terms of gender equality, reflect on changes being made, and explore ways to boost inclusion in the sector. -- Ed.

In the face of the unprecedented pandemic crisis, improved gender equality is no longer a matter of choice but a crucial way to “build back better” by using all human talent available.

The Business & Sustainable Development Commission, a Davos-initiated two-year body, claimed in its 2018 report that the powerful role of women leaders and the diversity they bring could help unlock some $12 trillion worth of new market opportunities.

While this applies to all sectors, it is the financial world that particularly lags in terms of gender balance, even when compared to other high-status fields such as law, medicine and academia.

In its 2018 report “Women in the Workplace,” McKinsey found that women in the US financial services begin their careers at parity with their male colleagues, accounting for more or less equal shares of entry-level staff, but account for just 19 percent of C-suite executives.

When it comes to Asia’s fourth-largest economy, the gender exclusiveness of finance stands out even more -- partly due to the social environment.

According to a survey conducted by Gallup Korea exclusively for The Korea Herald on 517 individuals working in the financial sector, 50.5 percent of the respondents acknowledged the existence of a glass ceiling in their company while 60 percent agreed that the gender disadvantage at the top level in South Korea was stronger than in other developed countries. And 41 percent were pessimistic about expectations on the invisible barrier being removed before the end of their careers, outnumbering the 25.5 percent of respondents who were optimistic. 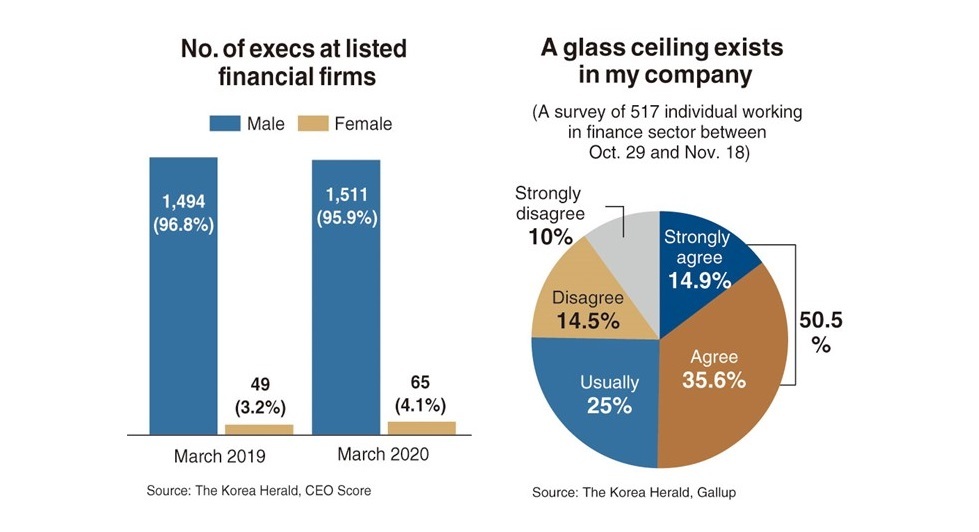 Just over half of the respondents attributed Korea’s relatively low female representation at leadership level to the gender bias that considers housework and parenting to be women’s role.

Nearly 60 percent of the respondents said they thought men usually take higher ranks at financial institutions and companies here, three times more than those who disagreed.

As of the end of 2019, women occupied just 3 percent of positions on the boards of financial companies in Korea, visibly lower than the double-digit figures observed in most developed countries. France topped the Gallup survey with 44 percent, followed by Germany with 32 percent and Britain with 30 percent. The corresponding figure for Japan was 6 percent.

Also, 31.9 percent of survey respondents said that the glass ceiling was more rigid in finance and insurance than in other sectors, while 42.7 percent picked the construction industry.

This gender inequality has raised concerns that it may limit the perspective of decision-making bodies.

In most related questions, nearly half of the respondents said that a balanced gender mix at board level was likely to attract more competent figures to the organization and lead to more creative decisions that would ultimately improve business performance.

The tendency to connect gender equality to business performance was stronger among incumbent board members, indicating that decision-makers were more conscious of the mid- and long-term negative impact of the industry’s current gender bias.

For South Korea’s public financial institutions, the target is clear, but challenging -- to ensure that 20 percent of their executives are women by 2022, as the Moon Jae-in administration has repeatedly vowed.

According to data compiled in October by Rep. Bae Jin-gyo, lawmaker of the progressive minority Justice Party and member of the parliamentary National Policy Committee, female employees accounted for 39.5 percent of the total staff in the nine financial institutions affiliated with the regulator Financial Services Commission as of the end of last year. These female workers’ pay averaged 71.3 percent of that of their male colleagues.

While the overall number seemed to approach gender parity, female executives were notable by their absence in most of the institutions, with only two female board members, both at Kamco.

Of the nine institutions, Korea Deposit Insurance Corp. was the one with the fewest female members, with only 526 out of 2,364, or 22.3 percent. The fund also marked the largest cap in consecutive service years between genders, as female employees worked 7.9 years less than their male colleagues.

Also, state-run lender IBK was noted for its deterioration in gender equality, as its female executive ratio had peaked at 33 percent during the 2013-2015 period -- when Kwon Seon-joo was the bank’s first-ever female president -- but dipped to none in 2016 and has remained that way to this day.

In an attempt to addressing the issue, Prime Minister Chung Sye-kyun in February this year announced a gender balance policy road map, obligating public institutions and corporations -- including financial ones -- with 300 or more employees to submit a gender equality report to the Ministry of Employment and Labor on a regular basis.

But the lack of progress -- even backsliding -- comes in stark contrast to elsewhere in the world, where women have been occupying some of the top spots in public finance.

And in the US, Janet Yellen, former chair of the Federal Reserve, is set to join the incoming Biden administration as treasury secretary.

Foreign institutions are also ahead of Korea in the private sector.

After Jane Fraser was made Citigroup’s first-ever female chief executive officer in September, the New York-based banking group was noted for naming a female representative in its South Korean subsidiary, picking Yoo Myung-soon as CEO of Citibank Korea in October.

But Yoo’s rise is a divergence from the overall picture in Korea.

Corporate researcher CEO Score‘s survey of 53 listed financial institutions, conducted exclusively for The Korea Herald, found 65 out of 1,576 senior executives ---- just 4.1 percent -- were women as of March this year. That is up from 3.2 percent a year earlier but still below the average of all listed companies in Korea, which is 4.5 percent.

The scarce female presence in the financial industry’s upper echelons marked a clear contrast with the generally increasing number of female employees, which reached 46.4 percent during the same period.

Among the surveyed companies, those in the capital leasing market boasted the largest percentage of female executives, accounting for 11.1 percent of the total workforce. Credit card operators came next with 10 percent, followed by leasing service providers and comprehensive financial institutions, with 9.1 percent and 7.7 percent, respectively.

The banking industry, in contrast, continued to see a heavily male-dominated executive composition.

The proportion of female executives at the country’s four major commercial banks -- Shinhan, KB Kookmin, Hana, Woori -- came to a mere 7 percent, or 8 out of 114, as of the end of June.

Among major commercial banks operating here, the two foreign lenders -- Standard Chartered Korea and Citibank Korea -- took the lead in their female executive ratios, with a combine 12 out of 45.

The problem is that changes in the executive gender formation are likely to be slow as rectifying actions have mostly been attempted at the entry level.
In its sustainable management report published in August this year, Woori Financial Group said that it added 488 female employees to its staff last year, up from 453 a year earlier. The number of newly employed men, on the other hand, contracted slightly to 332 from 369 during the same period.

The nation’s other banking groups -- Shinhan Financial Group, KB Financial Group, Hana Financial Group -- also said that they saw a visible rise in the number of female hires over recent years. In the case of Shinhan, women have been accounting for a majority of rookie staff total since 2018.

Female applicants have been helped by efforts to address a sweeping series of hiring irregularities in 2018-2019, in which top-tier banks turned out to have rigged the results of their entrance examinations in favor of high-profile figures’ children and male applicants.

“But whether these newly introduced female workers policies may continue within the organization is an entirely different issue.”

Having more women for leadership roles could contribute in promoting transparency, flexibility and openness, experts say.

“The appointment of female executives or chief officers is a significant index of a given company’s openness and diversity, and eventually its extensibility,” said Park Ju-gun, co-chief executive of CEO Score.

“The fact that few of the numerous female employees make it to the top tier in the financial industry says a lot about the rigidity of the market.”

Addressing Citibank Korea’s appointment of a first-ever female chief, however, Park suggested that the US-based bank subsidiary’s move is unlikely to directly affect the rest of the industry.

“As inspiring as it is that Citibank Korea welcomed its first-ever female chief, other commercial banks here are not likely to directly take impact for a while, as there are few plausible female executives ready to rise to power within the next few years,” said Park.

Also, Korea’s financial companies may have adjusted their hiring policies to keep with the times but still retain their conservative corporate cultures, said Sung Tae-yoon, economics professor at Yonsei University.

“While the expanded volume of female employment (in the financial sector) should be noted, we should also keep watch on the mainstream stance which is very much male-dominated,” he said.

“Regardless of how many women join the business at the entry level, the core is whether they may climb the corporate ladder and reach the decision-making stage.”