Korea reported 145 new coronavirus cases – 117 locally transmitted and 28 imported from overseas -- in the 24 hours ending Thursday at midnight, according to the Korea Disease Control and Prevention Agency.

“We will maintain the Level 1 social distancing rules nationwide under the new social distancing system. But in regions with many COVID-19 cases linked to clusters of infections, municipalities can adjust the social distancing level after consulting the central disease control headquarters,” said Sohn Young-are, a senior official from the Central Disease Control Headquarters.

Exceptions are Cheonan and Asan in South Chungcheong Province that raised the level of social distancing to Level 1.5 on Thursday due to a recent flare-up in virus cases linked to a call center.

The decision came as the average number of new coronavirus cases for the past week stood at 92.1, he said.

The system was introduced last Sunday to make the country’s virus response more effective and sustainable by breaking away from a nationally unified approach and tailoring anti-virus measures to circumstances of each region. 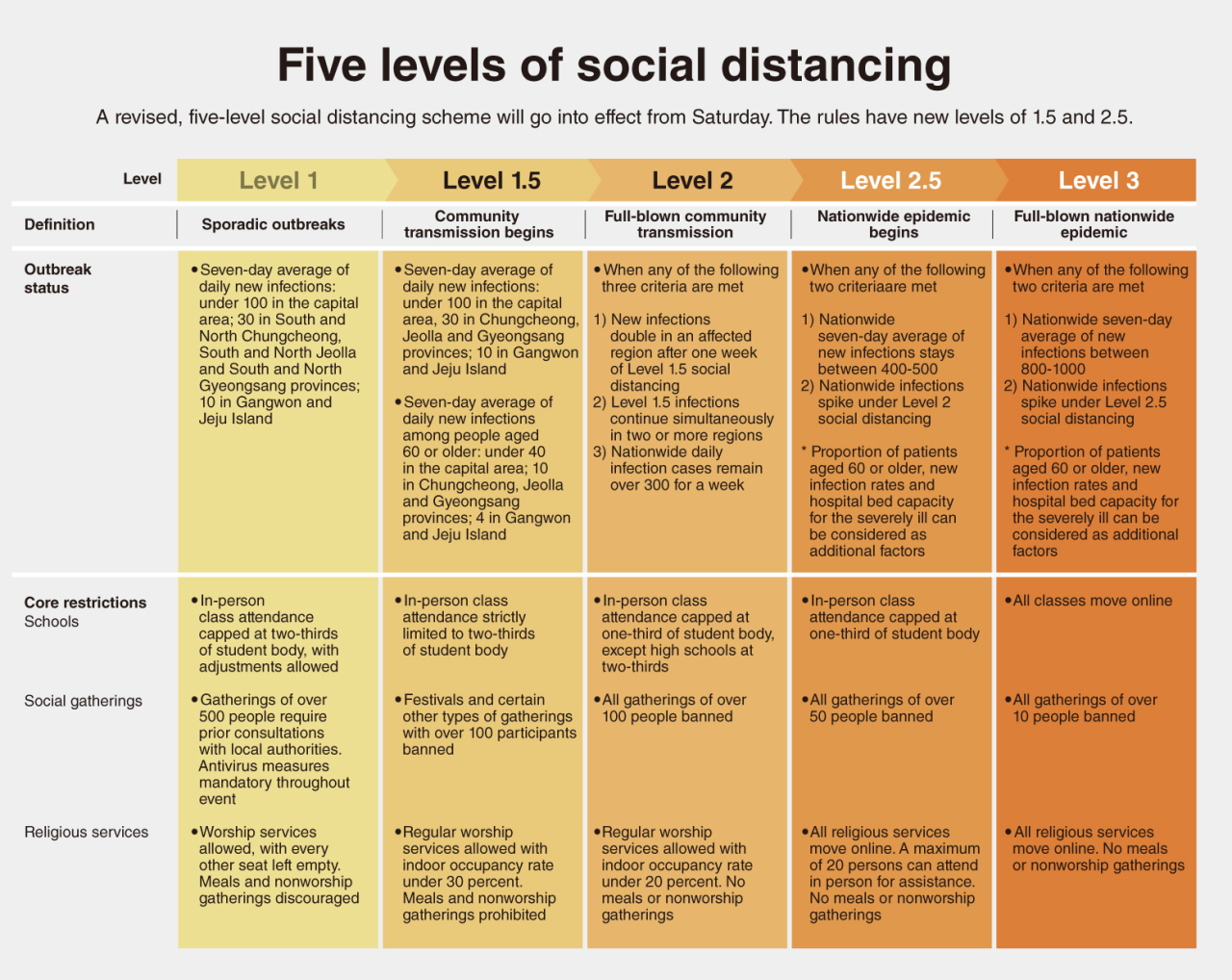 The new social distancing system breaks the current three levels into five -- 1, 1.5, 2, 2.5 and 3 -- based on several key indicators including the seven-day average number of infections, and divides the country into seven zones.

Municipalities in each region are allowed to decide on the level of social distancing depending on the scale of the virus transmission without being tied to the central government’s decision.

The lowest level is imposed when the daily case count remains below 100 for a week for the Seoul metropolitan area and 30 for other regions. Exceeding the bar, the levels are elevated to the Level 1.5 or further.

Under the loosest Level 1 social distancing rules, there are nearly no restrictions on size of social gatherings, business operations and school openings, though mask-wearing indoors and outdoors are mandatory.

Korea saw three-digit gains in new daily COVID-19 cases for the third consecutive day Friday due to clusters of infections that are not limited to high-risk facilities. New cases are being traced to workplaces, social gatherings, public sauna and indoor sports facilities.

A transmission route for 12.3 percent of the cases reported for the past two weeks remained unknown as of Friday, according to the KDCA.

Of Friday’s locally transmitted cases, the majority were in Greater Seoul -- 38 in Seoul and 34 in Gyeonggi Province, which surrounds the capital. Twenty-five cases were reported in South Chungcheong Province, 13 cases in South Gyeongsang Province and seven in Gangwon Province.

Korea reported 28 imported cases. Among them, 17 were identified while the individuals were under mandatory self-quarantine in Korea, with the other 11 detected during the screening process at the border. Twelve cases were from the US, nine from elsewhere in Asia, four from Europe, two from Australia and one from Tunisia. Twenty-three of those cases involved foreign nationals.

The number of COVID-19 patients in serious or critical condition here was 50.

One more person has died from the virus, bringing the death toll to 476. The overall fatality rate is now 1.75 percent.

So far, of the 27,195 people confirmed to have contracted the new coronavirus here, 24,821 have been released from quarantine upon making a full recovery, up 86 from a day earlier. Some 1,898 people are receiving medical treatment under quarantine.

The country carried out 12,608 tests in the past day. A total of 25,629 people were awaiting results as of Monday.