S. Korea braces for typhoon Bavi, feared to be strongest in years

According to the Korea Meteorological Administration, the eighth typhoon of the year that formed off the east coast of Taiwan last week was around the northwestern coast of Okinawa, Japan, as of 4 p.m. Monday, advancing at a speed of 12 kilometers per hour toward South Korea.

With a maximum wind speed of 115 kilometers per hour and an atmospheric pressure of 975 hectopascals at its center, it was categorized as a small, middle intensity typhoon.

But the KMA expects Bavi to gain strength, becoming “middle” in size and “strong” in intensity later Monday and “very strong” before it reaches the southern island of Jeju early Wednesday morning, weakening to “strong” the next day.

The typhoon’s forecast course is through the west coast of Jeju Island on Wednesday afternoon, traveling up the Yellow Sea and reaching near Seoul early Thursday. It is then expected to pass northeast of Pyongyang on Friday afternoon before dying out near Harbin, China.

There is a possibility, although deemed low, for Bavi to develop into a “super strong” typhoon, the highest classification on the KMA’s five-level scale introduced in May. 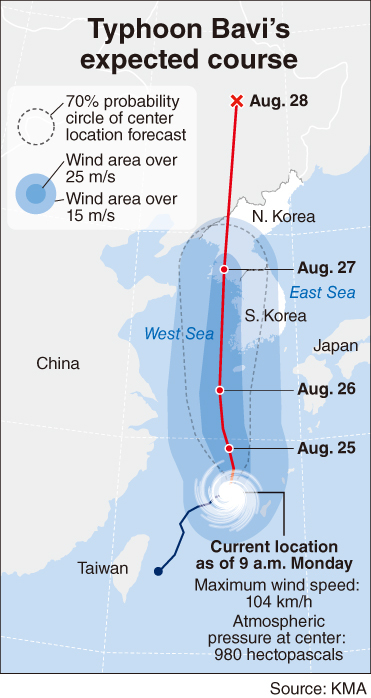 “Some uncertainties still remain for this typhoon,” said Woo Jin-kyu, a forecaster at the national weather agency during a press briefing Monday.

“There are many factors affecting the route and strength of Bavi, so we will have to keep our eye on it for the time being.”

As the entire peninsula is expected to be under Bavi’s influence until Thursday, the weather agency has advised safety guidelines before it reaches the territory.

The government on Monday started operation of a central disaster response team in preparation for Typhoon Bavi and hiked the alert level from “attention” to “caution.” District governments and agencies are conducting concentrated maintenance on potentially vulnerable facilities for the time being.