Some Shincheonji followers from Korea had visited Wuhan in January, health authorities say

Some of the sect’s members had visited Wuhan in China’s Hubei province, the epicenter of the coronavirus outbreak, in January, Kwon Jun-wook, the director of the National Institute of Health said at a briefing Sunday.

“Through a more detailed investigation, we will identify how the mass infections occurred regarding members of the Shincheonji Church,” Kwon said, adding the size of the Shincheonji followers who visited Wuhan does not seem to be big.

Of the country’s total cases, nearly 60 percent were traced to Shincheonji’s Daegu branch -- the country’s biggest cluster of infections. The government was yet to figure out how COVID-19 virus was first transmitted to the Shincheonji followers.

The country reported a total of 3,736 coronavirus cases -- including a 45-day-old baby -- and 18 deaths as of 5 p.m. Sunday, with some 87 percent concentrated in Daegu and neighboring North Gyeongsang Province, according to the Korea Centers for Disease Control and Prevention.

There were 87 cases confirmed in Seoul, 83 in Busan and 89 in Gyeonggi Province.

The latest casualty was an 83-year-old man who had preexisting conditions -- cerebral infarction, diabetes and high blood pressure -- according to the KCDC.

Of the total cases as of Sunday morning, the largest portion here -- 29.8 percent -- were in their 20s. Six in 10 were women. Thirty-five people were foreign nationals. In about 36 percent of the cases, infection routes remained unidentified, according to the center’s data.

The caseload involving Shincheonji followers is expected to further grow in the coming days, given that the 14-day incubation period had not yet expired for those who attended the last Sunday service of the Shincheonji Church’s Daegu unit on Feb. 16.

Daegu, which has a combined 2,705 confirmed cases, has been hit hardest by the coronavirus, with its hospitals facing an overcrowding crisis. Over 1,600 patients were in self-quarantine at home and waiting to be admitted to hospitals as of Sunday, according to the municipality. 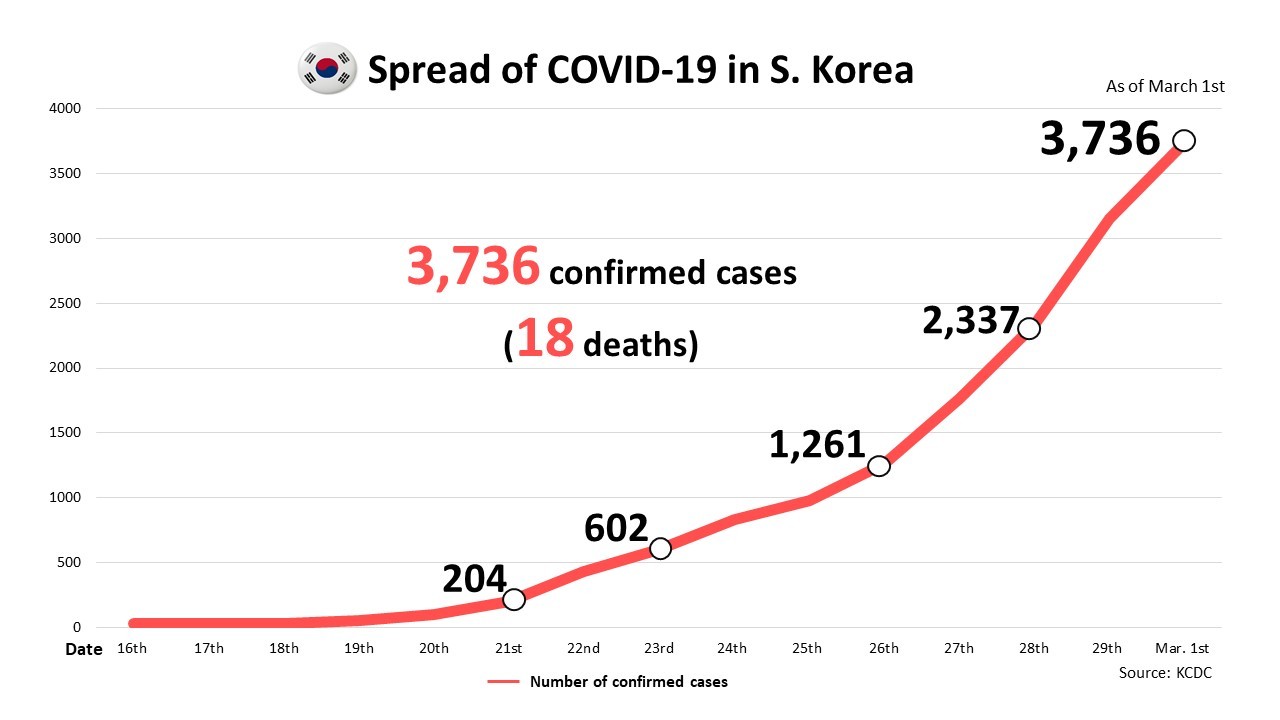 The government said at Saturday’s briefing it would prioritize limiting the number of deaths by concentrating resources on those with severe symptoms. As part of such efforts, it works to create a system under which patients are classified in four categories based on the severity of their symptoms so that those urgently in need of medical treatment can be admitted first.

The country had tested a total of 95,185 suspected cases as of Sunday afternoon, with 61,825 having testing negative. Some 33,360 people were awaiting results. A total of 30 people were released from hospitals after making full recoveries.

Some 27 people remained in critical condition as of Sunday morning, according to the KCDC.

Amid coronavirus fears, 78 countries have imposed entry bans, travel restrictions or advisories, or tightened quarantine measures on Korean nationals, with Angola and Turkey being the latest, according to the Foreign Ministry.