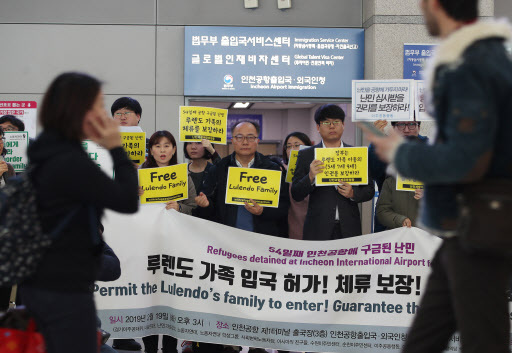 Nkuka Lulendo, his wife and four children aged under 10 arrived to South Korea on a tourist visa on Dec. 28. They have been staying at the transit zone, fighting the immigration office’s decision to refuse their entry.

Upon arrival, the family legally requested from the government for a chance to apply for refugee status here, but they were denied on the basis the Angolans had no “clear” reason to seek asylum.

“We cannot accept how the (Justice) Ministry came to conclude there is no clear reason for the Lulendos to claim asylum in Korea,” said the family’s legal representative Lee Sang-hyun from Duroo Association for Public Interest Law.

The family barely gets three meals a day due to a lack of money, and must wash in the airport’s restrooms and sleep within its confines as well, with their health not in good condition, he added.

“We are living in conditions that we have never experienced before. Our children are shivering due to winter chills they have never gone through. We are also human beings,” the family said in a letter revealed by an association of 15 human rights groups. "Please help us to get out of this life at the airport."

Lulendo, who was born in Angola and moved to the Democratic Republic of the Congo at an early age for better opportunities, fears persecution in Angola from the government for having left the country for Congo, according to lawyer Lee.

Their stay at the airport is expected to be prolonged as the family filed a lawsuit against the Justice Ministry earlier this month to invalidate the immigration office’s decision. The first hearing will take place March 7, with the ruling expected in May or June.

Under the Refugee Act that came into effect in 2013, all asylum seekers are allowed to apply for refugee status at the port of entry. The immigration office has up to seven days to decide whether to allow them into the country for the process.

Asylum seekers who are denied entry must return to their home countries or fight the government’s decision while living at the airport -- be it in the deportation room or transit zone.

According to the Justice Ministry, 756, or more than half of the 1,428 asylum seekers who applied for refugee status at the port of entry in Korea, had their application rejected between July 2013 and December 2018.

The ministry has underscored the need to prescreen refugee applicants at the airport to distinguish “genuine” refugees from economic migrants seeking to abuse the system and earn money on a work permit issued for asylum seekers.

It will take due action regarding the Lulendo family once the court makes its ruling in the coming months, the ministry added.