Economists worry that the Moon administration’s eagerness to increase fiscal expenditure as a panacea for curing economic problems, which have been partly exacerbated by its policies, will hurt the country’s long-term fiscal soundness.

Since taking office in May last year, Moon has pushed for income-led growth by expanding government spending to help create more jobs and increase welfare benefits.

An 11 trillion-won ($9.83 billion) supplementary budget was drawn up shortly after his inauguration to fund expanded employment and welfare programs. This year, another extra budget worth 3.8 trillion won was implemented especially to offer more job opportunities to young people.

In addition, the government has set aside about 3 trillion won to help cushion the impact on employers of this year’s sharp increase in the minimum wage. 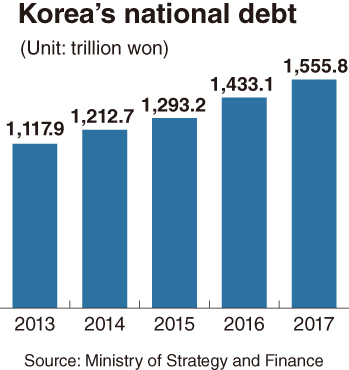 Despite such expanded fiscal spending, official data showed the average monthly income earned by the lowest 20 percent of households declined 8 percent from a year earlier to 1.28 million won in the first quarter of this year. It marked the steepest decrease since 2003 when relevant data began to be compiled.

“It might have been better just to dole out cash to low-income households,” said an analyst at a private research institute, asking not to be named.

The country’s jobless rate stood at 4 percent last month, up from 3.6 percent a year earlier. The figure for young people aged 15-29 rose from 9.2 percent to 10.5 percent over the cited period.

The overall and youth jobless rates last month marked the highest for May since 2000.

The on-year increase in the number of newly employed people remained at 72,000 in May, the lowest since January 2010 when job offerings decreased by 10,000 from the year before in the aftermath of the global financial crisis.

The analyst described the results of the increased fiscal spending over the past year as a “severe policy failure rarely seen in Korea’s modern economic history.”

But the Moon administration remains reluctant to join global competition to forge better business conditions through regulatory and labor reforms to let private companies take the lead in bolstering employment and economic growth.

The presidential office has said Moon’s reshuffle of senior economic aides Tuesday was not meant to abandon the income-led growth policy but achieve its intended outcome more quickly.

Buoyed by the ruling party’s overwhelming victory in the June 13 local elections, the Moon administration seems poised to further expand fiscal expenditure to reverse the worsening of unemployment and low-income families’ livelihoods.

The government is planning to put forward a package of measures tailored to provide more job opportunities to low-income people and strengthen financial support for them next month.

There has been growing speculation that it may go further to draw up a second supplementary budget this year as far more taxes have been collected than planned. According to the Ministry of Strategy and Finance, excess tax revenue amounted to 14 trillion won in the first four months of the year.

In a meeting with government policymakers last week, senior members of the ruling Democratic Party of Korea called for fiscal expansion “beyond imagination.”

Their request was interpreted by economic commentators as suggesting that next year’s budget should grow at a steeper pace than this year’s increase rate of 7.1 percent. This means government spending could exceed 460 trillion won in 2019, an increase of more than 30 trillion won from 2018.

Earlier this month, government ministries and other state agencies asked budget planners to set aside a combined 458.1 trillion won to cover their spending plans for next year.

The steep fiscal expansion being pushed by the Moon administration and the ruling party disregards the mid-term fiscal management plan fixed last August, which set the budget increase rate at 7.1 percent for 2018, 5.7 percent for 2019 and less than 5.5 percent for the following two years.

Experts worry that the upward adjustment of the planned fiscal expenditure, which is set to be far above the country’s potential growth rate of about 3 percent, could undermine its fiscal health.

The Organization for Economic Cooperation and Development warned in a recent report that the Moon administration’s measures to create more public-sector jobs and expand welfare programs could result in raising Korea’s national debt-to-GDP ratio, which remained at 38.6 percent in 2017, to 196 percent by 2060.

Experts note the steep fiscal expansion would have to be backed by a wider range of tax hikes beyond imposing more levies on the rich and large corporations.

“It would be difficult to keep up with the envisioned fiscal spending increase without universal tax hikes,” said Sung Tae-yoon, a professor of economics at Yonsei University.

Any tax increases should also be preceded by efforts to reduce the inefficiency of fiscal expenditure that stems from government agencies’ failure to coordinate and streamline their programs, experts say.