With a smile on his face, Kim shook hands with South Korean President Moon after stepping out of Panmungak, a North Korean building that houses its liaison office to arrive in front of the military demarcation line. He crossed the border after shaking hands and exchanging a brief greeting with Moon. But instead of heading straight to their next destination, Kim grabbed Moon’s hand in a friendly manner and gently pulled him to the North Korean side of the border.

A group of South Korean press who were temporarily allowed to enter the North Korean side of the border to cover the historical encounter, took pictures of the two as they turned around towards them.


Both leaders then re-entered South Korean soil. Two South Korean children handed a bouquet of flowers to Kim when the two leaders casually strolled out of the strip of land between T2 and T3, blue one-story buildings administered by the UN Command known as conference row, which lies atop the MDL.

The children are students of an elementary school situated in the South’s border town of Daeseong-dong, which is the only South Korean village within the Joint Security Area.

The North Korean leader handed the flowers to his sister Kim Yo-jong, who was tapped to accompany her brother to the South as a member of the summit delegation.


Moon and Kim then walked on the red carpet with South Korean honor guards, greeting Kim in a traditional manner. 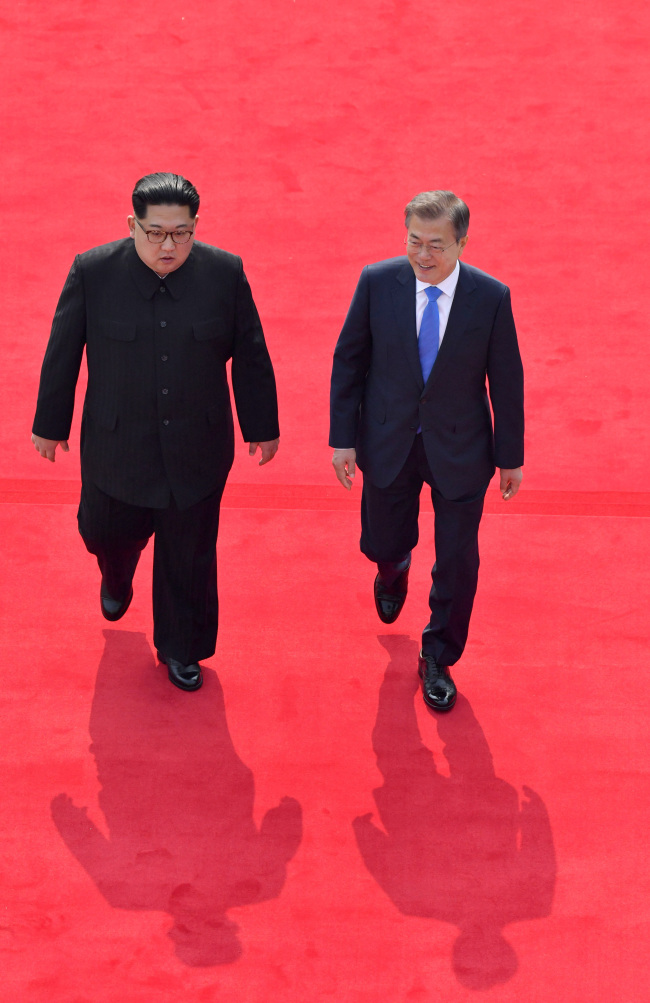 Both leaders then moved towards the Peace House side by side, but in an unexpected manner, Kim Yo-jong and Kim Yong-chol, a vice chairman of the ruling Workers‘ Party of Korea’s central committee in charge of inter-Korean affairs, followed the two leaders from behind. The two members of the North Korean delegation were quickly pulled to the side by an attendant.

The incident drew a row of laughter from the main press center located at the Korea International Exhibition Center, known as KINTEX, in Ilsan.

The leaders then entered the Peace House to kick-off the third inter-Korean summit.

Official talks between Moon and Kim were set to start at 10:30 a.m.