Front-runner Moon Jae-in says he “does not like” homosexuality

While homosexuality is not a crime in South Korea, LGBT people -- lesbian, gay, bisexual and transgender -- live largely on the fringes of society as the majority of Koreans remain either indifferent to or intolerant of homosexuality.

Knowing this, most candidates, except two, have shied away from touching on LGBT-related issues. The two exceptions are Sim Sang-jeung, the only female and progressive candidate to include LGBT rights in her candidate manifesto, and Hong Joon-pyo, the conservative firebrand with a record of sexist and homophobic remarks. 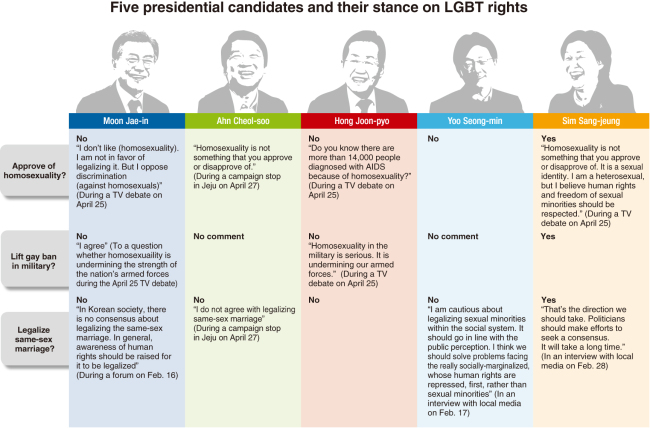 During a televised debate Tuesday, front-runner Moon Jae-in of the Democratic Party of Korea was directly confronted by Hong to make clear his stance on homosexuality.

“I do not like it” was the answer from the former human rights lawyer who is, according to latest polls, most likely to lead South Korea for the next five years.

For years, rights advocates here have campaigned for a ground-breaking new law that would ban discrimination on such grounds as gender, sexual orientation, disability, age, race, marital status and religion. It is also one of the key recommendations made by the UN Human Rights Council to the South Korean government.

But efforts to enact the anti-discrimination law all fell through in the face of strong opposition from Protestant groups which argue the move would give ground to homosexuality and lead to social chaos.

When asked by The Korea Herald, two leading presidential hopefuls -- Moon of the left-leaning Democratic Party of Korea and Ahn Cheol-soo of the centrist People’s Party -- did not state clear positions on the issue.

Saying in unison that a “social consensus” is needed first, the two camps only referred to the principle that human rights should be protected for all and no one should be discriminated.

In a TV debate Tuesday, Moon said he is not in favor of “legalizing homosexuality,” while stating that he opposes discrimination against homosexuals.

At a forum in February, the candidate revealed his unwillingness to push for the law. Saying a similar law already exists, the candidate said he does not want to “cause unnecessary controversy” by trying to enact an additional law.

During his previous presidential run in 2012, Moon promised to push for the bill. The late liberal President Roh Moo-hyun supported its enactment. Moon was Roh’s chief of staff before joining politics.

The existing law that Moon referred to is the one that governs the National Human Rights Commission of Korea. The commission receives complaints and imposes recommendations when discrimination takes place, but has no legally binding force.

While Ahn has made no public comment to clarify his stance on the issue, his camp said, “There are different opinions in society. (Enacting the bill) should go through public discourse and consensus.”
Right-wing candidates oppose the act.

Hong, the outspoken candidate of the far-right Liberty Korea Party, is the most vocal about his objection to the issue.

“I don’t like (homosexuality). I don’t do that. Having surgery to change one’s gender is a separate matter, but homosexuality is not my thing,” Hong said in a radio interview with local cable channel YTN.

Minor conservative candidate Yoo Seong-min of the Bareun Party refused to comment on the matter. But his ranking campaigner told Protestant groups on April 20 that the party will oppose the legislation of the anti-discrimination act.

The only contender who supports the bill is Sim of the Justice Party. She is also the only who included the LBGT rights issues in her candidate manifesto.


Abolishment of gay ban in military

Recently, a video clip of two male soldiers having sex reignited an old controversy over homosexuality in the military.

The military launched an investigation, which a local gay rights group claimed was a clampdown on gay servicemen. One was arrested on charges of violating Article 92-6 of the Military Criminal Act, while up to 50 soldiers are under investigation, said the Center for Military Human Rights Korea.

Although homosexuality is not banned in the country, sexual activities by homosexuals in the armed forces is prohibited under the Military Criminal Act. Those found guilty can be sentenced to up to two years in jail.
When asked by the Korea Herald, three of the five mainstream party-backed candidates -- Moon, Ahn and Yoo -- declined to comment on the gay ban.

Moon, during Tuesday’s debate session, hinted at his support for it. Asked by Hong whether homosexuality is detrimental to the strength of armed forces, he said, “I agree.”

Hong said, “Homosexuality in the military is serious. It undermines the strength of our armed forces.”

Sim of the Justice Party is the only one who sympathizes with gay servicemen, who under the country’s conscript system must serve for about two years with the constant fear of being prosecuted.

Korea does not recognize same-sex marriage and the four candidates who showed little interest in LGBT issues appear to think, “Why change it?”

For Hong, it is simply just unthinkable, while Yoo says there are more important rights issues than legally recognizing gay couples.

“I think we should solve problems facing the really socially-marginalized, whose human rights are repressed, first, rather than sexual minorities,” he said in an interview with local media.

The liberal front-runner Moon made it clear that he is against the legalization of same-sex marriage, while centrist Ahn, again, did not officially lay out his stance.

Sim is again the only presidential hopeful in favor of same-sex marriage.

Major presidential contenders are reluctant to speak out, or even backtrack on their previous positions about rights for sexual minorities, when they stand a real chance to take the nation’s top office, a political analyst said.

“Major candidates with a higher chance of winning tend to shun sensitive issues and adopt a defensive approach in their policies so as not to lose votes,” said Bae Jong-chan, the chief director of political pollster Research and Research.

“Also, the current election debate is too focused on national security and negative campaigning.”

In the face of major presidential candidates failing to offer hope for a better future for sexual minorities, a LGBT campaigner raised questions over their willingness to tackle inequality and reform the country.

“Waiting for a social consensus to be reached is just an excuse. They should speak out and lead the discussion. That’s their job as a politician.”