Most of them are the offspring of the late SK Group founder Choi Jong-kun and relatives of current Chairman Chey Tae-won. 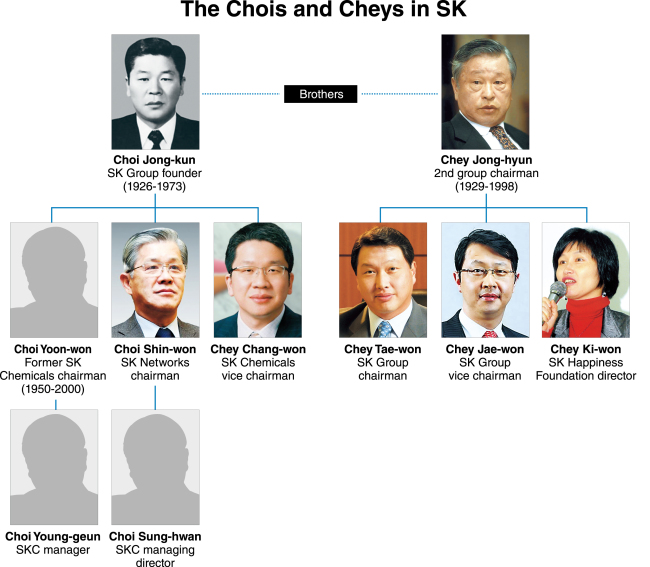 Choi and Chey are the same Korean surname written differently in English, a deviation that stems from Choi’s US-educated brother Chey Jong-hyun choosing to spell his family name differently. Jong-hyun later inherited the group and became the second SK chairman.

The oldest of the SK kin participating in business management is SK Networks Chairman Choi Sin-won, 64, the second of the late patriarch’s three sons, who returned to SK Networks this March after serving as chairman at polyester film producer SKC since 2000.

“The founder’s two living sons are running old businesses that date back to their father’s era, seemingly independent of the influence of the group Chairman Chey Tae-won,” said Chung Sun-sup, head of chaebul.com, an online corporate research firm.

SK Group’s roots can be traced to a textile-maker which the founder took over just after the end of the Korean War in 1953. By the 1970s, SK had grown into a major chemical and fiber business group.

But, it was under the second Chairman Chey Jong-hyun that SK made the leap to become the oil-to-telecom giant that it is today, as he acquired what later became the group’s two main cash cows -- SK Innovation and SK Telecom.

These days, there seems to be a line drawn in terms of the areas controlled by the offspring of the firm’s first and second generation chiefs: the founder’s sons carry on their father’s legacy -- namely SK Chemicals, SKC and SK Networks, while the second chairman’s sons run businesses their father built.

Chey Tae-won, SK Group’s chief and the first son of the second chairman, exerts influence over the group’s core businesses of petrochemicals and telecom, as well as a score of other new businesses.

He is the single largest shareholder of SK Holdings, which sits at the top of the corporate governance structure that binds the group’s nearly 90 affiliates and subsidiaries. The chairman’s younger brother Chey Tae-won holds the title of SK Holdings vice chairman.

Over at SKC, SK Networks Chairman Choi Sin-won’s son, Choi Sung-hwan, 35, works as an executive director and 29-year-old nephew Choi Young-geun as a middle manager. The youngest of the family members participating in management, Choi Young-geun is the first child of the late Choi Yoon-won, the founder’s first son.

Unlike Samsung, Hyundai Motor and some family-run conglomerates in Korea, hereditary succession is not a pressing issue at SK. Rather, market watchers pay more attention to the cousins of SK Group Chairman Chey Tae-won for the possibility of a split, although few actually foresee such a move in the near future.

Fueling such speculation are the purchases of SK Chemicals shares by its Vice Chairman Chey Chang-won over the past few years. He is now the company’s No. 1 stakeholder with 17 percent of shares, while the group’s chairman has just 0.05 percent and SK Holdings has none.

Chey Tae-won has two daughters and a son, aged between 20 and 26, from his marriage with former President Roh Tae-woo’s daughter. None of them hold a meaningful number of SK shares or work at SK companies.