In front of SK Group Chairman Chey Tae-won and his fellow CEOs, they have to make a presentation next month on ways to fundamentally challenge the way they make money, work and use assets.

The task is an assignment given by Chairman Chey after his TED-style lecture-cum-speech in July on the changing business environment and SK’s future.

“Companies that do not change in a changing environment don’t just risk perishing slowly. They risk sudden death,” he told top executives.

According to his assessment, SK, a 164 trillion won ($148 billion) business group spanning petrochemicals and telecommunications, is already in “serious condition.”

Many of its companies have low returns on equity and stocks are trading at less than their book value.

“The corporate world is often likened to a battlefield, but if this was a real war, (SK) is in no fighting shape,” he said. 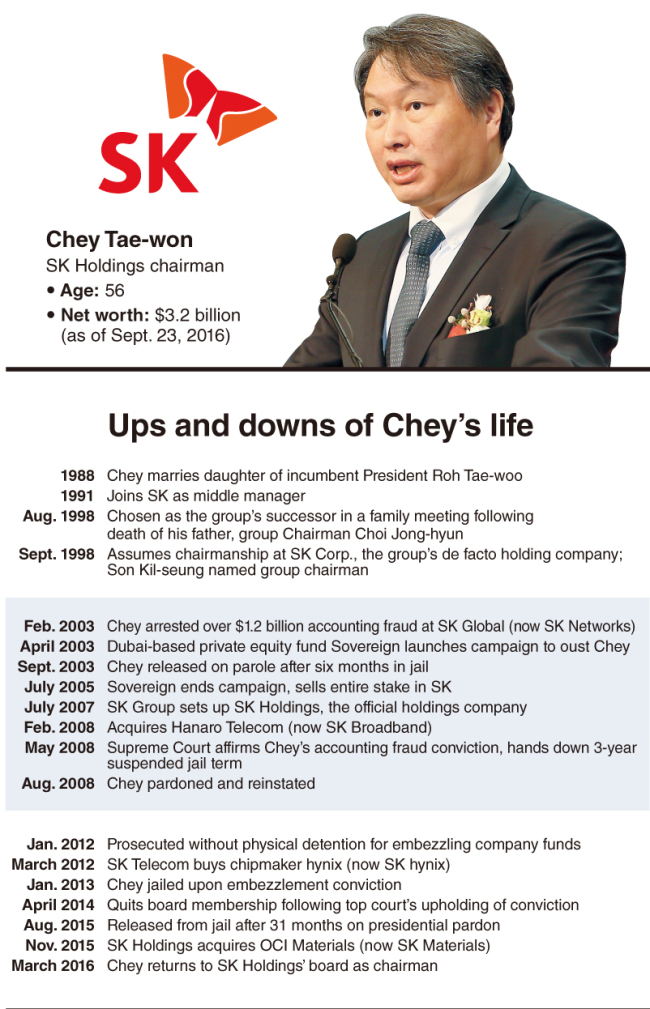 Despite its weighty local presence, SK lags significantly behind its chaebol peers Samsung, Hyundai and LG in global brand recognition. Some foreigners still mistake it as an acronym for South Korea.

This is partly because many of SK’s businesses are not consumer-facing, but a key reason is that SK has historically been and continues to be a domestic market-focused group.

“SK Group, when Chey took over, already had a very solid business portfolio centering on SK Innovation and SK Telecom, (which were both the market leaders in their respective fields of oil refinery and telecommunications),” said Chung Sun-sup, the head of chaebul.com, a corporate research firm.

“Not many of those efforts, however, were successful,” Chung said.

The group now derives more than 50 percent of its sales in overseas markets, up significantly from 23 percent at the end of 1997, a year before Chey became group chairman. During the 18-year reign of Chey, SK itself has grown more than five times in assets.

The boost in SK’s global business profile, however, is mainly thanks to its acquisition of a local company, the country’s second-largest chipmaker hynix, in 2012.

SK hynix, which raked in 5.3 trillion won in operating profits in 2015, now forms one of the three pillars of the group’s portfolio, along with SK Innovation and SK Telecom.

For SK Innovation and SK Telecom, identifying new markets where they can grow -- besides near-saturated Korea -- still remains a pressing issue, experts say.

It is not a coincidence that Chey’s talk about the group’s future was followed by a revived push for his “China Insider” initiative, which was first unveiled in 2006.

“If China stumbles, Korea falls. If Korea falls, China benefits,” Chey has famously said, explaining why SK needs to not just export goods to the country, but also build a significant local presence there.

Chey has stayed for the last couple of days in China, meeting high-ranking officials and influential businesspeople, including Sun Zhengcai, secretary-general of the southwestern city of Chongqing. It was his second visit to the country this month.

On Monday, the group’s top decision committee on global business strategy, comprised of CEOs of core SK units, was to hold its first overseas meeting in Shanghai.

Chongqing is where SK and China’s Sinopec have jointly established the petrochemicals plant Wuhan Naphtha Cracking Center and where SK hynix has a chip manufacturing plant.

The group is also eying the Middle East.

SK Telecom, the group’s telecommunications unit and the nation’s No. 1 mobile carrier, has formed a partnership with the state-run Saudi Telecom Co. to jointly pursue new business opportunities in the areas of smart city planning, smart health care systems and “Internet of Things” in the region.

Mergers and acquisitions have traditionally been part of the group’s expansion strategy.

“SK has a tradition of growing through big deals. Both SK Innovation and SK Telecom are acquired assets,” said Park.

In one of the most recent mergers, SK acquired a 49.1 percent stake in OCI Materials -- the world’s leading supplier of nitrogen trifluoride -- for 482 billion won in November 2015 to strengthen its semiconductor business. The same month, it also purchased a 20 percent stake in Socar, Korea’s largest car-sharing company, for 59 billion won.

The Korea Herald and The Investor are jointly publishing a series of in-depth articles analyzing rising business tycoons and their companies' governance structure. This is the first installment on SK Group. -- Ed.