In a report, the Korea Economic Research Institute claimed excessive or unnecessary regulations here created a major hurdle to local developers of self-driving cars, partly by adding to their costs. 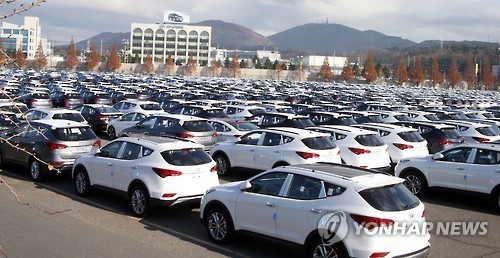 The report came amid government efforts to help develop and commercialize level 3 self-driving cars by 2020. A level 3 self-driving car refers to an autonomous car that can fully assume control of all safety-critical functions in certain conditions, while it automatically senses conditions that require the driver to retake control and provides a "sufficiently comfortable transition time" for the driver to do so.

To this end, the transportation ministry announced plans to build a new test site for self-driving cars, known as K-city.

Such efforts by the government come as most global automakers and IT firms are racing to become the first to develop a self-driving car, considered one of the largest future engines of growth.

The automaker and others developers here, however, may have to take vehicles to as far as Arizona in the United States to test them, the report noted.

This is because the Seoul government currently requires at least two safety drivers to be inside a car even when testing a driverless vehicle.

Arizona, on the other hand, allows testing of driverless cars on its roads, according to the report.

"Most other countries are moving to simplify requirements for test driving autonomous vehicles. Because conducting tests on actual roads is very important for the development of self-driving cars, the country must ease its requirements to allow various tests and research," it said.

The report also noted a need to turn the country into a regional test bed for autonomous vehicles.

"The test site set to be built in the country does not fall far back behind those of other countries in terms of its size and infrastructure, but related regulations are again becoming a major obstacle in the construction," it said.

The research institute is a private think tank run by the Federation of Korean Industries, the largest business lobby in South Korea that represents about 600 top businesses here. (Yonhap)