With its chairman Lee Kun-hee ill and bedridden for the past two years, succession looms large at the colossal corporate empire, which alone accounts for roughly a fifth of the nation’s economy.

The market knows who the successor is -- Lee’s only son Jae-yong -- but has little clue as to what steps the group will take to pass on control to him.

To be sure, Lee Jae-yong, Samsung Electronics vice chairman, has been the group’s acting chief, filling in for his father ever since he suffered a nearly fatal heart attack in May 2014.

It is a widely known secret that the 48-year-old is behind the group’s recent bold restructuring moves that entailed high-profile splits, mergers and asset sales.

“What still needs to be done is the transfer of equity ownership to Lee Jae-yong.”

A typical corporate succession drama in the West would entail a battle for the throne among potential successors or the endeavors of the chosen successor to prove his or her mettle.

Yet in Korea’s convoluted world of chaebol, many take Samsung’s heir for granted, despite his apparent lack of management experience to be considered fit for running the 350 trillion-won ($308 billion) empire.

Their attention is more fixed on the detailed course of this hereditary succession as to how the young heir -- who currently holds extremely small direct equity stakes in core units -- will increase his control.

Like many other chaebol groups, Samsung Group binds its 59 companies in a complex network of strategically placed stakes in affiliates, including the highly controversial intragroup circular shareholdings.

At the peak lies the group’s de facto holding firm Samsung Construction and Trading, which is 31.4 percent owned by the Lee family, including Lee Jae-yong’s personal holding of 17 percent.

Samsung C&T’s most important asset is its 4.8-percent stake in Samsung Electronics, the group’s crown jewel that produces smartphones, computer chips and flat-screen TVs and contributes to nearly 75 percent of the group’s total revenue. The de facto holding firm also owns 20 percent of Samsung Life Insurance, another key unit which sits at top of the group’s financial businesses.

“The key direction in Samsung’s future succession and restructuring moves will be for the heir to secure more control of Samsung Electronics,” said Jeong Dae-ro, an analyst at Mirae Asset Daewoo Securities.

“Due to budget constraints and a ban on new circular shareholding arrangements, he will have limited options to do that,” he added.

Shares in Samsung Electronics, trading at around 1.53 million won a piece on Tuesday, are widely dispersed, with 50.6 percent in the hands of foreign investors.

About 18 percent of the shares are held by the Lee family and affiliates, including Lee Kun-hee’s 3.44 percent, Lee Jae-yong’s 0.58 percent and Samsung C&T’s 4.8 percent. An additional 1 percent stake will cost them about 2.1 trillion won.

This is exactly why Jeong and some other stock analysts think that the junior Lee may seek to make use of the company’s 12.4 percent treasury stocks. 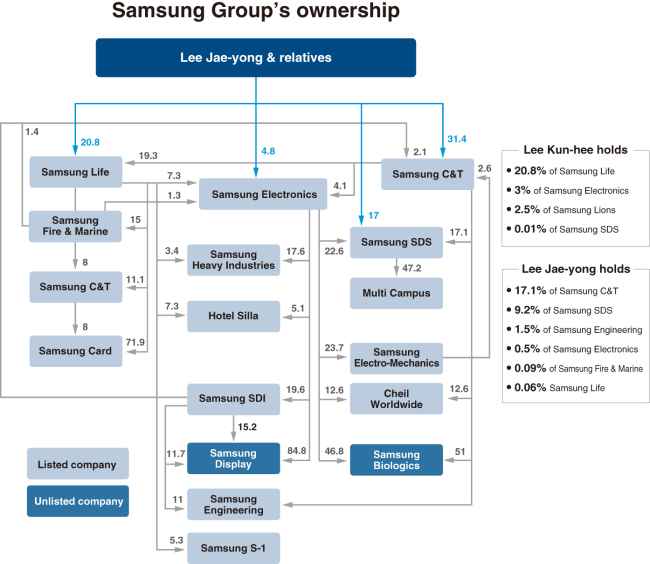 Some of the scenarios circulating in the market involve a special entity being carved out of Samsung Electronics, taking over the treasury stocks and merging with Samsung C&T or Samsung SDS in which the junior Lee has relatively large stakes.

Whatever the future may entail, it will be the endgame of a two-decade long effort at Samsung to pass on the crown to the third-generation leader, experts and observers say.

The process began in the late 1990s, when Lee Jae-yong, along with his two younger sistersLee Boo-jin and Lee Seo-hyun -- acquired large stakes in two affiliates Samsung SDS and Samsung Everland through convertible bonds sold to him by the companies at prices well below fair value.

For this sale, their father was sentenced to a suspended jail term in August 2009. He was granted a presidential pardon four months later.

The series of restructuring steps that Samsung Group has undertaken since 2013 are seen as having the dual purpose of streamlining its business portfolio and smoothing the path for the junior Lee’s eventual ascension to power.

“Expectations are high that Samsung will take the next steps in its succession planning this year or next,” said Yoon Tae-ho, an analyst at Korea Investment & Securities.

“Whatever the step may be, I think the group will pursue a soft landing, avoiding such noise and high drama that the Cheil Industries-Samsung C&T merger produced.”

To push for the merger, Samsung had to overcome a blocking campaign led by U.S. hedge fund Elliott Associates which claimed the deal would benefit the controlling family only. Samsung argued that it would create synergy for general shareholders.

A Seoul court earlier this year ruled that this merger had indeed hurt the interest of minority shareholders of Samsung C&T, in a symbolic blow to the group.

“Samsung should have learned its lesson,” Rep. Chae said.

“For Lee Jae-yong to truly win acknowledgement as Samsung’s next leader, he’d better break away from the past, given the shady way this succession began back in 1996, uphold shareholder rights and improve corporate governance,” he added.