[THE INVESTOR] Many start-ups want to be like Samsung. Ironically enough, Samsung wants to be like a start-up. And for the past few years, the nation’s largest conglomerate has been working hard to go back to basics.

Some liken it to a patient lying on an operating table: Some of its affiliates are being removed like dead tissue, while others are being stitched back together, at times after receiving several blood transfusions.

Since Samsung Group chairman Lee Kun-hee was hospitalized after a heart attack in 2014, his son Jae-yong has been working to streamline the 78-year-old business to make it more agile and efficient.

As part of the initiative, Samsung went on a selling spree, offloading its affiliates and landmark assets.

The conglomerate sold off six of its chemical business affiliates, including Samsung Total Petrochemical and Samsung General Chemicals, over the course of two years from 2014.

It tried to sell marketing business arm Cheil Worldwide, but the negotiation with the prospective buyer, French marketing company Publicis of France, ground to a halt.

While pushing hard to increase business efficiency by eliminating and merging affiliates, which were less profitable or unrelated to Samsung’s core businesses for future growth, Lee has been attempting to put more weight on new businesses that he thinks will become new revenue sources of the conglomerate.

Among the new businesses are biopharmaceuticals, the Internet of Things, and financial technology.

“It is no secret that the junior Lee pays a keen attention to the biopharmaceuticals businesses, Samsung Bioepis and Samsung BioLogics,” a Samsung insider said.

“Just before Samsung BioLogics was launched in 2011, the vice chairman called the CEO of Samsung BioLogics into his office to give him a pep talk and requested him to make the utmost efforts to grow what would become a new growth engine of the conglomerate,” the source added.

Led by the vice chairman, the conglomerate has also tried to shift its focus from hardware-oriented businesses to software-based ones, aiming to catch up with global software giants, such as Google. 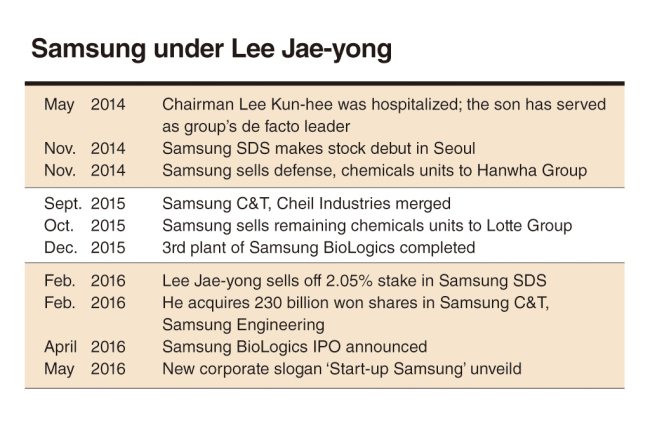 The tech firm has recently adopted education programs and evaluation tests for all software engineers. The Samsung engineers take a series of tests to assess their algorithm skills on a regular basis and those who earn lower grades receive disadvantages in their performance evaluations.

Some Samsung insiders say the recent restructuring and new policies, which are “dramatic,” are damaging employee morale.

“A series of unrealistic and dramatic changes at the conglomerate dispirit employees and negatively affect their loyalty to Samsung,” said a former chief engineer from Samsung Electronics.

At the center of Samsung Group’s transformation initiative is Samsung Electronics.

For the past few years, the conglomerate’s flagship electronics business has shown a growing appetite for start-ups, acquiring a total of nine start-ups. 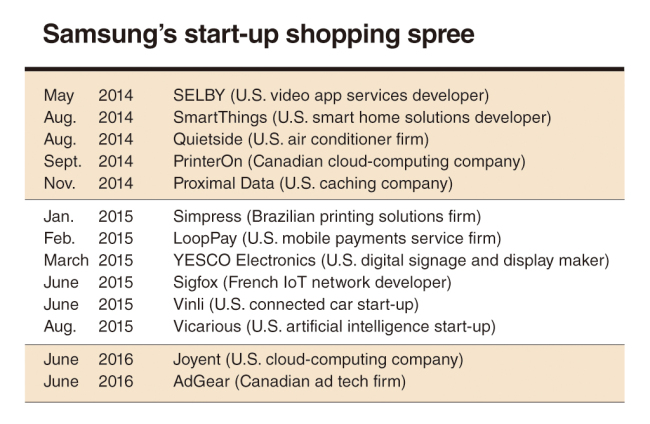 The list of the start-up takeovers include video app services developer firm SELBY in May 2014, SmartThings in August 2014, printing solution firm Simpress in January 2015, mobile payment firm LoopPay, and most recently public and private cloud firm Joyent in June.

At the same time, the electronics firm has also come up with corporate policies for eliminating unnecessary redtape, such as employee titles and overtime -- all of which Samsung believes are hurdles in achieving innovation.

Instead of being called by their titles -- associate, assistant manager, manager, senior manager, director -- the tech giant’s employees will either use an English name or put “pro,” indicating professional, or “nim,” meaning sir or madam in Korean, at the end of their names.

Samsung Electronics’ top executives, including Kim Hyun-seok of the visual display division and Jeon Dong-soo of the medical equipment division and Kim Young-ky of the network business division recently gathered together to vow to participate in the “start-up Samsung,” initiative, aimed at changing the rigid corporate culture into a new, flexible, one.

The tech giant’s attempts for change drew both hope and concern from market watchers, with many believing them to be superficial.

“Trying to bring changes to corporate culture is a positive move, but it should be conducted in a sincere and coherent manner,” said Kim Sun-il, a chief of the council for the Center for Creative Economy and Innovation, a start-up nurturing center run across the nation.

Park Joo-keun, the head of CEO Daily, a research firm, said that “there could be conflict inside the firm between the old and new. It seems we need to wait and see if the both sides can create synergy.”