The five-member delegation led by Sen. Deb Fischer visited the Namyang R&D Center of Hyundai Motor Group, the heart of the Korean auto giant’s new car design and development. Other members included Sen.Thad Cochran, Sen. John Barrasso, Rep. John J. Duncan, Jr. and Rep. Diane Black.
The visit of U.S. Congress members to Hyundai was designed to raise their understanding of Korea’s auto industry and its transport infrastructure and culture. Hyundai Motor is the only Korean company on the delegation’s itinerary, the group added.

“At a luncheon with the delegates before the site visit, the group chairman briefly mentioned about the group’s investment direction for future mobility like self-driving and green cars,’’ a group spokesperson said.

In response to chairman’s vision, Sen. John Barrasso said Hyundai’s future projects will be helpful for the company to grow into a bigger and more important player in the auto industry.
“Both parties also exchanged their views on pending issues confronting the Korean and U.S. auto industries,’’ the official added. 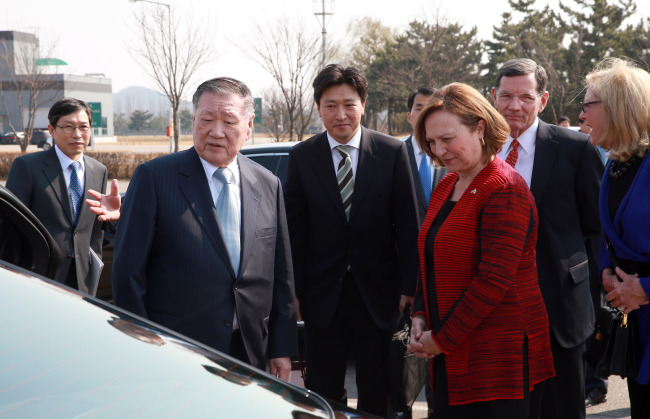 At Hyundai’s global R&D hub, located in Hwaseong, Gyeonggi Province, the delegates were offered many experience programs, including a briefing by Hyundai’s design center, a car crash test, and a test-drive of Hyundai’s Genesis EQ900 (G90 in the U.S. market) and Hyundai’s Ioniq hybrid and electric, Kia’s new K7, all of which will debut in the U.S. market in the latter part of this year or next year.

The U.S. market, in particular, is one of the most important strategic markets overseas for Hyundai’s level-up project. The Korean automaker has sought to advance into the global luxury car market since it launched its first luxury brand Genesis last December.

Hyundai will roll out G90, the first model of Genesis -- which the company debuted in the U.S. at the 2016 Detroit Auto Show in January -- in its second biggest export market in the latter part of this year.

The success of its flagship luxury sedan is critical to continue a growth momentum in the U.S. market.

In contrast to falling sales in China, the biggest overseas market of Hyundai Motor Group, sales of the world’s fifth largest automaker hit a record high of 1,388,000 million units in the U.S. last year, a 6.2 percent increase from the previous year.