By Shin Hyon-hee
Published : Jan 28, 2016 - 19:16       Updated : Jan 29, 2016 - 10:15
Speculation soared Thursday that North Korea may be counting down to a fresh test of a long-range missiles, prompting Seoul and its partners to tighten monitoring activities and warning of a surprise provocation in light of the recent fourth nuclear test.

Quoting a Japanese government official, Kyodo News reported early in the day that the liftoff could take place in the North’s northwest town of Dongchang as soon as in a week, given satellite imagery analyzed over the “past several days.” 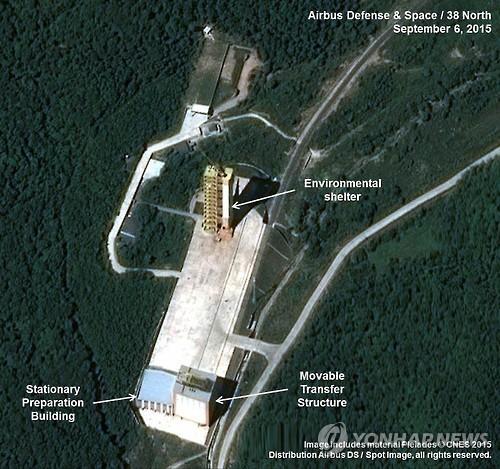 The South’s Defense Ministry declined to confirm the report, citing intelligence matters, while expressing concerns about the possibility.

“Unlike its past pattern, North Korea did not fire a long-range missile ahead of the nuclear test this time. This is raising concerns about a possible missile launch,” ministry spokesman Kim Min-seok said at a news briefing.

“As the North conducted the latest nuclear test in a hit-and-run manner without notifying China or the U.S., we assess that it could similarly stage a major provocation in the future.”

Cheong Wa Dae and the foreign and unification ministries also appeared wary about presupposing any imminent blastoff, though they warned Pyongyang against breaching international resolutions once again.

U.S. Department of Defense spokesman Cmdr. Bill Urban refused to discuss “matters of intelligence,” reiterating its urging of the regime to commit additional provocations that could escalate tension and “lead to a cycle of escalation.”

Later in the day, Beijing also called for the North to exercise restraint, displaying “deep concerns” about an aggravation of the ongoing crisis. “It should not take radical steps and avoid causing a vicious cycle of tension,” Foreign Ministry spokeswoman Hua Chunying said at a press briefing.

Japanese Prime Minister Shinzo Abe, for his part, reportedly convened a meeting of the National Security Council to assess the current situation and coordinate its response, including a strike should a North Korean missile enter its airspace. Deputy Chief Cabinet Secretary Koichi Hagiuda said at a news conference that Tokyo is gathering and analyzing related information alongside Washington and Seoul with “great interest.”

The report came amid the fierce debate among U.N. Security Council members ― the U.S. and China in particular ― on the sanctions and language to feature in its upcoming resolution over the communist state’s fourth experiment of a fission bomb on Jan. 6.

The North appears to have completed a project to extend the existing 50-meter-tall launchpad at the Sohae missile station by more than 15 meters, which has kindled concerns that it could try out a space launch vehicle larger than the already tested 30-meter Unha-3.

In September, the director of the country’s National Aerospace Development Administration said its development of a new earth observation satellite for weather forecasting was “at a final phase” in an interview with the state-run Korean Central News Agency.

Yet the timing suggested by the Kyodo report defied the prevalent anticipation that the North would push ahead with another provocation, such as a test of an intercontinental ballistic missile after the UNSC resolution, in time for the ruling Workers’ Party’s first congress in 36 years slated for May, or the April 15 anniversary of the birth of Kim Il-sung, its founding father and the late grandfather of leader Kim Jong-un.

In the run up to its latest successful long-range rocket liftoff in December 2012, Pyongyang informed Washington and Beijing via official or indirect diplomatic channels about a week before. It also provided the International Maritime Organization and International Civil Aviation Organization with information on the time frame of the impending launch and where the parts may fall, while conveying a “Notice to Airmen” to Japan and other neighbors.

So far the regime has yet to alert any of the multinational agencies, foreign and defense ministry officials confirmed.

Typically, it takes about three days to assemble all three phases of the rocket, and engineers would then set up the support structure, power cables and other devices before injecting oxidants and fuel over the next three to four days.

With a screen fence installed apparently to evade satellites, however, such activities may well go unnoticed, military officials noted. A satellite photo taken on Nov. 27 and released on Dec. 9 by the U.S.-Korea Institute at Johns Hopkins School of Advanced International Studies on its 38 North blog showed that a white shade had been erected beside a gantry tower.

“For now it may make more sense for the North to fire the missile after the resolution, but given the UNSC is taking more time than it did following previous nuclear tests ― I believe a draft is not yet being circulated ― it could press ahead with the missile launch early to avoid a situation where it gets caught up in another sanctions campaign, even though the party congress is just around the corner,” a senior diplomat said, asking for anonymity due to the sensitivity of the issue.