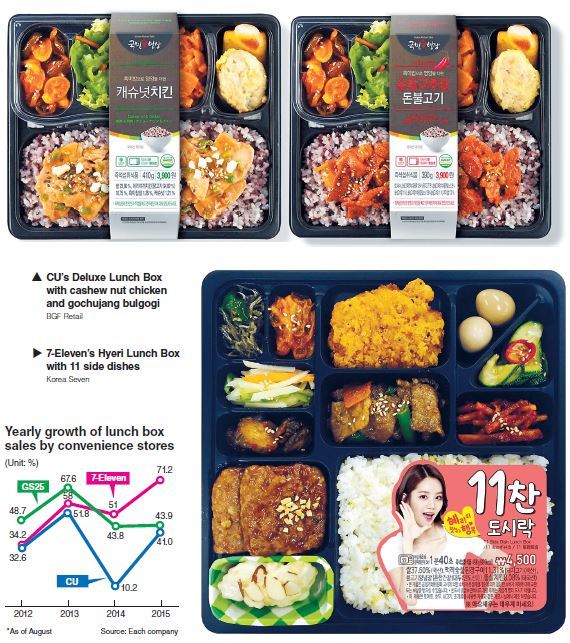 The competition for lunch box meals is getting fiercer among South Korean convenience stores as the market is growing rapidly due to the rise of the single-person household population here.

“Dosirak” -- the term for packed lunches in Korean -- at convenience stores used to be discounted as low-quality meals for quick lunches, but now retailers are offering diverse and healthy options at an affordable price, drawing keen attention from customers.

“As consumer demand for quality lunch boxes grows at a fast pace on the back of demographic changes, the market is responding by developing healthier and tastier products,” said Lee Na-ra, a 7-Eleven official.

The Korean lunch box market is valued at around 2.5 trillion won ($2.22 billion), including dosirak specialty stores.

Sales of lunch boxes at local convenience stores such as CU, GS25 and 7-Eleven increased an average of over 50 percent this year from a year earlier, according to the companies.

Single-person households, which is becoming a dominant feature of Korean society in a demographic shift, is the main force bringing the market expansion. Over 26 percent of the country’s population lives in one-person households, and the proportion is expected to grow to 34.3 percent by 2035, according to government data.

“When I don’t feel like cooking a meal for myself, I drop by a convenience store to buy a dosirak on the way home from work. It saves time and food waste. And I see more product varieties that look like a proper meal,” said Oh Min-Joo, a 39-year-old office worker.

According to industry insiders, the Korean dosirak market is showing a similar trend that Japan has been going through for years.

“Japan, a country that faced demographic changes such as the increase of single-person households, low birthrate and an aging population before Korea, has the highest proportion of people who purchase home meal replacement products including lunch boxes at convenience stores over other retailers such as hypermarkets and department stores,” Lee said.

Sales of boxed lunches account for 30 percent of convenience stores’ total revenue in Japan, while they make up 6 percent of their Korean counterparts’ sales.

“Although the food culture in Korea and Japan differ, the dosirak market has vast growth potential as local convenience stores try to catch up with the neighbor country’s trend,” Yoo Jung-hyun, a researcher at Daeshin Securities said.

Efforts by firms to lure their customers to pick up lunch boxes from their shelves are diverse.

Korea Seven, the domestic operator of 7-Eleven, focused on providing quality rice, as Korea’s staple food makes up the largest part of each lunch box.

The firm, which sells some 41,000 boxed meals per day, uses freshly harvested local rice and employs rice sommeliers who are in charge of the whole rice cooking process from the source of origin to nutrition and variety.

The country’s largest convenience store brand CU gives variety to the selection to change with the seasons and occasions in a bid to meet sophisticated consumer needs.

“Customers in their 20s and 30s showed high satisfaction over the cheap price of dosirak, but we found that they look for products that give feelings of home-cooked meals,” said Cho Sung-wook, product development director at BGF Retail, CU’s operator.

In April, CU introduced the “Double Big Table,” where the side dishes change three times a week. A lunch box meal that has nine different side dishes in one product became the best-selling dosirak over other competitors just three days after it hit the shelves.