A retrospective of designer Lee Young-hee traces the iconic hanbok designer’s four-decade quest to modernize the Korean traditional costume and promote it in the global fashion stage.

From traditional hanbok style, consisting of a short bolero-style blouse and a full skirt, to contemporary evening gowns that are reminiscent of hanbok’s restrictive use of colors and delicate silhouettes, some 100 of Lee’s hanbok creations are on display at Dongdaemun Design Plaza in Seoul until Oct. 9.

Lee, 79, has been on the front line to promote hanbok in the global fashion world. She was the first Korean hanbok designer to showcase her creations at pret-a-porter collections in Paris in 1993.

“I have kept in mind the motto ‘hanbok should change as the world changes,’” said Lee at a guided tour of the exhibition for press last week.

When a typical hanbok consisted of a blouse and a skirt in vivid colors, she used rarely utilized colors such as gray, while keeping the design classic. The gray hanbok dresses earned her much success, drawing huge popularity in the 1980s. Seven pieces of hanbok from light gray to black are on display at the exhibition.

One of Lee’s most radical attempts was to get rid of the blouse and present the skirt as a strapless dress. The strapless hanbok gown, first presented in Paris in 1994, became a sensation with its elegant roomy silhouette that allows freedom of movement for the female body. A French fashion journalist from Le Monde described the gowns as “clothes of wind.” 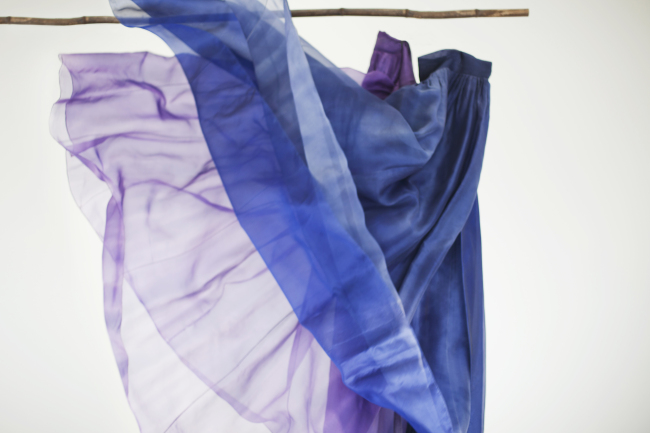 "Clothes of Wind" by Lee Young-hee (Maison de LEE YOUNG HEE)
In the exhibition, electric fans blow wind to several pieces of the “clothes of wind,” inviting viewers to have a close look at their sleek texture and lush color spectrums.

“People ask me where I get ideas for new design and color. No one taught me about hanbok. I learned it from original forms of hanbok, their colors and accessories,” Lee said.

The exhibition includes some of her sources of inspiration -- collections of patched fabrics, hair accessories, floral shoes and traditional socks. They have been on permanent display at Lee’s private museum in New York’s Lee Young Hee Korea Museum, which was established in 2004. 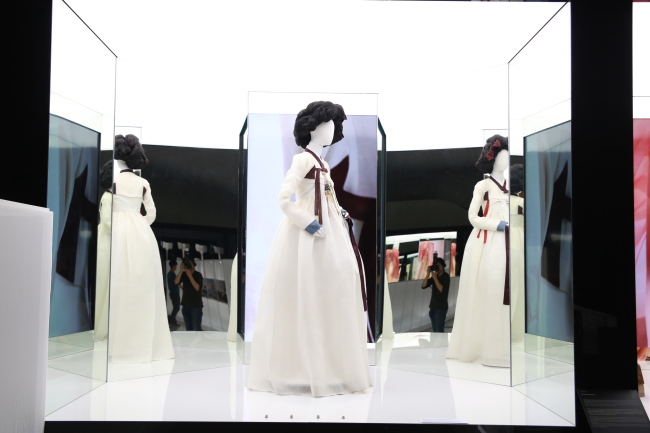 "Shin Yun Bok Dress" by Lee Young-hee (Maison de LEE YOUNG HEE)
Shown at the Haute Couture show at the Embassy of Switzerland in Paris in 2012, the “Shin Yun-Bok” dress, inspired by the 18th century “Portrait of a Beauty” by Joseon era painter Shin Yun-bok, presents a black-and-white contrast in the fabric and collar, successfully elevating the long-loved image of traditional Joseon beauty to a contemporary elegance.

Another dress made to commemorate the 120th anniversary of the diplomatic relations between South Korea and France also highlights Korean sophistication, expressed through delicate embroidery that runs down the front side of the outer garment and sheer pink fabric.