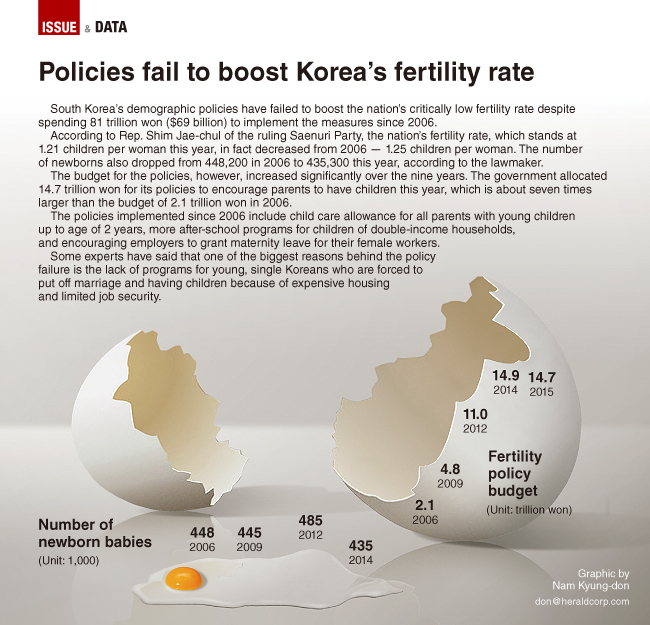 The budget for the policies, however, increased significantly over the nine years. The government allocated 14.7 trillion won for its policies to encourage parents to have children this year, which is about seven times larger than the budget of 2.1 trillion won in 2006.

The policies implemented since 2006 include child care allowance for all parents with young children up to age of 2 years, more after-school programs for children of double-income households, and encouraging employers to grant maternity leave for their female workers.

Some experts have said that one of the biggest reasons behind the policy failure is the lack of programs for young, single Koreans who are forced to put off marriage and having children because of expensive housing and limited job security.

Gender inequality in the nation’s labor force has also been also pointed out. According to Rep. Min Hyun-joo of the ruling Saenuri Party, some 260,000 women were fired from their work while taking their maternity leave in the last five years.

The government expects that the nation’s military would be short of 84,000 soldiers by 2030, and the health care cost for the elderly would result in a deficit of 47.7 trillion won ($44 billion) in the national health insurance fund in the same year, if the current fertility rate continues.

The government is scheduled to announce its revised demographic policies for the next five years -- 2016-2020 -- next month.