The most recent spring season of the GOAT ― “greatest of all time” ― basketball league brought the largest turnout so far. The eight-week league was composed of teams of eight picked in a draft. The teams ― capped to six due to space constraints ― played in a round robin tournament with playoffs following.

Founded in 2013 by American expat Hindson Her, membership currently stands at over 1,300 on their Facebook group. The size of the group allows it to run seasonal leagues in addition to casual pickup games on Saturdays and some weeknights, catering to all skill levels. 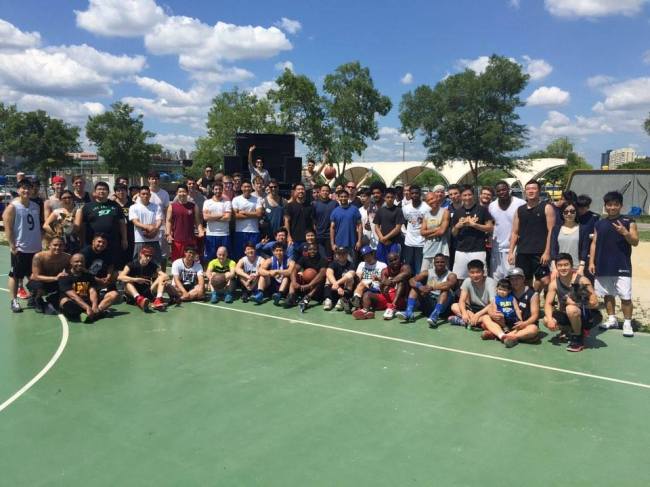 “It really started to take off in 2014 when we hosted our first winter league ― that’s when we realized that people were finding out about us through either word of mouth or the Internet,” says executive director Jason Minkee Kim.

The group consists mainly of Americans and Canadians, but is open to all, and has recently seen a rise in Korean participants. While based in Seoul, they have had players from nearby cities such as Anyang and Ilsan join.

The directors have high hopes for the upcoming summer league, due to begin in July or August.

In addition to playing for leisure, GOAT basketballers also play for a cause, using their numbers to make a difference. Last month they hosted their sixth fund-raising tournament, supporting the Myung Jin Children’s Welfare Center, an orphanage in Gangdong-gu, eastern Seoul. They previously hosted tournaments to support the SOS Children’s Orphanage as well as charities in the Philippines.

Seventy members entered the Myung Jin tournament, raising over 1 million won ($900). The money is to go toward fans to keep the children cool during the summer, which the group will install themselves. The group’s events are aided by a variety of sponsors, including Mitchell & Ness clothing retailer Beacoz and a number of popular restaurants and tech start-ups.

Kim attributes the success of GOAT basketball to the positive attitude of the group as well as the camaraderie it fosters.

“The goal was not to only play basketball, but also use it as a platform where we can inspire people to excel on and off the courts. ‘Be the GOAT’ is our slogan and has been a great reminder that’s caught on with the players,” says Kim.

The close friendships cultivated by the group are not restricted to time spent on the court. The players socialize after games and online.

“We emphasize community that goes beyond the courts we play on. Through it all we’ve become a band-of-brothers, a family of different backgrounds.”

The group’s schedule can be found at www.facebook.com/groups/goatbasketball.