By Korea Herald
Published : May 19, 2015 - 19:06       Updated : May 19, 2015 - 19:06
At a time when national borders are blurring, Korean superrich ― both citizens and emigrants ― are setting up shop around the world. As these overseas Koreans run their businesses, not only do they play a role in representing their roots from afar, but they also show that people can succeed after going through much hardship. 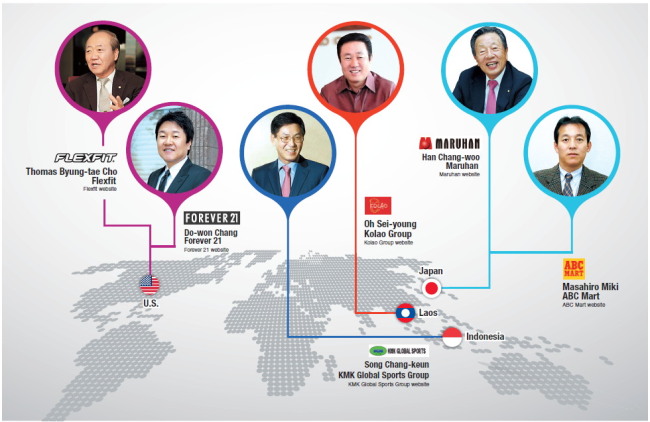 Many Korean and Korean emigrant businessmen work in other Asian countries, particularly in Japan and Southeast Asia. In the case of Korean-Japanese entrepreneurs, many chose business as a means to overcome discrimination.

One of them is Maruhan chairman Han Chang-woo. Maruhan, which is a combination of the Japanese word “maru” ― meaning marble ― and Han’s last name, is a pachinko machine company. Pachinko is a mechanical game machine used in arcades and gambling that fires balls into a machine, where the player must capture as many balls as possible to win prizes.

Maruhan currently holds a 70 percent market share in the pachinko industry, and Han is currently one of the richest businessmen in Japan. His total assets are estimated to be worth about $5.4 billion.

Han was born in 1931 at Samcheonpo (currently Sacheon), South Gyeongsang Province. He emigrated to Japan in 1947, and set up Maruhan in 1972 after experiencing poverty and discrimination.

He later expanded his business to banks, insurance, construction, food and more. Han also donated $5 million to set up the Han Chang-woo Nakako Education and Culture Foundation at his hometown Sacheon in order to promote education.

Masahiro Miki is the founder of ABC Mart, a shoe retailer. Not many people know that Miki is Korean-Japanese with a Korean name of Kang Jeong-ho, as he seldom shows himself in public.

Miki, who had been interested in import clothing retail, switched to selling shoes when he realized that the Japanese shoe industry was not particularly competitive. ABC Mart found success and also spread to South Korea and Taiwan, and Forbes listed him as Japan’s 11th richest this year.

He is said to be a rational and meticulous entrepreneur, and is also known to work alongside employees in the shop during the weekends.

There are many Korean businessmen who succeeded in Southeast Asia. Most of them found their success from traveling to Southeast Asian countries as regular Korean sales workers, who then saw potential in the market and relocated to realize their dreams.

Song Chang-keun, who goes by the name C.K. Song, is the president and CEO of KMK Global Sports Group in Indonesia. He worked at a company that manufactured Nike shoes in 1984, but when the shoe business in Korea started going downhill, he moved to Indonesia in 1988 to invest in the local shoe business, but failed.

He decided to try again by setting up a shoe parts manufacturing business with just $300. In 1990, Song acquired a local shoe factory and started manufacturing Nike shoes in 1993.

Today, KMK Global Sports Group earns about $250 million in yearly sales by manufacturing shoes via original equipment manufacturing to brands such as Nike and Converse, as well as producing its local brand “Eagle,” which sells about 3 million pairs daily and is one of Indonesia’s leading shoe brands.

Oh Sei-young, founder and CEO of Kolao Group, is known for building his business from scratch. Oh served in the ROTC and worked at Kolon Global in 1987, at the Vietnamese branch’s trade division.

Oh, who had always dreamed of starting his own company, set up a trading firm dealing with used cars in 1990, but went bankrupt when the Vietnamese government stopped importing used materials after joining ASEAN in 1995.

Afterward, he traveled to the Indochina peninsula, where he saw potential in the used car market at the Laotian capital Vientiane. He borrowed 2 million won ($1,800) from his sister and started a used car retail business there in 1997, which became the start of Kolao Developing.

Kolao Group, named from an amalgam of “Korea” and “Laos,” is currently in the distribution, construction and finance businesses. Its yearly sales reach up to $400 million, and Oh’s assets are estimated to be around $428.5 million after having his shares listed. He is also ranked 46th in Forbes’ 2014 list of Korea’s 50 richest.

A number of Koreans have started their business in the U.S. and have managed to achieve the American Dream.

One of the most notable is Do-won “Don” Chang, founder and CEO of Forever 21. Chang, who used to work delivering coffee in Seoul, emigrated to the U.S. in 1981 to seek his fortune.

When he saw that people in the garment industry “drove the nicest cars,” he and his wife, Jin-sook, set up “Fashion 21” in Los Angeles in 1984, later changed to “Forever 21.”

The business eventually grew outside the Korean-American community to the rest of the U.S., eventually spreading overseas including South Korea. Chang and his wife currently own assets of $6.1 billion together, and he was listed 248th on Forbes’ Billionaires list in 2015.

Thomas Byung-tae Cho, president of Flexfit LLC, has also successfully created his own cap empire despite hardships. Cho, who was a coach for the women’s handball national team in 1974, had $200,000 in debt when he started his business in New York the following year. He personally sought buyers for his cap business, cap samples in his hand.

Cho was initially rejected by buyers due to his lackluster English, but saw success when he presented caps bearing well-known logos of companies such as Budweiser, Ford and GM. Corporations saw the caps as an effective billboard of sorts, and orders started piling in. Flexfit caps have also been in great demand among sports clubs such as the MBL, NBA and NFL.

The Flexfit caps, which are made of highly elastic spandex material, grew so popular to the point that they have became target of theft. Flexfit currently produces 35 million caps per year with $250 million in yearly sales.

By The Korea Herald Superrich Team(sangyj@heraldcorp.com)