“The operating profit of the company fell for the sixth consecutive quarter in the second quarter of this year,” said Lee Sang-gu, a stock analyst from Hyundai Securities.

“From the investors’ point of view, the firm’s premium retail chain business seems to be losing growth momentum.’’

According to financial data from local stock brokerage firms, foreign shareholdings in Hyundai Department Store, which peaked at 46.1 percent in 2011, slid to 43.5 percent in 2012 and 41.6 percent in 2013. 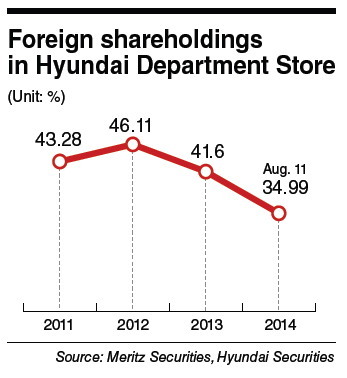 As of Aug. 11, the ratio of foreign investment stood at just under 35 percent.

The deal reflects the retail group’s strategies to go beyond the retail sector to diversify its businesses for growth.

“To restore investor confidence, it is important for the retail giant to create new growth momentum in its core business, as more than half of its sales come from Hyundai Department Store,” Lee said.

“The problem is that high-end department stores face limited growth as Koreans in the middle and even high income brackets have started to cut their spending to prepare for retirement,” Lee said.

As the pattern of consumption changes with the aging population, rivals such as Lotte and Shinsegae have been expanding their premium outlet businesses over the past few years.

“Hyundai Department Store is a late-comer in such terms,” Mirae Asset Securities said in a report.

To address these shortcomings, Hyundai plans to open its first large-scale premium outlet in Gimpo in January 2015. A second such outlet is slated to open in the Songdo district of Incheon in the latter part of next year.

But it would take more than a year to see whether these premium outlets will help improve the embattled department store’s performance, analysts said.