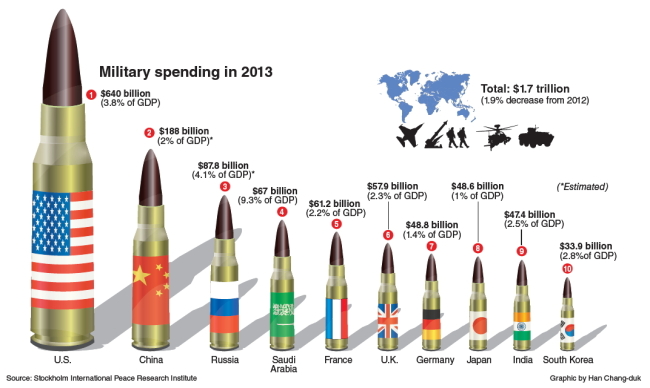 Global arms investment in 2013 fell by 1.9 percent from the year before, mainly due to a sharp drop in military spending by the United States, a Swedish arms watchdog said Monday.

According to the annual report by the Stockholm International Peace Research Institute, countries worldwide spent $1.7 trillion on boosting their militaries. The annual budget of the U.S. came first with $640 billion, but was 7.8 percent less than the year before.

With the exception of the U.S., however, the world saw a 1.8 percent increase in military expenditure. China was the second-biggest arms spender with $188 billion, while Russia, in third place, boosted its budget 4.8 percent to $87.8 billion.

South Korea was the 10th largest spender with $33.9 billion, which accounted for 2.8 percent of its gross domestic production.