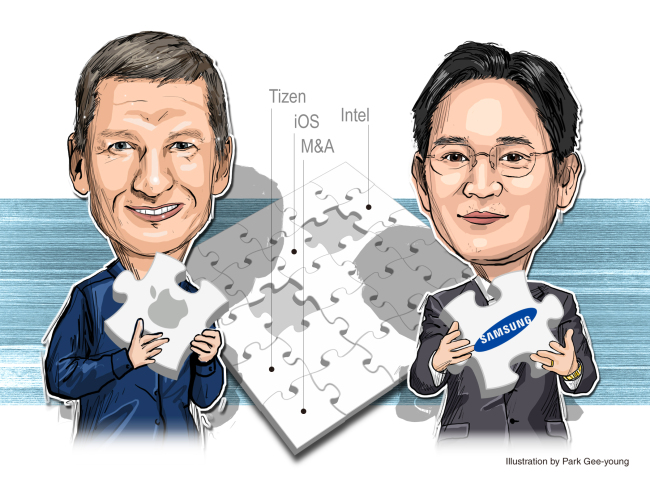 As the world’s leading tech companies, Samsung and Apple are labeled the largest technology enterprise and the most valued company, respectively. Naturally, the pair has had a heated rivalry, including an ongoing patent dispute.

However, the time may have come for the two to set aside their differences and forge an alliance.

The news came after a Sacramento, California district court judge on Tuesday asked Apple and Samsung to hold talks one more time before a new patent infringement trial is scheduled to kick off in March.

The timing is critical, for both Apple and Samsung.

For Samsung, it would be all about access to the 13.4 percent market share Apple has in the global smartphone market. Samsung has 32.6 percent.

For Apple, while it may have a lead in software, it has built an infamous reputation for being one of the most closed-door enterprises in the world.

At a smart TV conference last week, Imad Sousou, director of Intel’s Open Source Technology Center, echoed industry-wide criticism when he said “the most successful companies in the world are great at open source.”

Samsung is said to be more open-minded, but its lagging software platform is its biggest weakness. The South Korean tech giant may have been able to mimic and even trump Apple in the game of devices, but it lacks the kind of innovative software that Apple has cultivated over the years: Macintosh, Lisa Office and iOS.

This is why Samsung is persistent in developing Tizen, which some see as a lost cause, engaging in M&As with software-centric firms, allying with Intel and holding the first developers’ conference.

Given their respective strengths and weaknesses, some speculate that Apple and Samsung will end up sharing software platforms to offer access to both iOS and Android (or possibly Tizen) via their combined handsets.

“Samsung’s main strategy for dealing with the industry and media scrutiny in its relations with Apple has been ‘hostility,’ meaning Samsung is determined to make it appear as if it is on bad terms with the Cupertino-based firm. But what’s really happening is that Samsung and Apple know and are working on working together,” said one source close to the matter.

This is why many presume that Samsung discussed software competitiveness with Google chairman Eric Schmidt when he visited Korea last month.

The fact that traditionally high-valued “hardware” companies such as Sony, HTC and Blackberry are all going belly-up is another reason why Samsung is so anxious to avoid the same kind of fate.

As a virtualization software leader, VMware offers solutions for both Samsung and Apple.

Gelsinger appeared to be skeptical about the two giants joining forces but indicated such issues had come up when he recently met Apple CEO Tim Cook.

Chips are another bargaining point Samsung can use against Apple.

Samsung recently said it was pursuing the “one-chip,” which will combine the capabilities of both a modem and application processor.

The move was aimed at gaining competitiveness in the next generation of mobile devices, experts said.

Further, Samsung is closely working with Intel, a global leader in system-on-chips, aiming to share Intel’s market share of over 20 percent.

The top priority for now appears to be Tizen, but underneath the wrappings, Samsung is eager to access Intel’s market share. Samsung last year had less than 5 percent of this market. Qualcomm is ahead of Samsung with about 5.8 percent, according to iSupply.

Nothing has been decided, and skepticism prevails that the speculation is nothing more than that.

“Apple has a long history of keeping to itself, and sharing platforms doesn’t sound like a viable option,” said one source close to both Apple and Samsung who wished to remain anonymous.

“Samsung, on the other hand, is more in need of innovation, innovation only Apple can offer, but Apple won’t be giving it away so easily.”

Analysts also appeared to be uneasy about the idea.

“I really can’t talk about that at this point,” said Noh Geun-chang, a senior analyst with HMC Securities.

For the time being, Apple is expected to continue relying on LG as its main Korean vendor ― outside of mobile processors ― and things will look the same as ever, meaning a big deal likely isn’t on the horizon just yet.

But insiders say it’s only a matter of time before the pieces of the puzzle fall together to show what the bigger picture is.