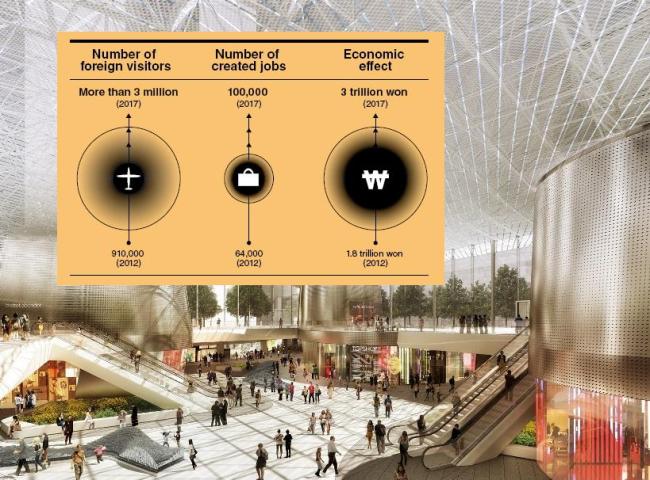 While all economic organizations are focusing on realizing the creative economy that has the become the Park Geun-hye administration’s national slogan, COEX set its eye on MICE, an integrated concept connecting exhibitions and conventions with tourism and cultural content.

The Korea International Trade Association and COEX recently signed a memorandum of understanding to initiate a new MICE Cluster in Samseong-dong, southeast Seoul, where the current COEX Mall is undergoing a broad-scale renovation.

The term MICE, an abbreviation for meeting, incentives, convention and exhibition, is largely regarded as an effective all-in-one solution to promote international business transactions and to nurture local tourist content simultaneously.

The idea is to remodel the local industries so that they may actively meet the needs of the foreign companies and business travelers.

A report published earlier this year by global consulting agency McKinsey and Company said that Korea’s key opportunity for new growth lies in these four components that constitute MICE.

“We plan to diversify the types of businesses to respond to consumer needs and to expand public spaces for cultural, tourist and entertainment uses,” said Justin Lee, KITA’s executive managing director.

“The renewal is not just about an expansion of the existing shopping area but part of the big picture to upgrade the entire site into a comprehensive culture platform.”

“One of the aims of the cluster project is to rebrand COEX as a must-visit destination for both the domestic and foreign population, especially trade buyers and business travelers,” said COEX CEO Byun Bo-kyung.

The MICE industry is also an effective example of creative economy, the core economic slogan put forward by the Park Geun-hye administration, he explained.

“The capacity of COEX has already caught up with that of Roppongi Hills in Japan and is now giving chase to Marina Bay Sands in Singapore,” Byun said.

In fact, since the late 1990s, leading business-hub countries such as Hong Kong and Singapore have been competing fiercely to attract international conventions and integrate them into local industrial growth.

But so far, Korea has failed to make the best use of its high-quality convention spaces, Byun pointed out.

COEX, which first kicked off as Korea Exhibition Center in 1979, has over the decades become one of the top landmarks for business travelers, incorporating some 200 exhibitions, 40 broad-scale international conventions and 4,000 various events every year. The number of daily visitors as of the end of last year was 140,000 on weekdays and 250,000 on weekends, according to officials.

“Once the COEX Mall renewal is completed late next year and the cluster plan gains momentum, the total number of yearly visitors of the World Trade Center site is expected to rise from the current 910,000 to at least 3 million by 2017, hopefully up to 5 million,” said a COEX official.

The general economic effect, too, is expected to soar from 1.8 trillion won ($1.68 billion) to some 3 trillion won, he added.

The Samseong-dong MICE Cluster project led by COEX has also inspired other international complexes and conventional spaces in the metropolitan area.

The state-run rail operator KORAIL recently gestured toward reviving its long-stagnant plan to build an international business complex around Seoul Station, according to officials.

The blueprint, including an extensive convention center and a set of new hotels and shopping malls, is referred to as the “Gangbuk version of COEX.”

KINTEX, the nation’s largest exhibition and convention center located in Goyang, Gyeonggi Province, has also signed a series of MOUs with tourism industry players in an aim to gain an initiative in the promising MICE market.