The IFEZ, covering 209 square kilometers, is located within Incheon Metropolitan City and consists of the three regions of Songdo, Cheongna and Yeongjong Island where Incheon International Airport is located. It is the nation’s first FEZ, designated in 2003. There are currently eight FEZs nationwide.

In 2003, with the vision of transforming Korea into a Northeast Asian business hub, the Korean government started creating free economic zones with globally competitive business and living environments in a bid to attract multinational companies and professionals to Korea.

IFEZ attracted an annual record high of $2.07 billion of foreign direct investment in 2012, which was second-highest amount after Seoul, according to the IFEZ Authority. 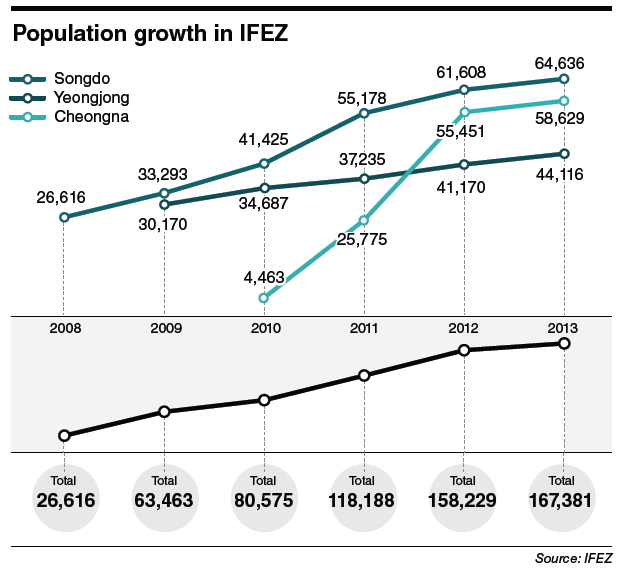 The zone started from scratch with the vision to build an international city on reclaimed land. That vision is taking shape after decade-long development. The population living in the three districts of the region rose to 167,381 in February this year, six times the 26,616 living there in 2003.

Among the three areas in the IFEZ, Songdo takes the lead in attracting FDI. For the past decade, it has attracted investment from domestic and multinational conglomerates, including Samsung, Lotte and BMW.

The IFEZ also became host to head or branch offices of international institutions, including the Secretariat of the Global Climate Fund last year. The World Bank Seoul office is expected to be located in Songdo as well.

To attract global talent, Incheon City and the IFEZ Authority have enhanced the living and educational environment. The Songdo Global University Campus, a complex for prestigious international universities and research institutions, attracted the State University of New York last year. According to the IFEZ Authority, about 10 foreign universities are considering the location for their Korean branches.

“In a decade, the IFEZ has evolved into an international city with a population of about 160,000. We still have a long way to go to realize the ambitious goal to build a globally competitive city with a population of 500,000. For the completion of development by 2020 as planned, we will improve the IFEZ to constantly grow and mature, and to suggest the direction it should move toward to become an attractive and habitable international city,” IFEZ commissioner Lee Jong-cheol said.

A habitable city is defined as a self-sustaining city that people move to because of its pleasant living conditions and job opportunities.