The Korea Hydro and Nuclear Power Co. on Friday announced the two candidates, ruling out a third in Uljin, North Gyeongsang Province.

Four atomic power plants will be built in each of the two locations after the Ministry of Knowledge Economy completes on-site inspections and environmental surveys by no later than late next year.

“Our long-term power supply plan is to increase the portion of nuclear power from the current 30 percent to 40 percent by 2040, and the plan has not changed,” a Knowledge Economy Ministry official said. 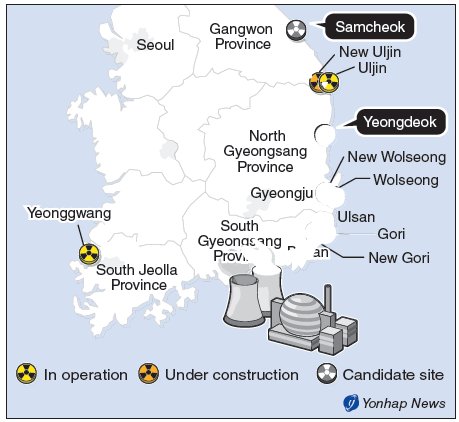 “It will be highly important to repeatedly check on the safety of the facilities especially after the Fukushima plant accident.”

The Seoul government had postponed the announcement, previously scheduled for between April and June this year, in deference to a rise in anti-nuclear sentiment after radioactive material leaked from the tsunami-stricken Fukushima nuclear power station in March.

A public backlash is expected in Uljin over its omission, but also in Yeongdeok and Samcheok against nuclear power plants.

The government completed building the new Kori atomic power plant No. 1 in Ulsan and is reviewing the timing of ground-breaking for two new Uljin units.

Considering that the nuclear power stations will run out of space to store spent nuclear fuel rods in 2016, the ministry plans to start public discussions on how take care of the spent fuel in the first half of next year, boding major controversy over the overall nuclear power policy.