[Weekender] Explore the heart of Seoul by bike 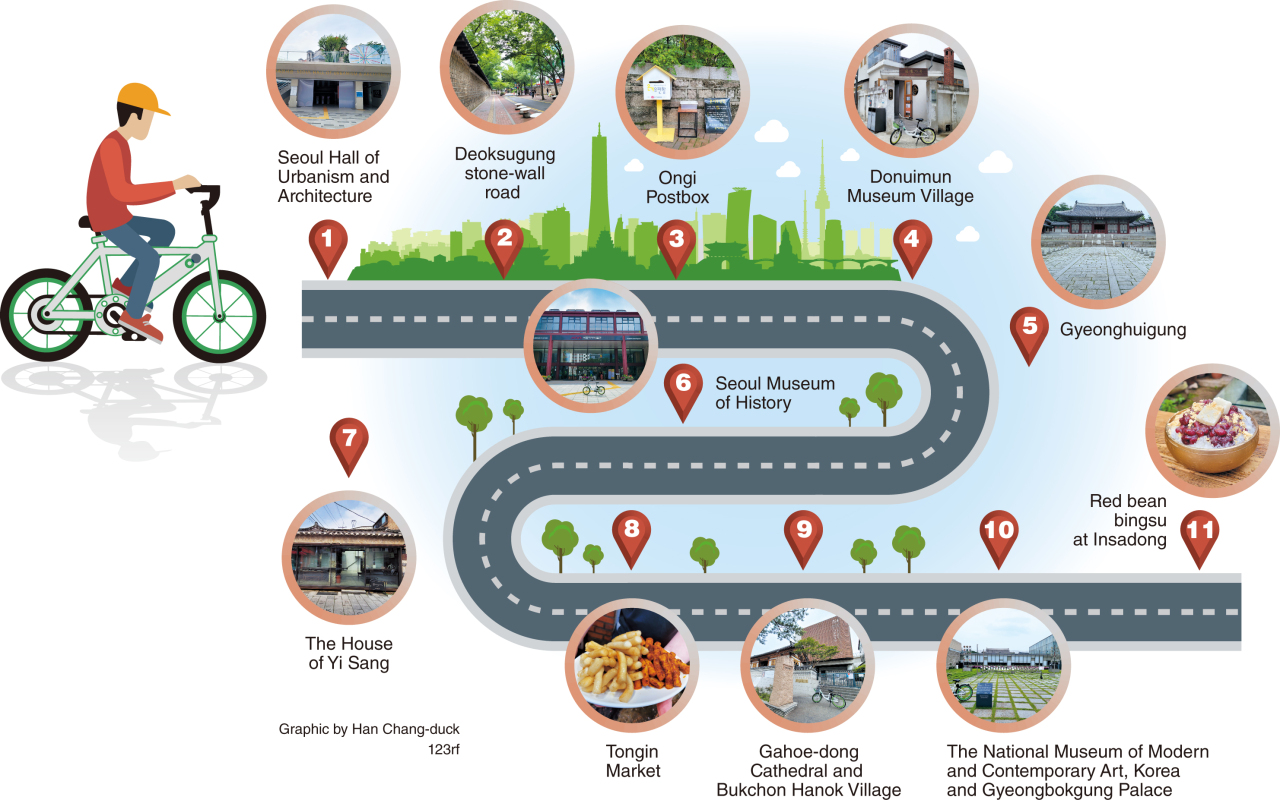 Biking in Seoul, you can come across historic traces of the city which you may otherwise miss when taking bus, subway or car to get around.

Here is a bike-ride course that takes you around the heart of Seoul -- from Deoksugung Palace’s stonewall road to Insa-dong. If you don’t have a bike – don’t worry – the city has a bike rental service named Seoul Bike or Ddareungi, through which you can rent bikes at Ddareungi stations across the Seoul.

You can start your bike journey at the Seoul Hall of Urbanism and Architecture in central Seoul, where a Ddareungi station is located. After checking out the green bicycle for two hours, bike along the Deoksugung, stonewall road which is a 1-kilometer road around the Palace. The stonewall is a popular walking spot for its beautiful, seasonal scenery.

While biking along the path, you will encounter a small yellow postbox called “Ongi Post Box.” All letters -- in Korean and English -- that are dropped into this mailbox will receive replies.

At the end of the stonewall road, you will run into Donuimun Museum Village that shows the history of Joseon-era to modern age. Some 40 houses and buildings from the 1900s to the 1980s are preserved here.

After looking around the village, you can stop by the nearby Gyeonghuigung and the Seoul Museum of History. If you want to look around the museum, you can park your bike at the Ddareungi station located right in front of the museum. The museum hosts exhibitions and archives that show how the city has developed.

Built in 1617 during the reign of King Gwanghaegun, Gyeonghuigung is one of the five royal palaces from Joseon era. While most the palace buildings were destroyed during the Japanese colonial era (1910-1945) and the palace today looks very different from the original, the few structures that do stand exude the elegance and dignity of a royal palace.

Biking north from the museum, you will reach Seochon, an old neighborhood whose name translates as “west village,” referring to its location to the west of Gyeongbokgung, the Joseon era’s main palace. Along a winding alley in Seochon is the house where Korean avant-garde modern poet and writer Yi Sang once lived.

If you are find yourself hungry, stop by the Tongin Market in Seochon, a market that was established in 1941. You can try rice cakes fried in oil called gireum tteok-bokki here, a street food that the market is known for. Two varieties are available -- seasoned with soy sauce or spicy red pepper flakes.

After the market, you may realize that you bike’s two-hour rental time is about to expire. At the Ddareungi station in front of Jakyo Church near the market to rent a bike again for another two hours to avoid extra charges.

Next, leave Seochon and head to Samcheong-dong, an area east of Gyungbokgung where a cluster of galleries and museums are located. On your way, you will pass by the Blue House, the official residence and executive office of the president. In Samcheong-dong, you can visit Gahoe-dong Cathedral and Bukchon Hanok Village after parking your bike at the bike station near the cathedral.

The cathedral stands on the spot where Father Zhou Wenmo, the first Catholic missionary in the Joseon era, who came from China, celebrated the first Mass in Korea. Nearby, Bukchon Hanok Village has a cluster of traditional houses.

The last destination on your bike trip is the National Museum of Modern and Contemporary Art, Korea. Now you can return your bike at the Ddareungi station at the museum. MMCA Seoul is currently showing “Catastrophe and Recovery,” an exhibition that aims to examine the impact of the pandemic and offer comfort to people. Online reservations are required in advance via the museum’s website.

Next to the museum is Gyeongbokgung, the largest palace among the five palaces in Seoul. The palace closes on Tuesdays. If you have time, you can visit the Royal Palace Museum and the National Folk Museum, which are located in the palace grounds, as well as stroll around the palace.

Since you have returned your bike, walk a few minutes to Insadong, a must-visit destination for first-timers in Seoul, where you can enjoy a variety of Korean food or buy some souvenirs. Recommended dessert in the summer time is red bean bingsu, which is shaved ice with sweet red bean paste on top. It is a perfect way to finish your bike trip in Seoul.