Defining the symbolic cityscape of Seoul is Sejong Main Street, a 10-lane road that runs across the downtown area, stretching from Seoul Station to Gwanghwamun Square.

Halfway along this main road, just north of Sungnyemun, the southern gate of Seoul, is the “Taepyeong-ro zone,” location of landmark buildings such as the palace Deoksugung and Seoul City Hall.

Among numerous high-priced edifices in the vicinity is a 25-story, brown, shiny building, which many people still refer to as the Samsung main building, to the perpetual distress of the incumbent owner.

The building since 2016 has belonged to Booyoung, a real estate-rich construction group and South Korea’s 16th-largest conglomerate by assets.

After purchasing the building for 580 billion won ($511 million) from Samsung Life Insurance, it was renamed as the Booyoung Taepyeong Building. The deal drew attention not just for the staggering monetary figure, but because it was perceived as market bigshot Samsung’s signal of asset liquidation.

Booyoung has made efforts to make the most out of its expensive acquisition and, more importantly, to mark its presence over the vestige of the previous owner and occupier.

While welcoming several companies -- some of them Samsung affiliates -- as tenants, the construction group also created an extensive food and beverage zone in the basement.

The area of 2,500 square meters, named “Sikgaekchon” after a famous cartoon series by Huh Young-Man, features various restaurant franchises that appeared in the cartoon.

Despite the costly renovation, however, Booyoung has apparently so far failed to capitalize on its investment. While the Taepyeong building struggled with a vacancy rate as high as 40 percent last year, other assets that Booyoung acquired from Samsung also fell below profit expectations. 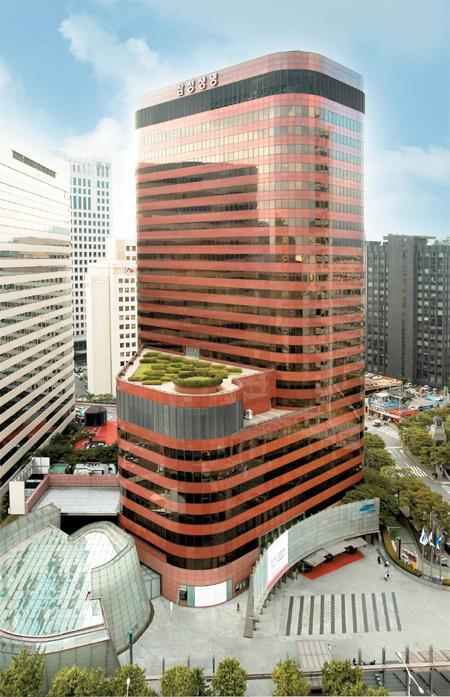 
Marking a similar case is the Booyoung Eulji Building, the former headquarters of Samsung Fire and Marine Insurance, which it bought for 440 billion won in a separate deal in 2016.

But weighed down by the vacancy rate and low profitability, the new owner put it for sale in 2018. That deal was canceled earlier this year, however, on a lack of priority bidders.

Booyoung’s distress over the former Samsung buildings largely occurred during the absence of Chairman Lee Joong-keun.

Indicted for embezzlement and breach of trust, Lee was handed a five-year jail term and fine of 100 million won in November last year, a decision he immediately appealed.

Amid the prolonged leadership vacuum, speculations mounted that the construction group may even pull out of the real estate leasing market at some point.