However, it’s not just text being exchanged. Conversations are taken over by colorful character emoticons -- or virtual “stickers” -- such as a blank-faced bear crying in a puddle of tears or a rabbit blissfully skipping around and blowing kisses. 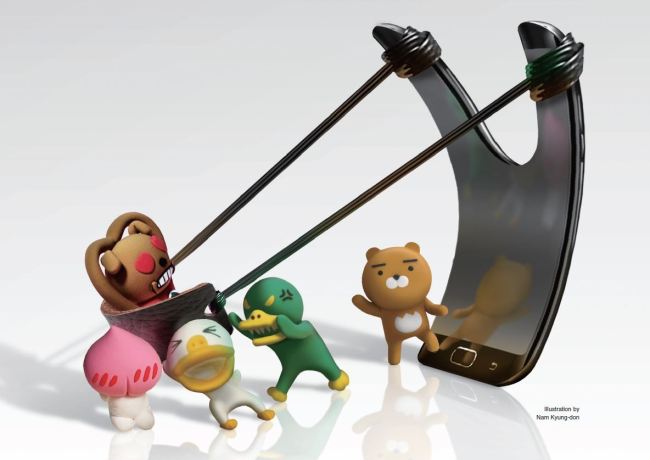 “I think I use them in most of my mobile conversations,” said Park, who owns dozens of emoticon packages on KakaoTalk, the most widely used mobile messenger app in Korea. “On top of being cute and funny, they help convey in one cue how I’m feeling in a digital setting.”

From time to time, Park will browse through the emoticon sticker shop on KakaoTalk to purchase a new sticker set for herself or friends. At home, she even has light-emitting diode lamp shaped like her favorite character, Ryan the Lion, sitting at her bedside, she added.

Introduced around five years ago, initially by Naver-owned mobile messenger Line and later by KakaoTalk, character emoticons have taken on a definitive role in people’s mobile habits, particularly for the younger generation in their teens and 20s.

Born in the age of the smartphone, these new emoticons differ starkly from traditional text-based emojis that purportedly mimic facial expressions, such as the widely used ^^ in Asia or classic :) smiley face that once dominated the online communication scene.

Unlike their simpler predecessors, the modern emoticons that have encapsulated today’s generation are characters with unique stories of their own, distinct personalities and a diverse range of emotions that enrich text-based mobile conversations.

With growing mass appeal, character emoticons have become a steady revenue source for mobile messengers, which profit from secondary content or services offered alongside its free messaging function.

In 2016, KakaoTalk sold some 4,800 different emoticon packages on its in-app store, up from 480 in 2012. Also as of 2016, more than 14 million people had purchased character emoticons on the messenger app, according to Kakao.

Line, a messenger app that dominates some major overseas markets including Japan, Taiwan, Thailand and Indonesia, said some 441 million stickers were exchanged daily as of the first quarter of 2017. The “communications” portion of Line’s revenue, which includes sticker sales, reached 8.1 billion yen ($73.9 million) during the cited period, up 5 percent on-year.

More importantly, these digital character emoticons have recently stepped into the real world in the form of standalone dolls, accessories, stationery, cosmetics, clothing labels and even food products, fueling a character market boom in Korea and Asia.

Eyeing market potential, Line officially stepped into the character merchandising business in January 2015 by establishing a new subsidiary, Line Friends Corp. Kakao followed in its footsteps, forming Kakao Friends Corp. in May of the same year.

Both companies have been opening and expanding stores selling stuffed dolls, stationery, toys and living goods. Active collaborations with third-party brands are also underway, testimony to the marketing value of the emoticon characters.

And it has proven to be a business that sells. Line Friends racked up 78.13 billion won ($69.6 million) last year, more than double its sales of 34.13 billion won in 2015, according to its earnings report.

Kakao Friends saw an even greater earnings hike last year, reporting 70.5 billion won in revenue in 2016, a sevenfold increase from sales of just 10.34 billion won in 2015.

Active globally, Line Friends operates 78 stores in 11 countries, including Korea, Taiwan, Singapore, Indonesia, Japan, China, Thailand and Hong Kong. The company is preparing to open its first US store in Times Square in New York City in August with aims to recreate Asia’s character craze in the West.

Currently, the biggest Line Friends shop sits in Itaewon, Seoul. Like other Line Friends stores in Seoul, many of the customers are tourists from Japan, Taiwan, Thailand and Indonesia, where Line is the popular messenger of choice.


Meanwhile, Korea-focused Kakao Friends runs 17 offline shops nationwide. The opening of its first-ever flagship store in Gangnam last summer was one of the most hyped events of the year, attracting huge crowds of character enthusiasts.

Like Line, Kakao has been partnering with various consumer brands, including Toms Shoes, fast fashion brand 8Seconds and cosmetic brands Kiehl and LG Household & Health Care to reach out to a broader customer base.

Kakao Friends is even showcasing a number of travel accessories with global luxury brand Louis Vuitton in a special travel-themed exhibition in Seoul that runs through Aug. 27.

In addition to in-house emoticon stickers created by Kakao and Line, mobile messengers have become a lucrative marketplace for emoticons created by third-party artists.

Fans of particular mobile emoticon stickers are often willing to reach into their wallets for additional accessories or goods based on the characters they love, leading to new sources of revenue for artists and creators, Kakao said.

To better support this win-win business model, Kakao and Naver have even begun to operate “emoticon studio” websites where anyone can pitch their ideas for new emoticon series. If selected, their creations are featured and sold on the messaging apps.

“Over the years, KakaoTalk has grown into a successful contents platform that benefits both us and artists. We’ll continue to expand our platform globally so we can better support local creators and their work,” Kakao’s Vice President of Advertising Yeo Min-soo said.