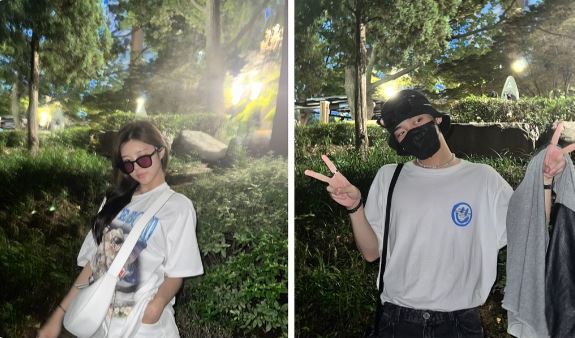 Kim Dayeon of Kep1er and Won of Ciipher are seeing each other romantically, according to a local media report on Thursday.

There have already been speculations among fans that they are in a relationship, as the pair uploaded on social media their pictures visiting the same places, wearing the same clothes.

Kep1er’s agency told the media outlet that it will not deny the rumor.

“We’re not responding to the dating rumor because we don’t see a reason,” it said.

Rain Co., the management firm for Ciipher, said it values the privacy of its artists.

The two are both aged 19. Kim was a child actor and debuted this year with a rookie girl group that was formed through a TV competition. Won debuted in 2019 as a member of 1The9, which disbanded in 2020. He returned as the rapper for Ciipher in 2021.

Kep1er, meanwhile, rolled out its third EP, “Troubleshooter,” on Thursday.

Mamamoo landed atop iTunes top songs chart in 17 regions with the group's 12th EP “Mic On,” which came out Tuesday.

The quartet swept a series of major music charts at home, and the music video for “Illella” ranked No. 1 on YouTube’s music video trending chart worldwide.

Billboard touted the lead track as “a full-fledged reminder of their commanding vocal deliveries and artistic auras” and said that the bandmates “get to show a range of colors and styles that feel celebratory of each unique member while still displaying how cohesive they are as a unit.”

StayC to greet fans in Manila

StayC will meet fans in the Filipino capital on Dec. 3, agency High Up Entertainment said Thursday.

It will be the girl group’s first overseas fan meeting event since it debuted in 2020. The group will greet fans and perform a series of hit songs, including “So Bad,” “Stereotype” and “Run 2 U.” It is planning to host similar events in Taipei, Taiwan and Jakarta, Indonesia soon. The six bandmates hosted their first-ever fan meeting in Seoul last week.

The six-member act’s most recent album was third single “We Need Love” in July. Its first EP, “Stereotype,” which came out in September last year, had scored 100 million streams on Spotify as of Saturday, according to the agency.

He will meet and greet fans and celebrate Halloween together on stage at the event, dubbed “Wonderland: Halloween.” Last year, he marked the holiday with a livestream while baking a pumpkin pie.

In the meantime, all five members of Infinite, except for L who is enlisted for his mandatory military service, gathered in front of cameras in June to celebrate the band’s 12th anniversary.