[Kim Myong-sik] Yoon should not expect favors from public broadcasters 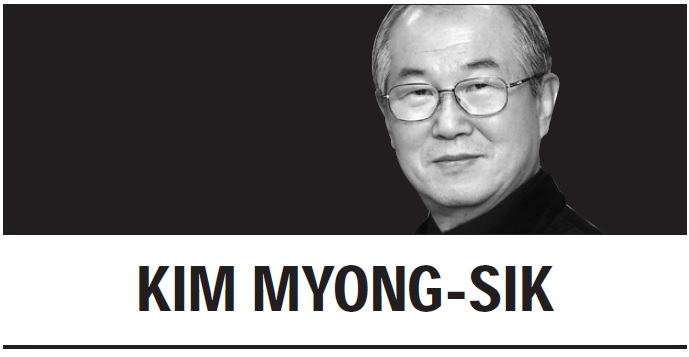 In the press world, a “pool reporter” covering a major public event on behalf of a certain group of journalists has to provide the content he or she obtained on the mission for all members simultaneously so that media outlets are given the same opportunities.

The MBC-TV cameraman who accompanied President Yoon Suk-yeol on his visit to New York last month and was chosen to cover his participation in President Joe Biden’s Global Fund conference on Sept. 22 caught the South Korean president murmuring something to his entourage, which included Foreign Minister Park Jin. He heard a few vulgar words.

He thought it was newsworthy because Yoon sounded like he was complaining about lawmakers (either Korean or American) who are usually uncooperative with administrative motions, and sent a 72-second video to the MBC news center in Seoul at 6:28 a.m. Korean time. It was released to 12 other media organizations by 7:30 a.m., embargoed until 9:39 a.m.

Mysteriously, this video clip with a caption found its way onto the smartphone of an opposition lawmaker’s aide, appeared on his blog and then was quoted by the floor leader of the Democratic Party of Korea in an attack on the president for his alleged diplomatic failures during his overseas tour, all before the embargo expired. The disclosure was a major embarrassment for the nascent Yoon administration and pulled down the new president’s approval rating.

How did it happen? The answer can be found when we ponder what kind of media organization MBC is now, and how it has become an outcast in contemporary South Korean journalism, having given up the original mission of pursuing and finding truth and disseminating them for the public good, all but losing trust from its dwindling audience.

Since its inception in Busan as the nation’s first private-run radio broadcaster owned by a local tycoon in 1959, Munhwa Broadcasting Corp., or MBC, has endured a turbulent history, experiencing employee strikes more frequently than any other media outlet, or maybe even any major industrial firm in this country.

Political changes had direct impacts on this broadcaster while it grew from a local radio station to one of the most influential public organizations, providing entertainment and information to the people of a quickly industrializing nation, enjoying high viewership rates. Reporters, producers and management have largely been politicized with the unionists gaining control of all activities.

It goes like this: New winners of power first seek to replace the top management of the radio and TV company to use the network as a publicity tool. Resisting them, unionists stage strikes -- the worst lasted 170 days -- until a compromise is reached, usually with a revision of the collective agreement in favor of the union. Another change of power starts a new cycle of internal turmoil.

Since democratic reforms in 1987, there have been at least a dozen strikes, called “refusal of production,” when programs had to be made by nonunionists and part-timers, news hours are shortened and reruns filled airtime. MBC’s TV dramas, entertainment programs and sports programming maintained high popularity, while investigative reports like “PD’s Notepad” often contained a left-wing bias.

Take the “mad cow disease” crisis in 2008 during the early days of the conservative Lee Myung-bak administration. When Lee approved the importation of American beef before making his first visit to Washington after taking office, MBC-TV stirred Korean consumer society with a "PD's Notepad" report on mad cow disease, falsely claiming that it had fatally infected humans in the United States.

Large-scale demonstrations led by leftist activists took place in Gwanghwamun Square every weekend denouncing the government’s “subservience” to Washington. Lee apologized to the people, US beef imports were suspended and the new administration lost its driving force from the start.

Choi Seung-ho, the “PD's Notepad” producer, was later charged by the prosecution over his false reporting, but he was finally acquitted by the Supreme Court, which applied freedom of expression to the case. Choi, who became a unionist hero, was appointed as president of MBC Corp. soon after the liberal President Moon Jae-in took office. Park Sung-je, another union leader, succeeded Choi as the MBC CEO.

To people who wonder how is it possible that MBC exists and operates as a major public broadcaster, having failed to fulfill the mission of “fair and objective reporting” as required by the Broadcasting Act, the company’s peculiar governance structure may offer an answer. From the early days when Gen. Park Chung-hee, the coup leader, confiscated Munhwa Broadcasting Corp. from Kim Ji-tae of Busan, MBC has drifted in changing political tides.

The body that appointed Choi and Park as MBC president was the Broadcasting Culture Promotion Association, which was formed under a special law in 1988 during the Roh Tae-woo administration for the purpose of independently operating MBC. The BCPA, called Bangmunjin in Korean, took over the entirety of the shares then owned by the state-run Korea Broadcasting System.

Bangmunjin has nine directors, all appointed by the Korea Communications Commission. The president appoints two of the five directors of the KCC and the remaining three with recommendation by the National Assembly, i.e. political parties. The differing tenures of the president, the KCC and Bangmunjin cause constant problems as the higher authorities attempt to exercise influence upon appointments to fill important vacancies.

Successive governments have attempted to control MBC by naming pro-government directors for the Bangmunjin via the KCC. The labor union, while leading internal movements against government influence, has grown to become the biggest power at the broadcaster.

The negative role of TV networks in social issues was demonstrated in the mad cow disease-related attack on Lee Myung-bak and the ouster of president Park Geun-hye through impeachment in 2017. The liberal opposition must now be relishing the victories in these two historic events as they seek to retake power in 2027, or sooner, with the help of organized leftist elements in Korean society that they believe have steadily moved to the left in recent years.

President Yoon and his right-wing supporters need to be better aware of the peril posed by MBC or other public broadcasters that are ready to pick up on any small missteps taken by the politically immature president, such as his slip of tongue in New York, for political impact rather than to serve the public’s right to know.

Kim Myong-sik is a former editorial writer for The Korea Herald and former managing editor of the Korea Times. The views expressed here are his own. – Ed.