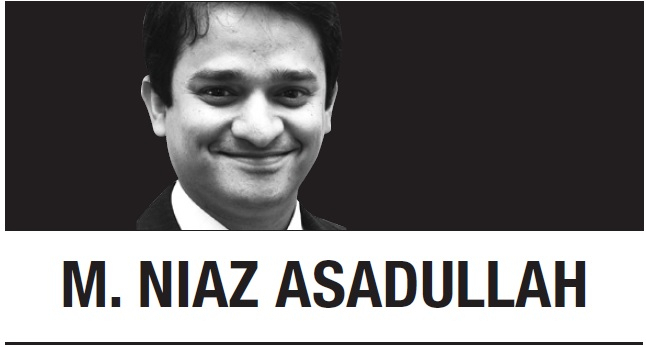 COVID-19 has disrupted labor markets virtually everywhere, pushing millions of migrant workers into poverty. In high-income Asian countries, the pandemic has highlighted these workers’ vulnerability to redundancy, pay cuts, and exclusion from vital social safety nets. The authorities in Singapore and Malaysia have deported some of those who spoke out against inadequate provisions or mistreatment in the workplace.

But, as global supply chains are restored and economies reopen, employers are facing an acute labor shortage. In the Global South, many countries have again turned to foreign migrant workers to fill the void, even removing earlier immigration restrictions.

Unfortunately, the reopening of labor markets increases the risk of human trafficking -- and potentially death -- and the exploitation of illiterate job seekers by unscrupulous intermediaries. Many aspiring workers from low-income economies must make large unofficial payments, turning migration to richer Asian countries into an expensive undertaking, with intermediary fees often accounting for more than 75 percent of the overall migration costs.

For example, the Malaysian economy has for decades relied heavily on low-skilled migrant labor from populous Southeast Asian countries. Malaysia has an estimated 1.8-3 million documented foreign workers, with another 1.5-4.6 million living in the country illegally. Several Malaysian manufacturers have been charged with labor exploitation.

The latest problem, however, concerns syndicates and middlemen monopolizing migrant labor flows. Malaysia is a major destination for South Asian laborers as well, and officially employs about 300,000 from Bangladesh alone. And relatively lucrative labor-market opportunities have led many more Bangladeshi workers to enter Malaysia illegally.

In an effort to ensure a controlled migration regime, the Malaysian government, led by then-Prime Minister Najib Razak, collaborated with business elites to establish a manpower syndicate in 2016 that monopolized the recruitment of Bangladeshi workers. Just ten of Bangladesh’s thousands of licensed recruitment agencies were handpicked to select workers for Malaysian employers, bringing in about 275,000 laborers between 2016 and 2018.

On paper, this arrangement simplified the governance process and lowered migration costs. In practice, however, it allegedly increased the cost per migrant by 50 percent, to $4,500, and did little to end other forms of labor exploitation. In September 2018, the newly elected Malaysian government of Mahathir Mohamad froze recruitment from Bangladesh in response to complaints about corruption in the hiring process.

Four years on, Malaysia has reopened its labor market to Bangladeshi migrants under a memorandum of understanding their governments signed in December 2021. The memorandum envisages the recruitment of at least a half-million Bangladeshi migrants for employment in Malaysia between 2022 and 2026, generating an estimated $45 billion in remittance earnings for Bangladesh. Under the new arrangement, migration costs incurred in Malaysia are borne by Malaysian employers.

This time, the Malaysian government had proposed creating a syndicate comprising 25 Bangladeshi agencies. But disputes over the plan have led to severe delays in actual labor recruitment.

Rights groups and activists regard the syndicate as illegitimate, arguing that it will again result in debt bondage and forced labor. The Bangladesh Association of International Recruiting Agencies has staged numerous protests in Dhaka demanding an open and inclusive recruitment regime. In Kuala Lumpur, the Small and Medium Scale Entrepreneurs Alliance (Ikhlas) and the workers’ rights NGO Tenaganita also have called for a syndicate-free migrant labor market.

But there is hidden political support for syndication. On June 16, the Malaysian human resources minister said that the Malaysian and Bangladeshi governments had jointly agreed to the 25-member syndicate. But his statement was refuted the next day by Bangladesh’s minister of expatriate welfare and overseas employment.

The contradictory claims have fueled public speculation that powerful lobbies are involved in running the syndicate. Some of the 25 Bangladeshi agencies allegedly belong to members of parliament, officials from the Expatriate Welfare Ministry, and a sitting minister.

The syndicate saga highlights an entrenched “iron triangle” of bureaucrats, politicians, and manpower-industry interests with a long history of abuse. Many suspect that the 2016 government-to-government (G2G Plus) mechanism limiting recruitment to ten Bangladeshi agencies reflected corruption in the manpower sector and among both countries’ political class.

Clearly, the post-pandemic reopening of the Asian labor market has revived the debate on hidden barriers to labor migration and multiple forms of exclusions. In a globalized labor market, the causes of exploitation are complex and transnational. Breaking the iron triangle in the migrant labor market therefore requires close collaboration among governments in both host and origin countries.

Yet, as the experience of Malaysia shows, coordinating G2G schemes through syndication poses a unique challenge. There is a growing consensus that the main beneficiaries of syndicates are neither the state nor aspiring migrants but rather a handful of politicians, public officials, and business elites.

Establishing a syndicate-free labor market in the Global South requires tackling this unholy alliance. All governments must insist on harmonizing labor agreements across countries to comply with the International Labor Organization’s conventions giving all agencies an equal opportunity to be involved in worker recruitment. Ensuring a competitive manpower industry is the best way to minimize migration costs and protect workers’ rights.

M. Niaz Asadullah, a professor of development economics at Monash University Malaysia, is head of the Southeast Asia cluster of the Global Labor Organization. -- Ed.