[Robert D. Kaplan] Russia, Iran, and the perils of post-autocracy 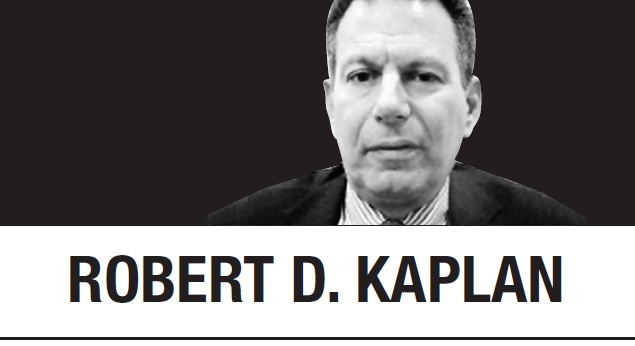 Sometimes a news cycle constitutes more than just noise. It provides a loud, uncanny signal about what may lie beyond the horizon. That happened this month, when a more hopeful, dangerous, and radically different geopolitics came into view. Within literally a few days of each other, we have witnessed the near-collapse of the Russian army in Ukraine and the humiliation of a regime in the streets of Iranian cities.

Russian President Vladimir Putin’s soldiers revealed themselves to be little more than a mob on the move, having tortured and mistreated the civilians under their control, they abruptly abandoned their positions and literally ran away from advancing Ukrainian forces. Putin’s fascist-trending national security state may be turning to ashes. His threat of nuclear war only reveals that autocratic regimes are at their most dangerous in the years before they expire.

As for Iran, the regime’s disrepute among its own subjects has been on full display, with massive protests engulfing dozens of cities and crowds demanding the end of the Islamic Republic. The rage, spread by social media, was ignited by the death at the hands of the so-called morality police of a 22-year-old woman, Mahsa Amini, who had been detained for not properly wearing her hijab. But the fuel was decades of repression and corruption, and a ruined economy.

The war in Ukraine has already changed European and indeed global geopolitics. But the end of Putin’s regime would lead to far more incalculable shifts: The Russian Federation itself could break apart, while NATO and the European Union expand eastward. Likewise, the fall of Iran’s clerical regime would alter the entire Middle East, virtually ending the decades-old Sunni-Shia sectarian war and vastly improving the strategic position of Israel and the conservative Arab states. Iraq might even stabilize as a result, to say nothing of Lebanon and Syria.

Neither the Russian nor the Iranian regime is now specifically threatened. Each could hang on for years. But this month provided a glimpse of their eventual demise. Because Putin cannot win or even get a draw in Ukraine, and because the mullahs are openly despised among broad swaths of their own population, their downfall should be viewed as a question of when, not if. In a world where news of one military defeat, or one outrage, or one obscure and symbolic act can spread instantaneously on social media, men like Putin and Iranian Supreme Leader Ali Khamenei sleep uneasily.

But while these regimes have no real future, there is no clear and institutionally viable alternative to replace them, and that is where the geopolitical danger lies. After all, we are not talking about just any two countries. Russia is a nuclear-armed great power. Iran is the major pivot state of the Middle East and Central Asia, on the brink of becoming a nuclear power.

Even when democracy succeeds, it does not emerge overnight in states with no real tradition of it. Years of turmoil often ensue. The 1990s in Russia, following the collapse of the Soviet Union, were a period of rampant crime, economic chaos, and mismanaged reforms that left roughly 70 percent of Russians living at or below the poverty line. It was from this maelstrom of dysfunctional democracy that Putin finally emerged.

Ironically, Iran went through much less of a painful, drawn-out political transition in 1979, because democracy was never the mullahs’ goal. Instead, they quickly replaced the Shah’s autocracy with clerical despotism. But the mullahs have so destroyed their society that a post-theocratic Iran could be ungovernable or even disintegrate along various ethnic and geographical lines.

That is why the democratic triumphalism that will accompany these regimes’ downfall in the coming years will rapidly give way to the sobering recognition of an awesome political void in Moscow and Tehran, with perhaps more radical forces -- Russian ultranationalists and Iranian Revolutionary Guards -- waiting in the wings. The more destructive a tyranny has been, the more pervasive the subsequent anarchy often is.

In this chaotic world wrought by the end of tyranny, the search for order will predominate. Among intellectuals and policymakers, the fear of anarchy will replace the fear of autocracy. This is easier to imagine when one considers just how difficult it will be to stabilize the utterly broken states and societies that Putin and the mullahs will have left in their wake. The decline of autocracy will only make the work of democracy that much harder.

Robert D. Kaplan is chair in geopolitics at the Foreign Policy Research Institute and the author, most recently, of the forthcoming "The Tragic Mind: Fear, Fate, and the Burden of Power" (Yale University Press, 2023). -- Ed.