[Josep Borrell] The strategy against Russia must continue 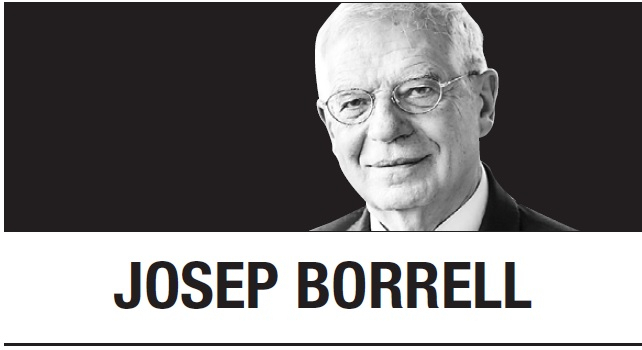 Russia’s war against Ukraine has entered a new phase. The Ukrainian army is making spectacular advances, liberating many towns and villages, and forcing Russian forces to retreat. While it remains to be seen how far the Ukrainian counteroffensive will go, it is already clear that the strategic balance on the ground is shifting.

Meanwhile, the European Union has fully mobilized to confront the energy crisis. We have filled our gas storage facilities to above 80 percent -- well ahead of the Nov. 1 target date -- and agreed to clear targets to reduce gas consumption through the winter. To help vulnerable consumers and businesses manage price surges, we are moving forward with proposals such as a windfall tax on energy companies that have made excess profits.

Moreover, in coordination with the G-7 and other like-minded partners, we are discussing plans to cap the price of Russian oil exports. And we are helping our partners in the Global South to handle the fallout from Russia’s brutal aggression and cynical weaponization of energy and food.

In short: The overall strategy is working. We must continue to support Ukraine, pressure Russia with sanctions, and help our global partners in a spirit of solidarity.

Those who question whether sanctions are working are on increasingly shaky ground. In general, sanctions have a double function: to signal and to compel. The signal expresses opposition to a state’s conduct -- which in this case includes violations of international law and wanton attacks on civilians and civilian infrastructure. And while we are not at war with Russia, the compulsion aims both to force a change in its behavior and to erode the economic and technological means for its aggression.

In a very clear signal, the EU has made the historic decision to end its reliance on Russian energy. The Kremlin has broken its contracts by dramatically reducing gas export volumes, rattling markets in the process. The ability to engage in such blackmail may seem like a Russian strength; but it ultimately is a losing strategy. Contrary to popular belief, Russia cannot easily find sustainable substitutes for the European market, because much of its gas-export infrastructure (pipelines and LNG terminals) is geared toward Europe. Redirecting the flow of gas to countries like China will take years and cost billions of dollars.

True, Russia has benefited from the recent gas-price hikes. But that doesn’t mean the sanctions have failed. Rather, we must wait to see the full effects of Europe’s decision to cut its energy imports from Russia. So far, Europe has only banned Russian coal imports and reduced its purchases of Russian oil. Yet even here, the impact has been discernible.

Russia’s coal export volumes recently fell to their lowest level since the start of the invasion, reflecting the Kremlin’s failure to find other buyers. Similarly, since the EU announced that it would reduce its imports of Russian oil by 90 percent by the end of 2022, oil prices have come down. And the Kremlin will be reducing its revenues by even more if it makes still more cuts to its gas deliveries to Europe.

As German Foreign Minister Annalena Baerbock has observed, Europe may have paid a low financial price for Russian gas in the past, but that was because it was paying in terms of its security. Russia attacked Ukraine because it was convinced that the EU would be too divided and dependent on Russian energy to act. But Russian President Vladimir Putin miscalculated.

But the proper response is not to turn inward. We still need an open economy; but we must not permit interdependence without resilience and diversification. We need to account for the political identities of those with whom we trade and interact. Otherwise, we will fall into the same kind of trap that Putin has been setting for 20 years.

The sanctions have demonstrably also had a compelling effect. The loss of access to Western technology has begun to hit the Russian military, whose tanks, planes, telecommunication systems, and precision weapons also rely on imported components.

Moreover, a leaked internal Russian government report warns of prolonged damage to the Russian economy from the import restrictions. In agriculture, 99 percent of poultry production depends on imported inputs. In aviation, 95 percent of passengers in Russia travel on foreign-made planes; and now, a lack of spare parts is shrinking the Russian commercial aviation fleet. In pharmaceuticals, 80 percent of domestic production relies on imported raw materials. Finally, in communications and information technology, Russia could run short of SIM cards by 2025, and other parts of its telecommunications sector are being set back by many years. Remember, this bleak assessment came from official internal Russian sources.

Will sanctions alone be sufficient to defeat the invader? No, but that is why we are also providing massive economic and military support to Ukraine and working to deploy an EU military training mission to strengthen the Ukrainian armed forces further. The war is not over, and Putin’s regime still holds some cards. But with the current Western strategy in place, the Kremlin will find it virtually impossible to turn the tide. Time and history are on the Ukrainians’ side -- as long we stick with our strategy.