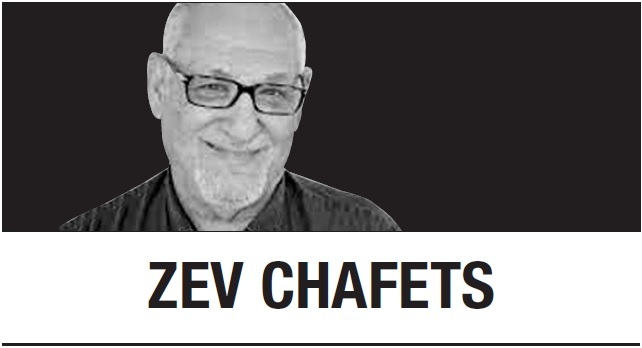 President Joe Biden has a politically risky itinerary for his scheduled trip to Israel, the West Bank and Saudi Arabia in mid-July. The question is, why he is doing this?

The tour is scheduled to begin in Jerusalem, where the president plans “to meet with Israeli leaders to discuss security, prosperity and increasing integration into the great region.” All worthy topics, but not quite in sync with the moment.

On Monday, Prime Minister Naftali Bennett announced his resignation. According to the US Embassy, Biden’s visit is still on. When he arrives in Jerusalem, he will find a caretaker prime minister, Yair Lapid, and a government incapable of making major moves or decisions.

But the battle here is for the future, and there is no reason to suppose that a summer chat between 87-year-old Mahmoud Abbas and the 79-year-old Biden will make much of a difference in the contours of the Holy Land.

Irrelevance abroad won’t prevent the president’s visit to the West Bank from becoming a talking point in America, with midterm congressional elections coming in November. Supporters and critics of Israel will argue over the departure from protocol. Biden may have concluded that this could be advantageous to his party.

But most public opinion polls show the Democrats are facing a landslide defeat in the House for reasons that have nothing to do with the West Bank or the moribund “peace process.”

The last stop on the president’s tour, in Saudi Arabia, is the one most likely to matter.

According to the White House, Biden will be meeting the leaders of the Gulf Cooperation Council and additional Arab leaders from Egypt, Jordan and Iraq. The Saudi king, Salman bin Abdulaziz, will chair the gathering. The name of his son, Crown Prince Mohammed bin Salman, was intentionally omitted from the announcement.

The White House notes that Saudi Arabia “has been a strategic partner of the United States for nearly eight decades.” That is mostly true, but it requires an asterisk when it comes to the Biden administration.

In 2018, Saudi agents in Istanbul carried out the lurid assassination of Jamal Khashoggi, a longtime Saudi journalist and Washington Post columnist. Khashoggi had many friends in the US capital, and his murder became a cause celebre.

In his presidential campaign, Biden accused the crown prince of ordering the murder. MBS, as he is known, is the kingdom’s defense minister, heir to the throne of his 86-year-old father and the current power behind it.

Biden vowed that, if elected, Saudi Arabia would pay a terrible price for murdering Khashoggi. He said he would end America’s special relationship with Saudi Arabia and turn it into an “international pariah.”

But it was a pledge he couldn’t keep. The kingdom, whatever its sins and flaws, is too big, too energy-rich and too widely allied to be isolated and turned into a pariah by presidential fiat.

The White House announcement of the meeting in Riyadh was a smorgasbord of bland offerings: Support the truce in Yemen, regional economic and security cooperation, infrastructure and climate initiatives; deter Iran, and advance human rights. Biden’s actual motive is to persuade the Saudis to pump enough oil to lower gas prices in the US before November. This will not happen without the acquiescence of Mohammed bin Salman.

The Saudi royal family is famous for its hospitality. MBS will not want a public scene, especially with his father present. Biden’s climbdown is already being choreographed.

Three days after the official American agenda was announced, he amended it. “I’m not going to meet with MBS,” he told reporters. “I’m going to an international meeting, and he’s going to be part of it.”

Sure. Maybe the two men will bump into one another at the royal palace, shake hands and say “no hard feelings.” More likely, the sulha will be accomplished in private. No matter, everyone will be aware that Biden came to the meeting as the supplicant of a prince young enough to be his grandson.

Biden’s trip to the Middle East is still weeks off. There is no one to talk to in the Holy Land. There is no one he wants to talk to at the summit. He should find a way to make amends with MBS that doesn’t require an 11,000-kilometer pilgrimage -- and offer the kingdom a generous oil deal it can’t refuse.


Zev Chafets
Zev Chafets is a journalist and author of 14 books. He was a senior aide to Israeli Prime Minister Menachem Begin. -- Ed.