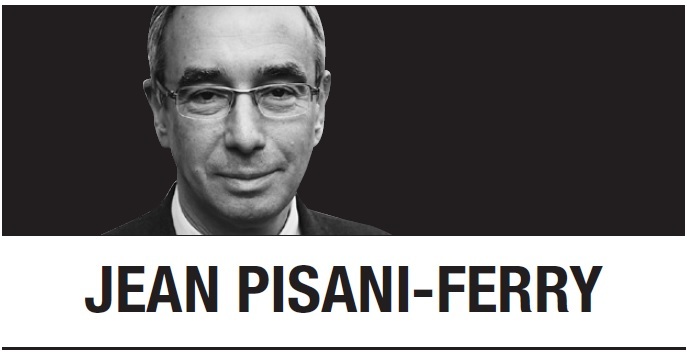 Eurozone consumer prices increased by 5 percent year on year in December, while the number of Google searches for “inflation” has recently risen threefold in Germany and tenfold in France. So, at first glance, it is difficult to avoid the impression that Europe -- like the United States, where annual price growth has hit 7 percent -- will have a tough time taming the inflation dragon.

Having dismissed concerns about rising prices for too long on the grounds that the main risk was deflation, the European Central Bank, like the US Federal Reserve, is now on the defensive. Critics accuse the ECB of being dangerously behind the inflation curve, and of having neglected its overriding mandate: to ensure price stability. Some claim that, after years of adventurous quantitative easing, the day of reckoning has arrived.

Both the Fed and the ECB can certainly be blamed for not having spotted the current price surge early enough. But that is no reason to lump together the US and the eurozone. Contrary to the widespread belief that inflation is back for good on both sides of the Atlantic, the outlook for the US is fundamentally worse, for three reasons.

First, under former President Donald Trump and his successor, Joe Biden, the US tackled the fallout from the COVID-19 shock with a massive fiscal stimulus. From March 2020 to September 2021, money transferred to households and businesses in the US through exceptional tax cuts, top-ups to unemployment benefits, debt forgiveness, and other schemes amounted to a whopping $2.5 trillion, or more than 11 percent of pre-crisis GDP.

Europe, meanwhile, was paradoxically more generous and thriftier at the same time. When French President Emmanuel Macron announced in March 2020 the launch of a massive furlough scheme whereby the government would pick up the wage bill of employees idled by the pandemic, he said loud and clear that the state would fulfil its responsibility to protect, “whatever the cost.” Not everyone in Europe said the same, but virtually all governments adopted the same position. For a while, there was no budget constraint anymore, and the ECB stood by to help governments do their job.

Citizens were understandably stunned. But the French furlough scheme, despite having at one point covered 40 percent of the workforce, eventually cost a mere 1.4 percent of GDP. As public health improved and people returned to work, furloughs quickly dwindled. All in all, the total fiscal cost of supporting households and firms remained around 3-4 percent of GDP. Europe, unlike the US, did not throw money at pandemic-induced economic problems indiscriminately. Household income was maintained, not increased. As a result, there was no massive excess demand.

The second factor is that furloughed workers in Europe retained their labor contracts and the associated employment security. True, temporary workers and those on fixed-term contracts paid a high price as a result of the COVID-19 crisis, and new entrants into the labor force also struggled. But, on the whole, European states acted like insurers and protected workers and employers from a devastating shock.

So, it should be no surprise that Europe’s pre-pandemic labor force remained largely intact once the worst was over. US policymakers, in contrast, are still wondering what caused 2.7 million workers to disappear during the crisis, and how to avert multiple bottlenecks in an economy where a demand overhang coexists with supply constraints.

In both Europe and the US, many are considering whether to change their job, employer, or sector, and many firms are struggling to hire. But this is not the same as withdrawal from the labor force. With hindsight, the European social model has proved more effective than its US counterpart in ensuring workers’ continued participation.

The final reason why inflation threats are more worrying in the US is that the Fed had explicitly committed itself to keeping its powder dry. Back in August 2020, Fed Chair Jerome Powell unveiled a new strategy whereby policymakers would aim to achieve prolonged above-target inflation after a period of below-target inflation, and would also seek to promote “maximum employment.” The quid pro quo for such a bold rethink should have been a responsible fiscal policy. But now that Congress and the president have made the opposite choice, the Fed finds itself forced to change course precipitously.

A decade ago, Europe’s response to the financial crisis was a disaster. But now, with a more effective social model and more targeted fiscal support, Europe has managed this crisis better than the US has. And while it certainly must address its own problems, neither the policy challenges nor the solutions are identical to those being discussed in Washington. As Laurence Boone, the OECD’s chief economist, recently told eurozone finance ministers, there is no reason to tighten fiscal policy in the eurozone, and at this stage no reason to attack surging, but still mainly energy-price-driven, inflation by raising interest rates aggressively.

Although inflation in many Western economies is at its highest level in decades, the story is not the same everywhere. As US inflation jitters increasingly permeate markets, European policymakers will need to remain composed and stay focused on the tasks at hand.