Park is the executive director of Newways, a nonprofit organization that she founded about a year ago with a friend she met at a book club. The organization’s goal is to discover rookie politicians who speak the same language they do, and foster them as city or provincial councilors who represent young people’s interests.

“Before we started this, I found politics too boring,” Park said during an interview with The Korea Herald. She has been exploring ways to make social change as a student activist for human rights and as an accelerator at a venture capital firm investing in social impact startups.

Despite requests and petitions lodged by people to tackle social issues such as digital sex crimes that made headlines in 2020, policy responses -- if any -- were made at a snail’s pace and often lacked sustainable plans.

“A destructive change was necessary which cannot be made by one individual’s competence. I realized that we need to gather the influence of various individuals and ultimately change the face of decision makers,” she said. “Because the current decision makers belong to a group that is far removed from where we belong.”

To do so, she aimed for local elections which elect the largest number of local, not national, legislators -- over 2,900 -- who make decisions closely linked to people’s daily lives. 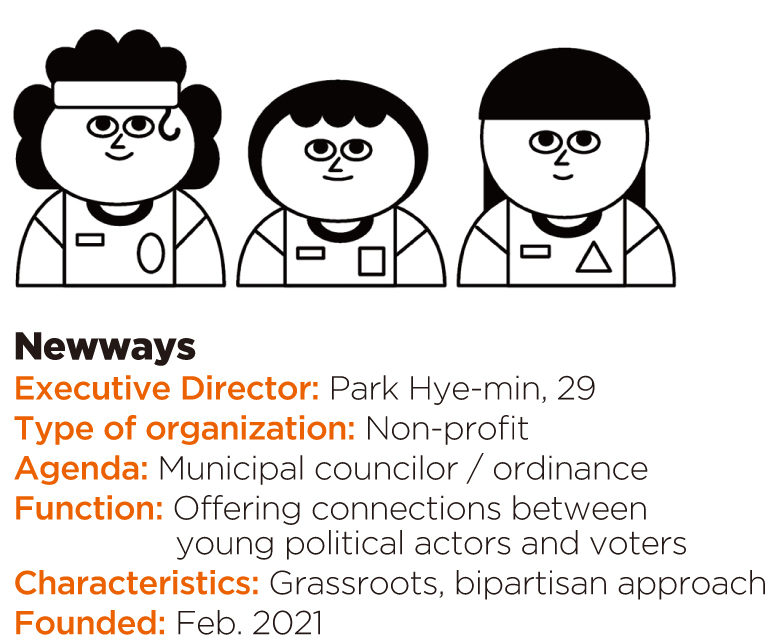 A call for diversity in nation lacking young politicians

Under the catchphrase “Korea is a country with a serious lack of young politicians,” Newways encourages more youth to run for local elections and have their say about politics to reflect their perspectives, experiences and priorities on the municipal decision making process.

“Young people are often excluded or overlooked as political candidates. Politics is typically regarded as a space for politically experienced men,” she said.

Among 226 local assemblies in South Korea, about half of them have no councilor aged under 40 at all. “Assemblies need to be diversified. People with different life experiences and from different age groups can make better decisions than those from strongly homogeneous groups,” she said.

Seeking to tailor its concept to suit a young audience, Newways conceptualize itself as a “management agency” that fosters young politicians, whom they likened to athletes. The June election will be their debut stage. Voters who register to be a member of Newways are called “casting managers,” who are like agents that discover athletes and support them to win games.

Within less than a year, the site has so far garnered some 6,500 casting managers. Eighty-seven percent of them are those in their 20s and 30s.

Park said that she started Newways out of curiosity, asking the question: “Would it be possible to create a system that could bring about changes by connecting individuals and their power of influence?” Park added that becoming a game changer in politics is not her goal.

Her “connecting the dots” hypothesis asks the following questions: What if voters believe that they can practically exercise their influence on politics? What if political rookies prepare for the candidacy process with others’ help, and not just on their own? What if experienced political seniors share their knowhow with newcomers?

To connect these various dots, Newways sends out videos of interviews it films with sitting young councilors to its members in order to inform potential voters of the ordinances the politician proposed and enacted, and how they changed the district the voters live in.

It holds online meetings for them to discuss issues of concern for young people ranging from childcare services for working parents and one-person households, to climate change problems.

“There are many casting managers who say that their perspective on society and their attitudes towards politics have changed a lot. Witnessing such transformative experiences makes me stay motivated,” Park said.

As of January, some 200 people have expressed their willingness to become young politicians through the platform. Of them, some 120 people have decided to run for the 2022 local elections.

The list includes a theater actor who wants to make changes in the arts and culture scene, a self-employed man hit hard by the pandemic, and a stay-at-home mother who decided to enter politics after gaining an interest in education issues for her children.

Seven political parties struggling to attract young members in their 20s and 30s have signed memorandum of understanding agreements with Newways, including the main opposition People Power Party.

“At the end of the day, what I want from young politicians fostered by Newways is putting their top priority on voters when making decisions,” Park said.