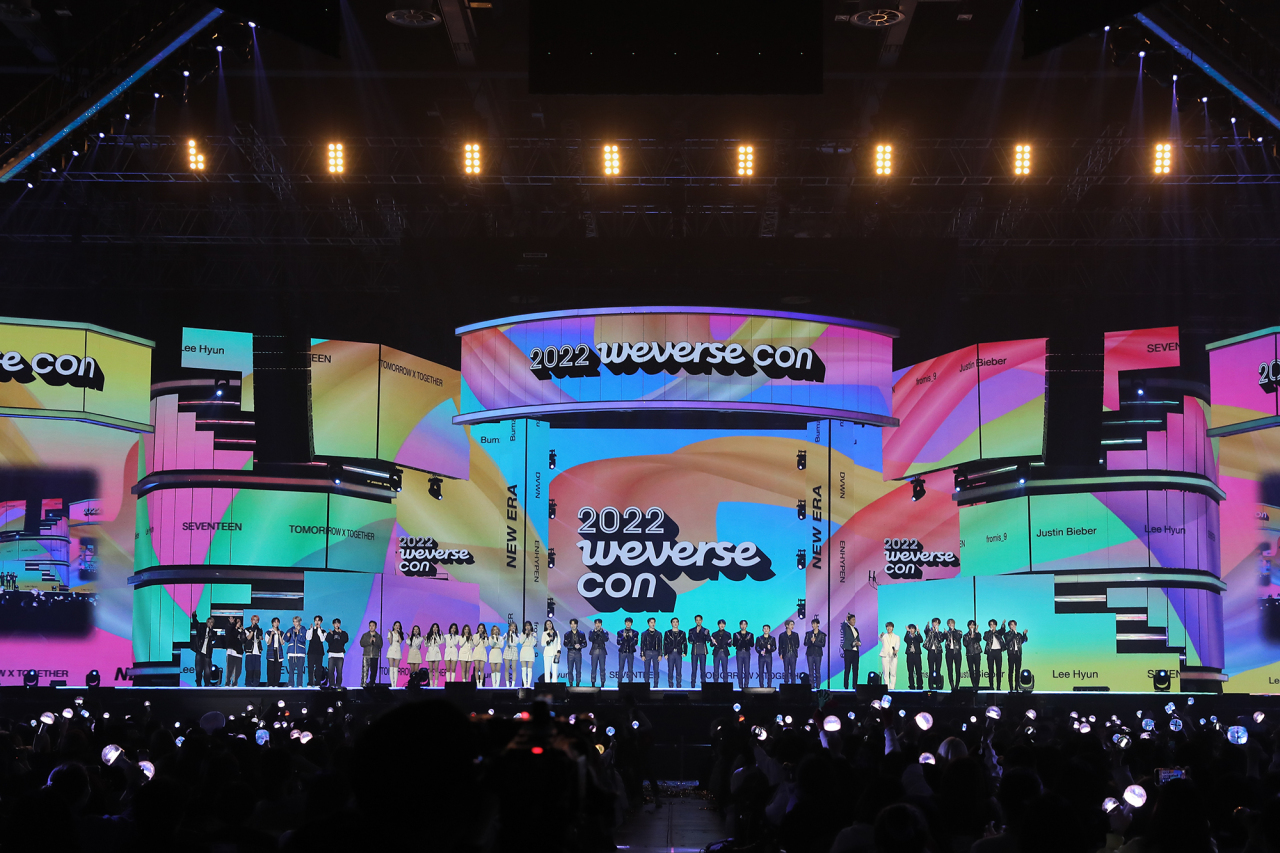 Taking place Friday night at the Korea International Exhibition Center in Goyang, Gyeonggi Province, the concert was held in front of a live audience and livestreamed through the agency’s fan community platform Weverse.

Hybe’s biggest band, BTS, did not take part in the event as the members are away on a long-term vacation, following their “Permission to Dance On Stage” concert series in LA.

Friday’s concert was themed “New Era,” a message dedicated to the artists and fans who have endured the rough time of COVID-19 pandemic together to now herald in a new age.

Enhyphen kicked off the 230-minute show, with four of the act’s biggest hits: “Drunk-Dazed,” “Fever,” “Blockbuster” and “Tamed-Dashed.” 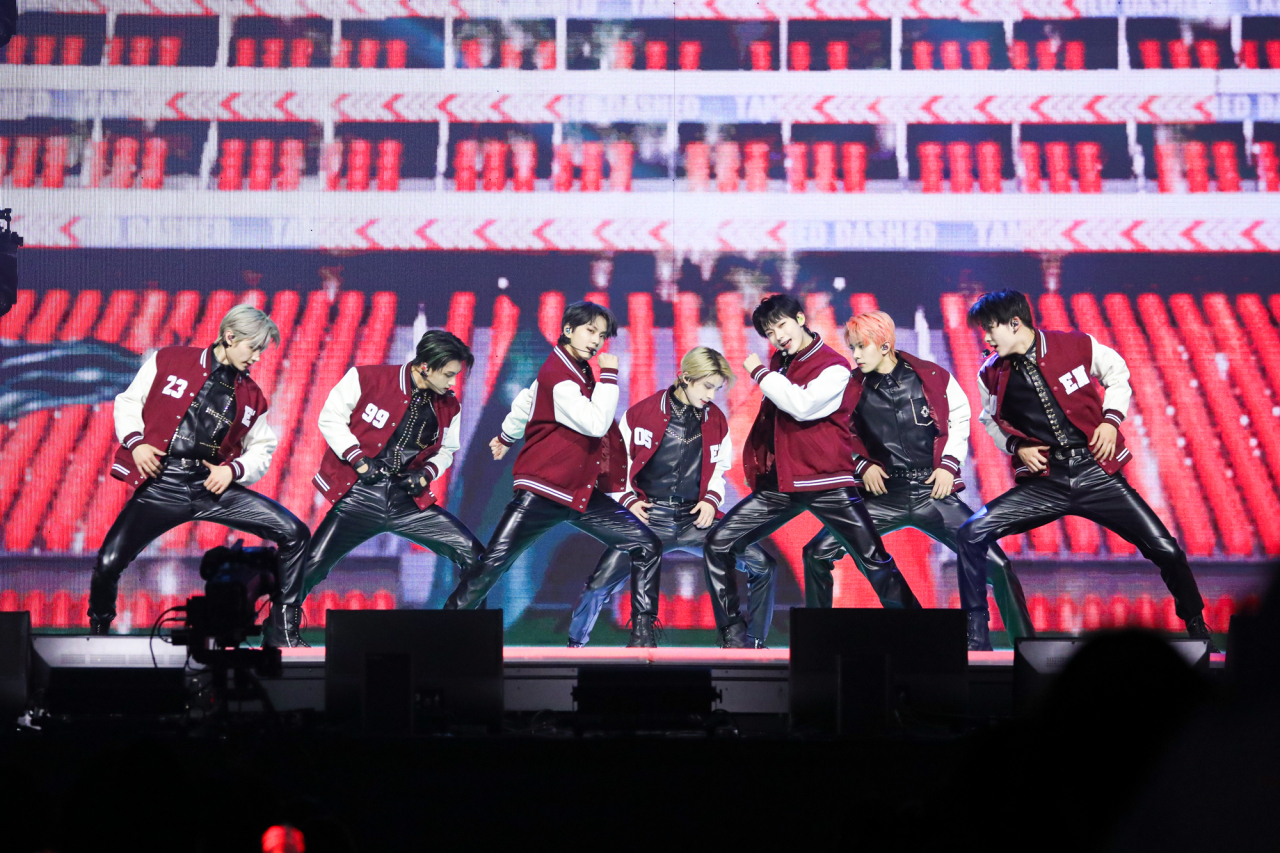 Fromis 9 added to the festivity with “Feel Good” and “We Go,” followed by a snippet from what many assume was their new song. The band is set to drop their fourth extended play “Midnight Guest” on Jan. 17.

In between the performances were talk sessions in which artists spoke with global fans and shared their new year’s wishes.

It was a big night for Enhyphen, who were performing their first live show in front of their fans, known as Engene, having debuted in November 2020.

“I hope the day soon comes when Engene can throw off their masks in our concerts and cheer and scream as much as they want,” Jae said.

Jungwon added, “We performed together with TXT’s Yeonjun today. We really enjoyed preparing for the stage, and we hope that we could collaborate with other artists next year.”

Song Ha-young said, “Our bliss comes from your happiness, so please stay happy.”

Lee Seo-yeon echoed the sentiment: “Staying healthy is my top goal next year, so that we could meet more often.” 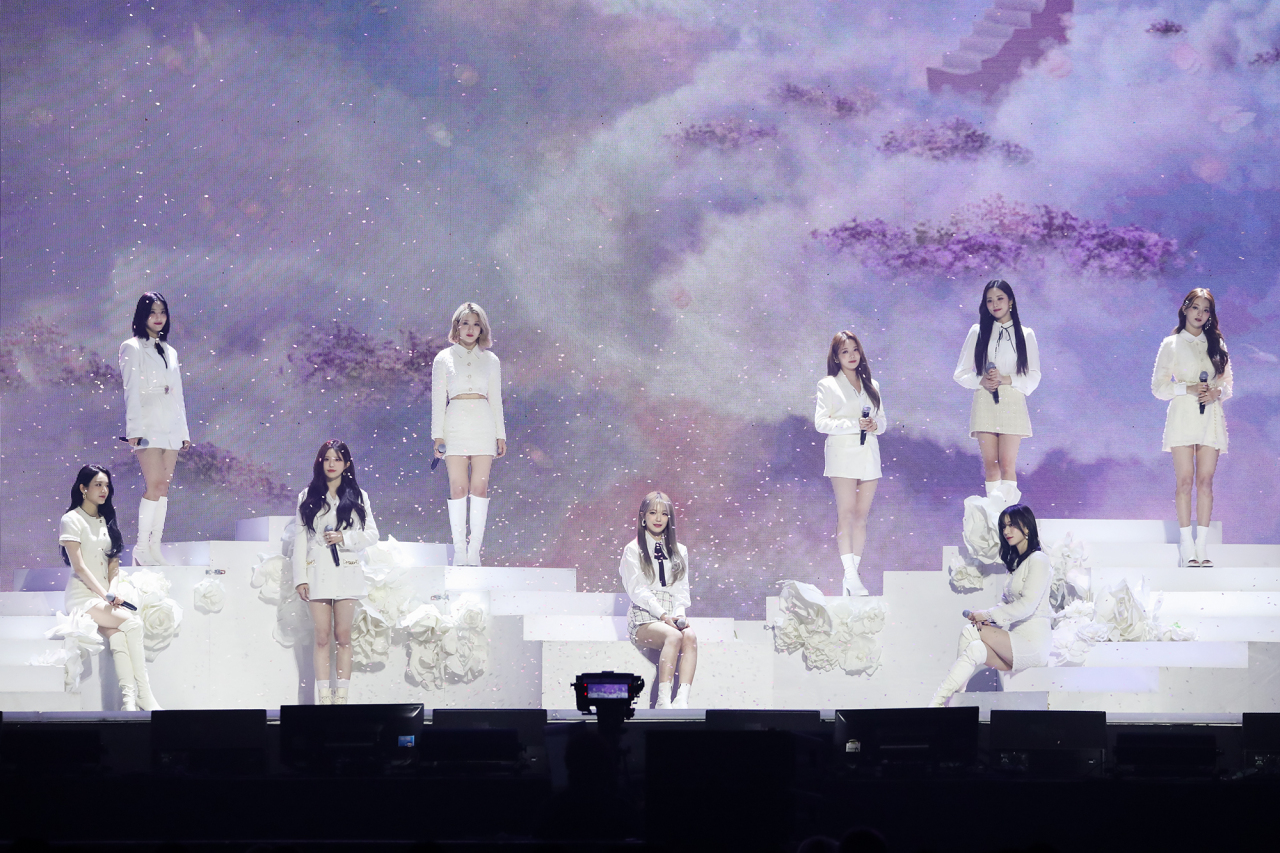 Also a producer, Bumzu has teamed up with many Hybe artists, including Seventeen and BTS. One of his most recent collaborations with BTS includes Jin’s single “Super Tuna,” which took the internet by storm.

“I want to thank Jin for giving me the chance to collaborate with him on such great work,” Bumzu said. “I hope we meet again when he recovers. It was my first attempt at such genre, and it was fun.”

Jin is currently in isolation after he was confirmed to have the COVID-19 virus last week, along with bandmates Suga and RM.

A chunk of the concert was dedicated to celebrating the 30th anniversary of legendary South Korean boy band, Seo Tai-ji and Boys.

Each artist recreated songs of Seo and the band in their own style. 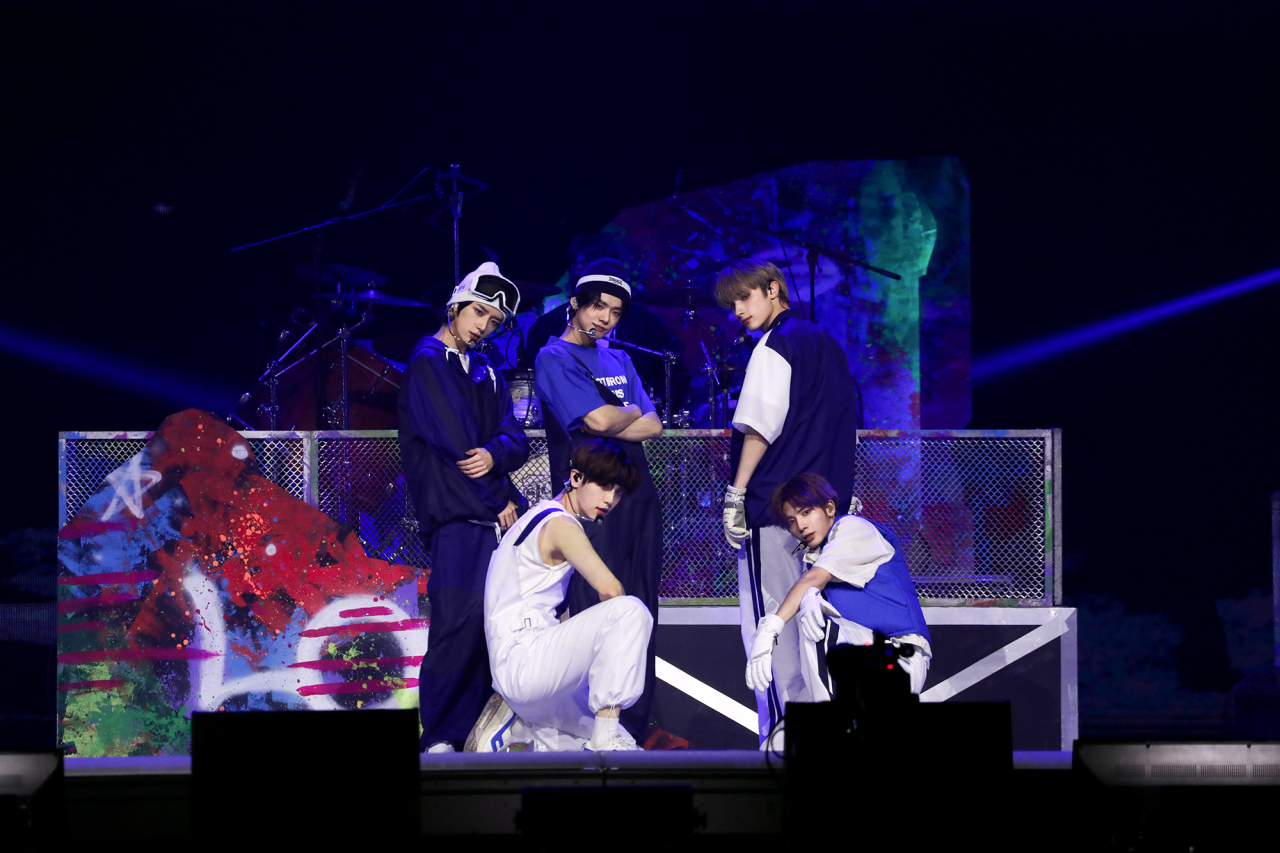 Singer-songwriter Dvwn brought the warmth to the stage with “Fairy,” “Last,” and “Burn the Memory,” while veteran balladeer Lee Hyun took the fans on a time travel with five hits from his expansive discography, including “I Was Able To Eat Well” and “Without a Heart,” as well as his recent release “Moon in the Ocean.”

TXT, with only five members, managed to fill the venue with explosive energy. Kicking off with pop-rock tunes “0X1=LOVESONG (I Know I Love You)” and “Anti-Romantic,” followed by “Frost,” highlighted with Huening Kai’s solo performance. They followed up with a mashup of “No Rules” and “Magic,” before closing with “LO$ER=LO♡ER.” 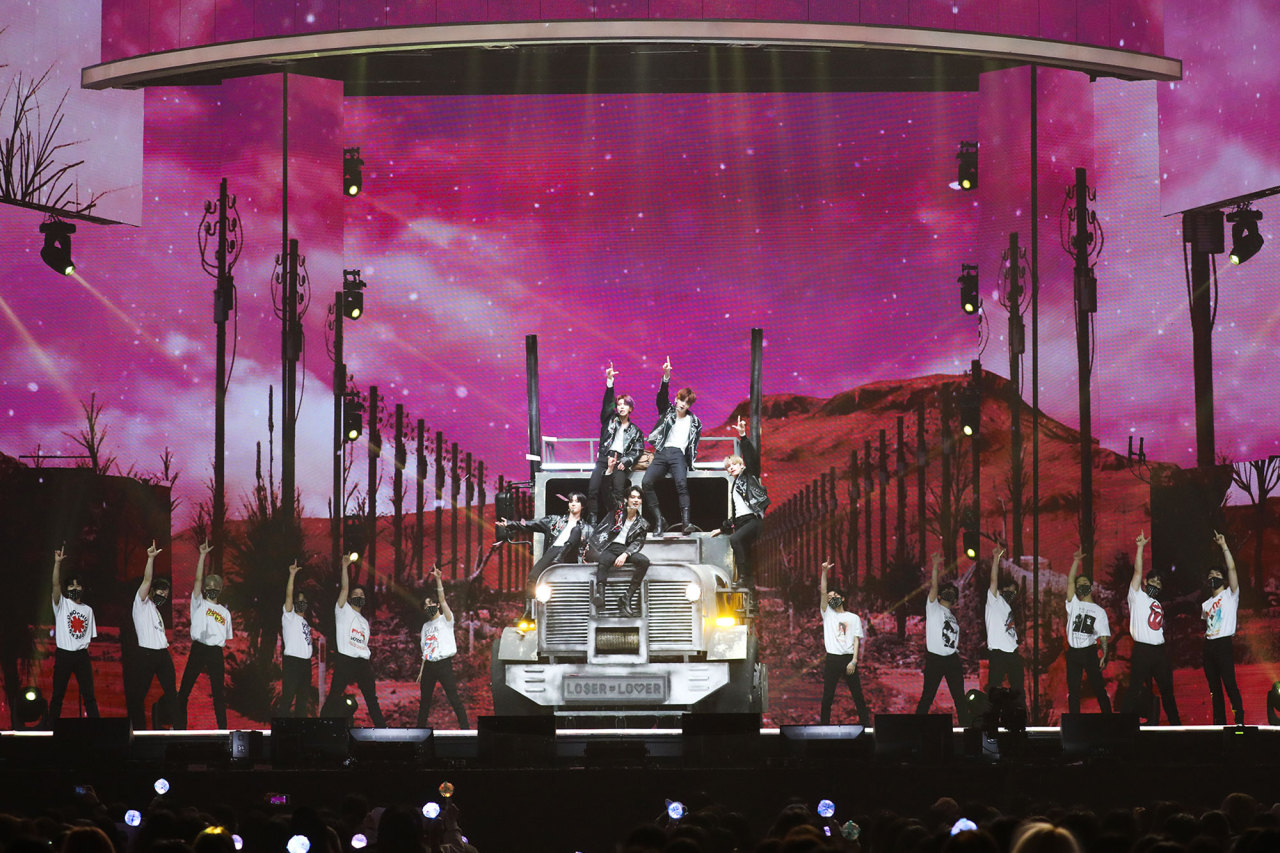 "2022 Weverse Con [New Era]" takes place on Dec. 31, 2021. (Hybe)
“We hope that you (fans) are always have and healthy,” Beomgyu said during a talk session. Soobin added, “Our biggest wish of 2022 is to make more opportunities like today to be with Moa (official fandom), and we hope you’ll give us bigger love and attention next year.”

One of the most-anticipated moments of the show, Justin Bieber tuned in via video link, performing with a live band on an indoor stage. He performed five songs: “Somebody,” “Hold On,” “Love You Different,” “Peaches” and “Anyone.”

They say the main star arrives last to the party, and Seventeen instantly shook the atmosphere with “Clap” and “Hit,” turning things up with “Ready to love,” “To You” and “Together,” before hitting the peak with “Left & Right” and “Rock with You.” 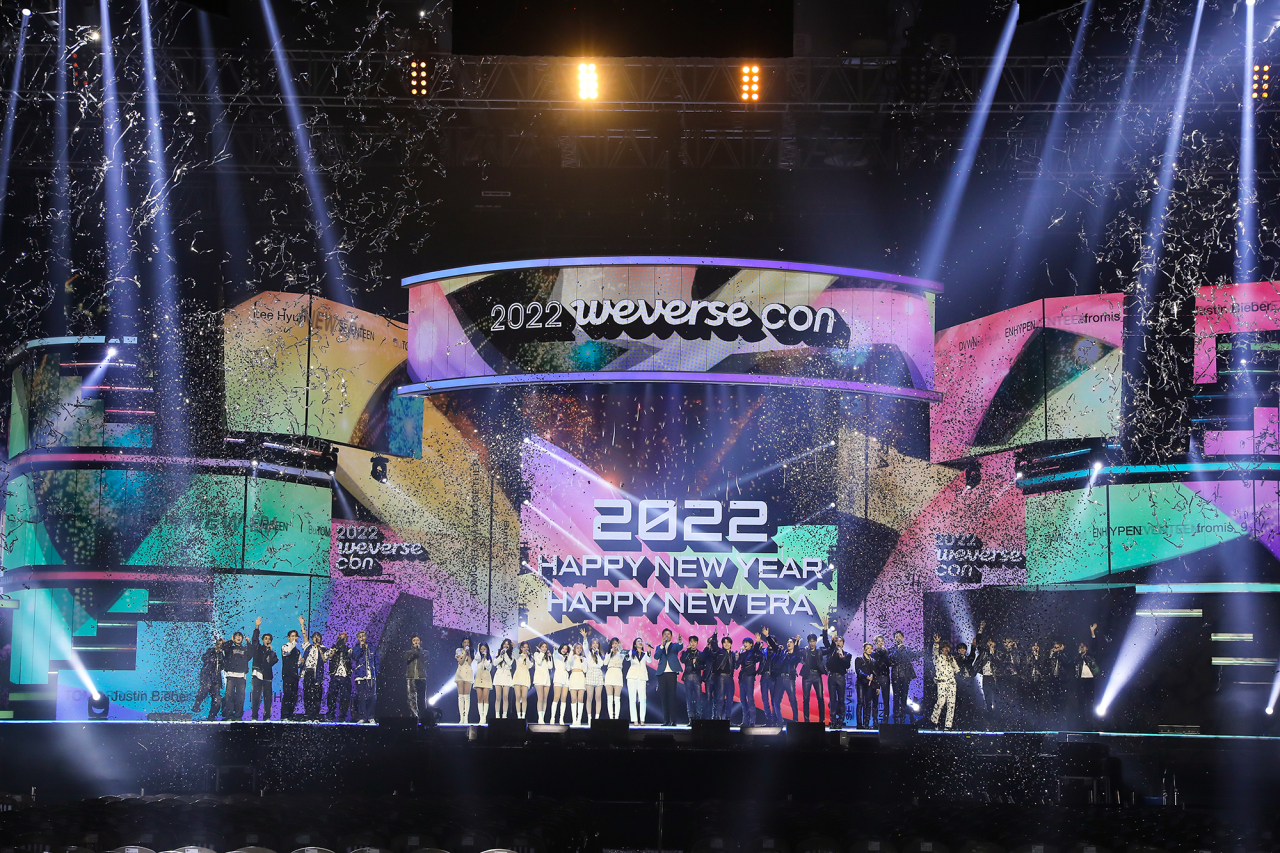 "2022 Weverse Con [New Era]" takes place on Dec. 31, 2021. (Hybe)
Wrapping up the night, the musicians marked the start of a new era by presenting their own definitions of the phrase.

“New era to Seventeen is just being with you guys, as we have done so since our debut,” Woozi said.

Hoshi added, ”The value of (being) together is the reason why we (Seventeen) exist.”

Enhypen’s Jungwon stated “infinity” as the group’s new era, explaining “We hope to find our own answers by embracing the infinite possibility of the team and our music,” he said.

“Rise above,” is where TXT’s new era lies, Soobin said. “We will endeavor to become artists who are not afraid of whatever that comes at us, overcoming everything to flourish musically and personally.”

Fromis 9’s new era will be led by their dreams, according to leader Lee Sae-rom.

“There’s a phrase from a tale that I like, which is, ‘It depends on where you want to go.’ Like such, we will always strive to reach our destination.”

The concert was followed by a New Year countdown at midnight.