[Us and Them] The whiter the better: Korea’s racist hierarchy 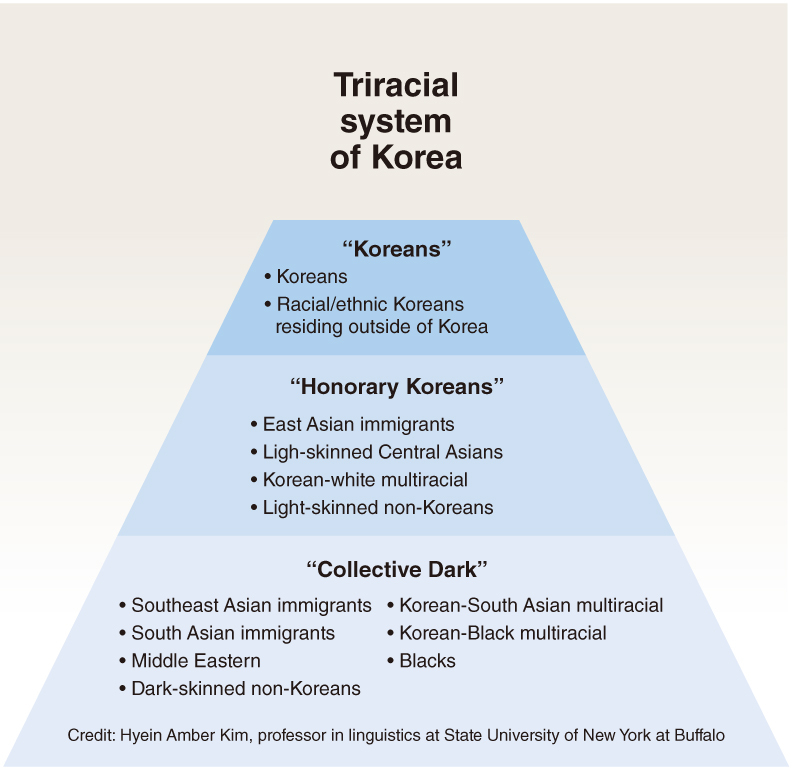 An unspoken “caste” system based largely on race and skin color persists in South Korean society.

In a matter of decades, Korea has grown into a popular destination for tourists, with iconic features like K-pop, culinary delights and cultural heritage items drawing travelers from all corners of the globe.

Yet the number who come here to live is relatively small, and foreigners and experts point to an invisible ranking system based largely on race and ethnicity as one of the factors that deters Korea from opening up.

According to a survey of 210 foreign residents conducted by the National Human Rights Commission of Korea and released last year, 44.7 percent of respondents said discrimination based on race exists in Korea, and 47.7 percent said ethnicity-based discrimination prevails in the country.

More than 24 percent of respondents said Koreans discriminate based on skin color.

The existence of this “caste“ system only corners Korea, making it an isolated nation, when other countries actively launch policies to draw more immigrants to boost their economies and offset population decline.

Experts agree that Koreans have a tendency to keep a distance between themselves and others, the length of which is shorter for those with lighter skin. Progress has been made slowly, but Korea falls far short of what is required of an inclusive nation, they say.

“Koreans’ social distance toward people from different countries has not changed greatly in the past 10 years,” wrote Kim Seok-ho, a sociology professor at Seoul National University, in a 2019 report.

“Both in 2008 and 2018, Koreans were most inclusive toward Americans and Europeans, while they considered being most distanced from the Chinese and Southeast Asians.”

Koreans tend to be more welcoming toward white people from developed countries but disregard those from countries with lower economic status, Kim wrote, adding that studies indicate this general perception is subject to change depending on how much interaction the individuals have had with foreigners.

“Those with high economic and educational background are very much favorable of Japanese, European and Americans, but those in lower brackets are very negative toward people from all countries,” Kim added.

A popular explanation for favoritism toward white people is that Korea has absorbed ideas about racial hierarchy from the US military forces stationed in the country, and that as a developed country Korean looks down upon those from economically weaker countries.

A survey of 207 foreigners in Korea by a local media outlet called the Segye Ilbo showed last year that 66.3 percent of respondents said Black people faced the greatest discrimination in the country, whereas 30.4 percent said this was true for those of Asian descent.

Only 1.4 percent of respondents said white people were discriminated against more than any other group in the country.

White expats like Chris Legg, a 35-year-old English teacher from Canada based in Gunsan, North Jeolla Province, tend to share that view. Legg describes Koreans as “very welcoming” and “helpful” in his experience, adding that he has never noticed any racism against foreigners here.

“I’ve been living in Korea for around 15 months but haven’t experienced any racism or inconvenience. Quite the contrary, actually,” Legg told The Korea Herald. “From stores to strangers, everyone has been welcoming. The few times strangers have spoken to me on the street, it has always been kind.”

Some scholars go further and argue that Koreans have drawn distinctions among those who look different from them, with some drawing out a specific hierarchical structure in explaining the phenomenon.

Hyein Amber Kim, a professor in the linguistics department at State University of New York, Buffalo, says skin color is inextricably linked to Koreans’ foundation of racial hierarchy, as seen in the way skin color and racial categorization have long been present in the Korean language when describing non-Koreans.

The racial order originally consisted of distinguishing Koreans from non-Koreans, but with the wave of migrant workers since the 1990s, the hierarchy became a three-way system, Kim says.

“It is impossible to fit everyone in Korea into the triracial order in the pyramid I presented,” Kim said in an email interview with The Korea Herald.

“However, it is a guide to better understand the overt and covert discrimination that people of color experience in Korean society because of their skin color and race.”

“The closer one is to having Korean skin color, the more possible it is to access power and privilege. In other words, the more you ‘look’ Korean and are closer to having Korean-ness, the less discrimination you may face,” Kim added.

“This is not a mathematical equation, though; it will be dependent on context, but in general, Korean-ness seems to operate that way.”

Kim also points out that Koreans have historically preferred those of light skin, linking skin color with social status, underscoring the influences of colonialism and Western imperialism. Migrant workers coming from developing nations as a result underwent harsher treatment in Korea as opposed to white people, she added.

While experts believe Koreans’ overall treatment of foreigners will improve, they said Koreans need to first become aware that racism exists and is a problem that should not be ignored.

“Racism in Korea is a normal feature of society and is embedded within systems and institutions,” Kim said.

“Because racism is so ordinary, and because Korean privilege is such a norm in Korea, some Koreans may not think certain actions are, in fact, racist or discriminatory. This is why I believe discourse and studies about race and color in Korea are so important.”

The concept of “us” is a strong force in Korean culture, and to be counted as “one of us” in any group comes with privileges big and small within its boundaries. However, for those who fall outside the boundaries of “normal,” life in Korea is riddled with hurdles and sometimes open hatred. In a series of articles, we take a closer look at the biases that exist in Korea, and at the lives of those branded as “them” by mainstream society. -- Ed.