Traces of literary figures remain in the rustic alleys of Seoul

By Kim Hae-yeon
Published : Sept 11, 2021 - 16:01       Updated : Sept 13, 2021 - 13:35
In celebration of National Reading Month in September, some 8,700 book festivals and related programs are planned to promote the classics and new works to the public, according to the Culture Ministry.Adults read an average of 10 books per year while school-age children read an average of 41 books a year, Culture Ministry data from early 2020 showed.

Culture critics attribute this significant drop in reading after the teenage years to “reading fatigue” stemming from pressure to digest books faster and more efficiently while still in school.

Indeed, book programs offered with good intentions are at risk of ending up as mere one-time events, so that the public perceives reading as just another task to be put off until it’s time for new year’s resolutions.

Though it takes some effort, once one successfully journeys into a book an exciting encounter awaits. And whether a book is fiction or fact, behind the creation and re-creation of the stories stand writers, unseen and unnoticed, but always present at the very moment one opens a chapter to read.

Finding the traces of literary figures and taking a moment to follow in their footsteps may be a relaxing way to explore the spirit of the well-known writers away from crowded festivals.

The Korea Herald visited four sites in the alleys and hillsides of Seoul where literary figures would drop by to read, write and contemplate on the issues of the day with their peers. The history of the four places dates back as far as the 1920s.

Lee Tae-jun, a Korean pioneer of short stories, lived here from 1933 to 1946 before moving to what is now North Korea. Lee named the house Suyeon Sanbang, meaning “a house by the mountains where people gather to read and study.”


While leaving the doors wide open at all times of the day, inviting poets and writers to drop by, Lee and his fellow writers organized a literary group called Guinhoe, which means “the nine-member association.” Kim Ki-rim, Jeong Ji-yong, Lee Hyo-seok and Gim Yu-jeong were among the members of the group, which actively resisted the proletarian literature that prospered in 1930s Korea and insisted on producing pure literature.


Lee’s granddaughter turned Suyeon Sanbang into a traditional teahouse in 1998, while keeping the name and preserving the studious atmosphere and the scenic view of nature from its windows. 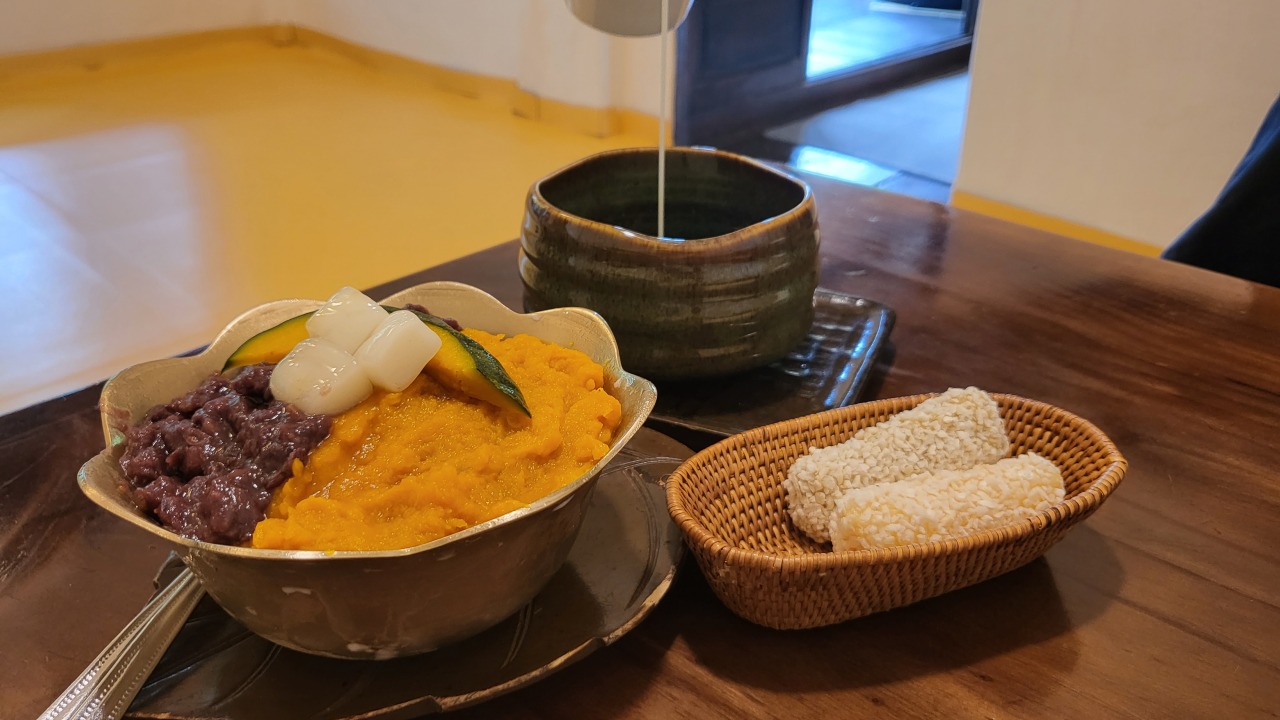 Shaved ice with sweet pumpkin and injeolmi, a type of Korean traditional rice cake, are the favorites at this teahouse. It features a front yard and a study where the Guinhoe collection and relevant archives are on display.

At Lee Sang’s House in Tongin-dong, a five-minute walk from Gyeongbokgung Station on Subway Line No. 3, Exit No. 2, literary works and paintings by Kim Hae-gyong, better known by the pen name Lee Sang (sometimes spelled Yi Sang) are on display with a video introducing the poet.

The space was brought back to life by the National Trust for Cultural Heritage in 2009 thanks to a public fundraising campaign. Now an exhibition hall stands on the site of the home where the poet lived for some 20 years, since the age of 3.

Born in 1910, the year that Japan annexed the Korean Peninsula, Lee studied to become an architect, hoping to make a living as an employee of the colonial government.

Lee began writing in the 1920s, delving into such themes as the endless search for spiritual resistance and the repetitive struggles of a broken mind. He subverted the rules of language and forms in literature, producing works that combined surrealist lexicons and sentences with coded numbers, and sketches and drawings featuring eccentric shapes. The writer’s modernist verses surpassed the public’s imagination and are still studied by scholars today.

Lee was imprisoned in the late 1930s for simply communicating with other Korean artists in Japan, and charged with thought crimes against the Japanese Empire. He died in a hospital in Tokyo at the age of 26. Representative works by Lee include a collection of poems titled “Crow’s Eye View” and the novella “Wings.”

“Two-thirds of the visitors come here by chance, and I feel the poet is slowly being forgotten by today’s young generation,” Lee Sang-hyun, publicity committee member of the National Trust for Cultural Heritage, told The Korea Herald. After spending years delving into Lee Sang’s life and work, he feels driven to pass on the writer’s legacy to future generations.

Admission is free of charge, and the archives can only be read on site.

A place to ponder freedom and democracy: Hakrim Dabang

A quote from culture critic Hwang Dong-il stands at the entrance to Hakrim Dabang: “Hakrim is still around somewhere between the ’60s, where ragged modernism and pernicious romanticism mingled, and the intellectual resistance of the ’70s.”

In 1956, long before Daehangno was established, a cafe opened across from the former building of Seoul National University’s College of Liberal Arts.

Hakrim Dabang was named after Hakrim-jae, an SNU festival. A “dabang” was a modest-sized coffee shop where small groups would gather. Among students of the time, the coffee shop was known as the “25th classroom.” After the lectures were finished in the college’s 24 classrooms, the coffee shop served as a place where freedom of thought and freedom of speech reigned.

Students, professors and writers alike would sit by the window on the second floor, looking down at the stream that ran under a small symbolic bridge. Just as the stream would change pace, flowing gently and then rapidly, the writing reflected different styles: At times it was romantic, but resistance poetry and literature predominated.

Sharing the painful history of the student-led April 19 Revolution of 1960, when the people rose up against the autocracy and corruption of President Syngman Rhee, Hakrim Dabang kept its lights on throughout the 1980s for writers and student activists to gather and plan a series of pro-democracy movements.

Traces of those who came and went can be found in the stairwells’ chipped paint, the love notes scribbled on the walls, and the dusty LPs and posters stacked by the entrance.

The signature drinks, Hakrim blend and Vienna coffee, are served both hot and cold throughout the year.

A cafe of love and friendship: Dok Dabang

Dok Dabang, short for Doksuri Dabang, is located on the eighth floor of a building across from Changcheon Church near Yonsei University.

Beginning in 1971, when it opened, the cafe was a favorite go-to place for writers of the era, including novelist Song Sokze and poet Gi Hyeong-do.

Born in 1960, Gi was a political science and foreign affairs major at Yonsei University and a member of the Yonsei Literature Club. Gi died at the age of 28. Song, who was the same age as Lee, studied law at the same school and still works as a writer, poet and painter.

Sinchon was a place where students from three nearby colleges -- Yonsei University, Ewha Womans University and Sogang University -- would gather in the ’80s and ’90s. Dok Dabang served as a meetup for love, friendship and camaraderie among the students. With no smartphones to send texts, students would post handwritten notes on the bulletin board, hoping they would be read by the intended recipients. Now an icon, the board still stands at the entrance.

In 2005, Dok Dabang faced financial struggles as franchise coffee shops came to dominate the streets of Sinchon. Upon reopening in 2013, the new owner designed the cafe to resemble a cozy library and divided it into different sections to suit the varied needs of visitors -- one section houses popular books, and there are also study rooms, meeting rooms and an outdoor terrace with a view.

Novelist Kim Young-ha mentioned the cafe a few years ago during a TV appearance, calling it one of his favorite places to read and write quietly. If you’re lucky, you might notice him there working on his next novel.